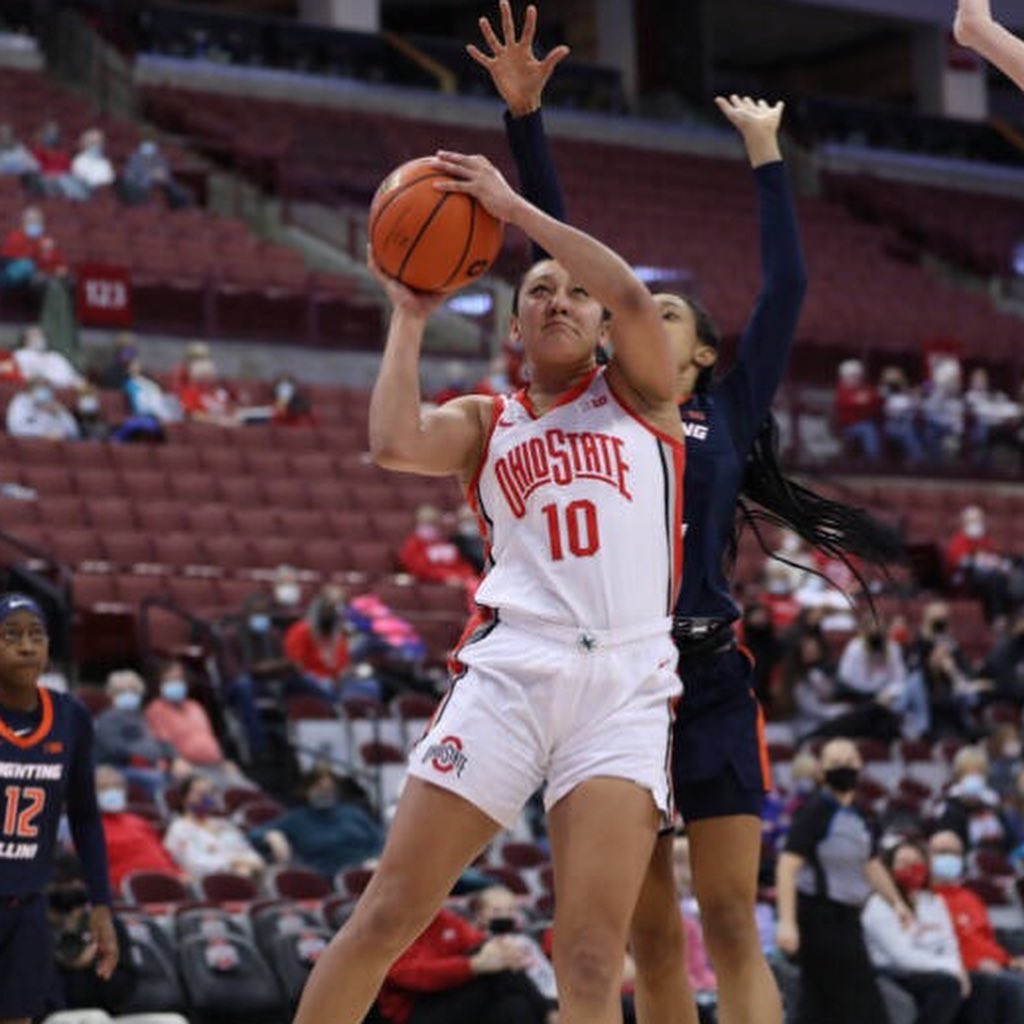 At the Value City Arena in Columbus, Ohio, the Ohio State Women’s Buckeyes Basketball team made it nine straight against Illinois winning the game 90 to 69.

Even though they are 10-3 this season, the Women’s basketball team is young, but there is still plenty of adjustments for the coaching staff and the players to make if they wish to distance themselves from the rest of the Big Conference.

Suppose the team wishes to make it out of conference play and compete against the best during the NCAA tournament. They have to work on communicating better with one another on the floor and start building confidence that they can compete with anyone.

Their loss to Indiana and Michigan by 19 points or more should have tested the team’s chemistry, passion, and hunger. Last year’s Oregon transfer, Taylor Mikesell, is a blessing to the team, but basketball is a team sport, so if the rest of the team members don’t start stepping up, they will just be ranking up individual stats, and it may not be enough when they have to face another top 10 opponents. Mikesell shot 8-14 from beyond the arc and scored 32 points against Illinois.

Sophomore guard, Rikki Harris, came up big for the Buckeyes shooting 4-5 from the three-point line and finishing with 15 points off the bench. This season graduate student, Tanaya Beacham, has also been a critical contributor to the Buckeyes. If she is not scoring, believe it or not, she will be getting both defensive and offensive rebounds to help the team. Beacham finished with 15 points, and the team-leading scorer, Jacy Sheldon, added 11 points.

In those losses to Indiana and Michigan, the team gave up more than 91 points. On average, the Buckeyes are only giving up 62.3 per game, but their scoring offense is at 83.5. So, they are winning by twenty and losing by twenty points in big games. 10th rank Maryland will be at Value City Arena on Jan. 20; it will be another challenging game for the Buckeyes. However, stealing a win at Northwestern on the 9th, at Michigan State on the 12th, and beating Minnesota on the 15th, means it could physically and mentally prepare the team for a showdown against the Maryland team that year and compete at the highest level.

Jacy Sheldon is the team’s leader in points averaging 19.3, and she has been consistent throughout the season, even with those losses. The team’s leading rebounder, Rebeka Mikulaskiova, started the season with back-to-back 19 points but did not score a single point in tonight’s game. “She had a great start to the year but has been struggling lately.” We have to help Rebeka get her confidence back because we need her”, OSU Women’s Basketball Head Coach Kevin McGuff said.

Before the game against the Buckeyes, Illinois last played a game on Dec. 22, 2021, due to positive covid-19 tests within their program. Buckeyes Head Coach, Kevin McGuff, shared his thoughts on games not played due to covid-19 health protocol. “There’s a lot of uncertainty, but we’ve been fortunate of only having some issues,” McGuff said.

According to CBS Sports, 128 programs on the men’s basketball side had to cancel some games because of a positive test within their programs or their opponent this season. So, positive testing affects not just college basketball but also professional sports. Last month, National Hockey League had to suspend a few games as cases of the Omicron variant were on the rise.

“We have to continue to march on, but the most important thing is taking it day by day. The coaching staff works with outside organizations to invite mentors to work with the team developing leadership within the players and building their confidence during this pandemic, McGuff added.