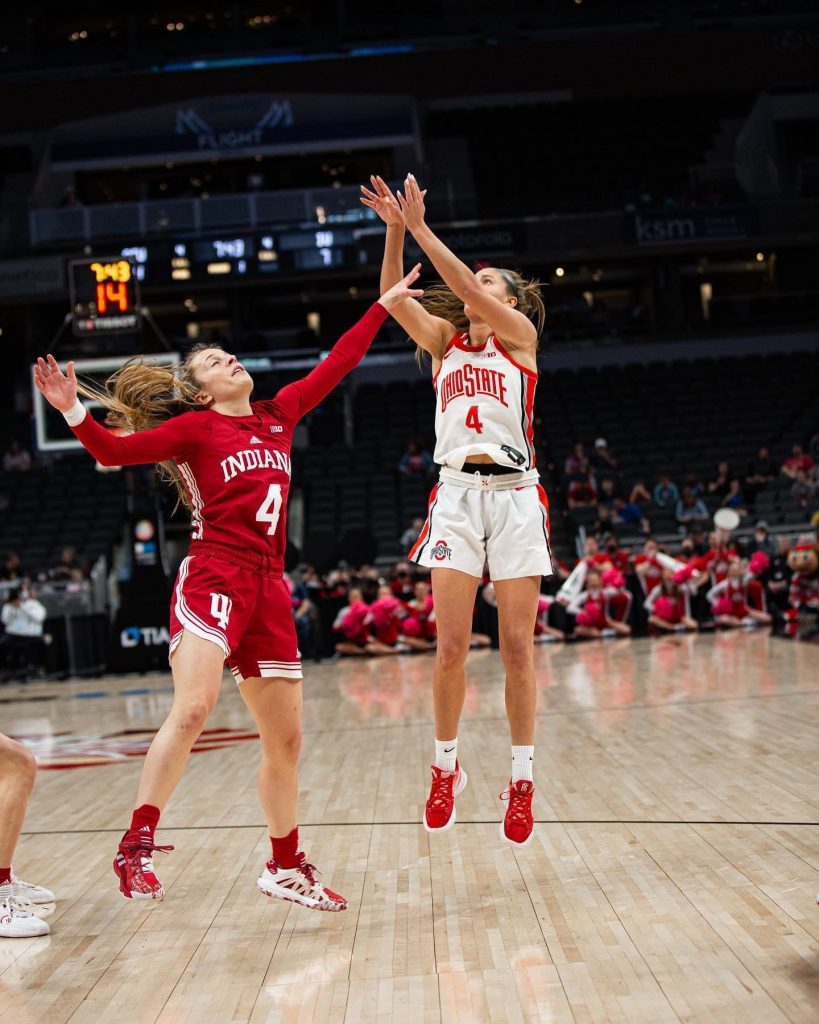 Despite falling to the Indiana Hoosiers and missing out on competing in the Big Ten Championship again after falling short in 2020, the Ohio State Buckeyes played their heart out during the regular season, even at this year’s conference tournament, till the very end.
There were many factors why Buckeye’s gas ran out while on the road with Indiana. The most obvious one was rushing their shots unnecessarily when they still had plenty of time left on the clock. Buckeyes did not lead in all four quarters despite keeping the game close; that was another factor. Hoosiers shot the free-throw twenty-three times, while the Buckeyes went 4 out of 4. Several of those calls against the Buckeyes were unnecessary, and the result was Hoosiers scoring seventeen points from the twenty committed fouls. Lastly, playing on the road against a home crowd can be challenging, especially during playoff or tournament season.
Both teams traded baskets back to back much of the game, but Indiana always found a way to close the quarter with a deep run. Down 68-62 with 46.8 left to go in the game, the Buckeyes turned to their defense, and it was effective, but the back-to-back foul calls against them down the stretch gave Hoosiers another possession of the ball.
Kateri Poole stole the ball with a .20 left, drove down to the other end, but missed the layup that could have cut the lead to 68-64. Hoosier’s Nicole Cardano-Hillary, however, grabbed the rebound, and Buckeye’s Sheldon fouled her, sending the Hoosier to the free-throw line. It brought the lead to 70-62, but a missed three-point attempt by the Buckeye’s Senior Braxtin Miller and a defensive rebound by the Hoosiers sealed the deal for the hometown team.
On the other side of the ball, the Hoosiers Coach, Teri Moren, told the team during the final two minutes of the game to, “Get a stop. Get a stop. Don’t foul, protect the three-point line, protect the arc, don’t foul and get a stop, stay locked in,” and sure enough, you know, they figured it out.
“I think that getting concise shots and outside shots is super important. Getting to the rim is significant for us and using that to even some ground and things like that. But I think if that, we’ll stick with and keep working hard and get into the gym and make sure that we make the correct adjustments with whatever the coaches think,” Buckeye’s senior Braxin Miller said.
When it came to the physicality of the game, “they’re very physical, and you can tell they have done a great job in the weight room, and they got size around the basket too, which bothered us as well.” Coach Kevin McGuff said. The physical toughness that the Hoosier brought has created many problems for the Buckeyes. It was also a factor for the Buckeyes when they lost by twenty points to the Hoosiers on December 12, 2021, during the regular season.
“Indiana’s a physical team, and so are we, so it was a physical game overall, and I think just staying together was our main focus there to stay in the game,” Sheldon also added.
The Hoosiers had a few flash moments that had the home crowd cheering and wanting more, but when Chloe Moore-McNeil dropped Braxtin Miller on the baseline while on her way to make a smooth layup, it had the place buzzing. Moore-McNeil finished the game with eleven points and went 3-5 from the field.
“We’re so talented at every position, so we believe we can score any time, like I said, any position. So tonight, we shot the three well, but we also shot the two well. But, as I said, the game plan was just to be us, and we were,” Hoosiers coach Teri Moren said
The guard play for the Hoosiers was the difference-marker; for example, #4 Nicole Cardano-Hillary, initially from Spain, dished out five assists, grabbed eleven rebounds, and efficiently drove the ball to the basket forcing the Buckeyes to fool her on a few occasions. She went 5-7 from the free-throw line but was not the only one forcing the Buckeyes to commit more fouls than they had anticipated while dishing out a few assists. #34 Guard, Grace Berger, was one of the players to watch and did not disappoint, finishing with ten points, dishing out seven assists, and grabbing pairs of rebounds to help her team.
What worked for the Buckeyes: The full-court press worked much of the game leading to the Hoosier’s committing eleven turnovers and Buckeyes stealing the ball seven times. Senior Guard Taylor Mikesell leads the team shooting 47.2% from the three-point line, and Jacy Sheldon is second with 38.5%. But the physical play of the Hoosiers left both players having one of the worst three-point shooting percentages of the season. Sheldon went 0-5, and Mikesell went two out of seven from the three-point line.
If the Hoosiers can play like they did today, getting all of the players involved from start to finish, not only will they catch the Big Ten Tournament, but they will put themselves in an excellent position to get a top seed in the NCAA Tournament. When the NCAA Tournament Bracket is released, the Buckeyes will find out which region they will be playing in and their seed. Hoosiers will play Iowa, who defeated Nebraska 83-63, to advance to the title game on Sunday, March 6, 2021.