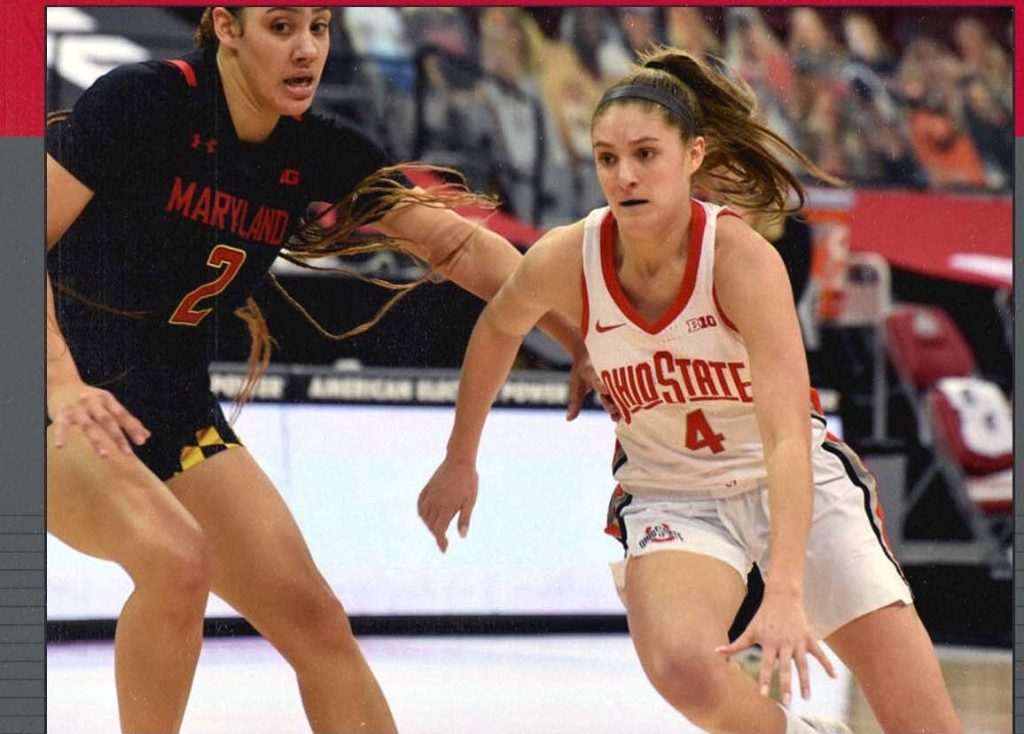 With a victory over number 12 Maryland, 2021-2022 team’s captain Junior Guard, Jacy Sheldon, scored her 1000 points while shooting a free throw with 13.8 seconds left to go in the game and finished the night scoring 24 points. Sheldon’s third season with the program has surpassed all expectations. Sheldon has that quick release, can pull on opponent at any time, and is not afraid to drive to the basketball to get that layup.

She is joining an exclusive club because scoring that many points and still playing at a high-level show that a player has put in a lot of work to compete against the best. The work ethic, consistency, and the ability to play smart to avoid injuries are essential to a team’s success and individual longevity.

Sheldon was ready to shoot the second free throw after making the first one, but her teammate quickly surrounded her to celebrate the milestone. At that moment, she didn’t let the milestone affect the team’s goal.

“I was more worried about making the free throw to win us a game,” Sheldon said.

In her four-year career at Led Coffman High School in Dublin, Ohio, she led the Shamrocks to a 94-12 record and was a five-star prospect ranking as high as #41 in the ESPN Hoopgurlz. She ended her career at the school averaging 28.3 per game her senior year, and while in college, she hasn’t slowed down. Many players don’t live up to the hype in college because they can pretty much do whatever they want in high school, but it is a different scenario when you are playing for a storied program or a HOF coach.

“Sheldon has a high Basketball HQ and is a great communicator on the court; because of that, her teammates respect her. Having the ability to run the defense and offense, she can direct her teammates on where to go, and they respond”, Buckeyes Head Coach Kevin McGuff said.

Stealing the victory over Maryland is not a one-person thing. Other players on the team have to know their roles and step up when their numbers are up. Taylor Mikesell is one of those players that the Buckeyes counts on to lead the way when things don’t go right. Taylor Mikesell spent her first two years playing at Maryland; therefore, her respect for the coaching staff and players will always feel like a homecoming visit.

“Her heart will always beat for Maryland, but she wanted to play well and suddenly had a great game, and we needed every bit of it,” Coach Kevin McGuff commented on Mikesell playing with her former school.

“It is all love with the Maryland program because they recruited me from high school. So regardless of my decision to leave the program, I made the decision that I did, but we still have that bond that is huge and unbreakable,” Mikesell commented on playing against her old team.

Graduate F/G Chole Bibby was a force to reckon with from start to finish for the Maryland squad scoring 20 points for the night. She shot 4-6 from beyond the arc and finished the night, going 8-12 from the court overall. The Terrapins had four players in double figures, and they were neck to neck with the Buckeyes for the last three quarters after a rough start. They had a better second-chance shot 27 times more than the Buckeyes, having just ten.

Although Maryland traded baskets with the Ohio State to keep themselves in the game, Buckeyes’ role players like Rikki Harris, Tanaya Beacham, and Rebeka Mikulasikova were also crucial contributors to help the team to win their first battle against a top 25 team. The Buckeyes will travel to Piscataway, N.J, to take on Rutgers on Sunday, January 23, 2022. While Maryland heads back home to College Park, they will also play on Sunday, January 23, against Northwestern Wildcats.