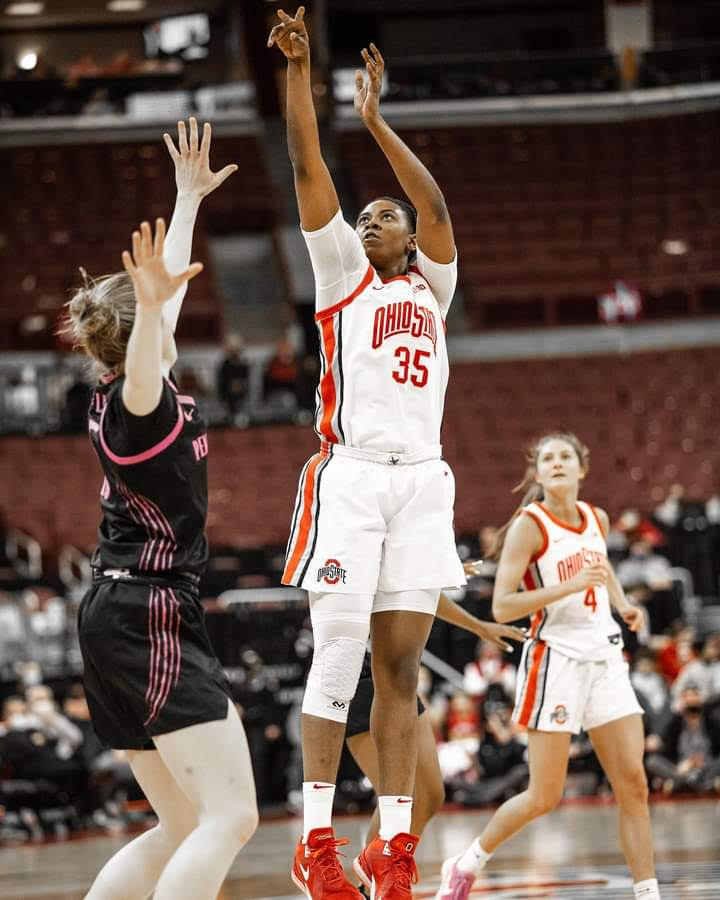 Columbus, Ohio- Value City Arena played a few timeless classics to keep the energy in the building going for their die-hard fans when the Buckeyes took on the Nittany Lions. They played the song “Hi-De-Ho” over the video monitor, sung by American Jazz Singer, dancer, bandleader, and actor Cab Calloway. They ended the jazzy and classic timeless playing “Twist & Shout” by the legendary group, The Beatles, and the fans sang along to all of the tunes while loving every moment of it. I almost got up and started dancing, but I had to remind myself where I was, ha.

Buckeyes women’s basketball might have let a game slip away from them last Thursday, February 17, 2021, when they lost to Maryland on the road 77-72. However, they are still a Big Ten conference title contender, so don’t count them out. On Thursday, they edged out Penn State 77-58 in their final home game of the season to finish 14-2 at home to prove just that.

Some may say they had to win against Penn State because they are 11-16 overall, but during this season’s NCAA Women’s Basketball games, about seventy unranked programs defeated the top 25 teams in the nation. So, anything is possible, and even the giant can fall.

They are second in standing in the Big Ten Conference play with an overall record of 20-5, 12-4 in conference play, 13-2 at home, and 7-3 on the road, and are winning a two-game streak. Despite losing to Michigan twice, and Indiana once double-digit, the Buckeyes might be the most formidable team in the big ten conference and now share the regular-season title with Michigan if they can win on the road this Sunday, February 27, against Michigan.

We are talking about a team that everybody wrote off after losing all-star player Madison Greene to a season-ending injury but found a way to get other plays involved to turn things around. Players like Tanya Beacham, Taylor Thierry, Braxtin Miller, and others have stepped up when it matters the most. Another critical contributor, Rikki Harris, overcame injuries to return to the line and has been sensational this season ever since. Then, of course, Junior Guard J.C Sheldon and Senior Guard Taylor Mikesell have carried the buckeyes on their back all season long.

“I’m a general out there; I look around, making sure everybody is in the right spot, see who needs help, and you know, calling things like screens,” she said. Beacham finished the game with 18 points, shooting 7-10 from the field, and grabbed five rebounds.

“It was not easy last year not to play in the Big Ten Tournament and NCAA tournament the previous year because of the postseason ban. However, this year we made sure that we did what we needed to, and it made a difference in making sure that they knew our name for sure when the post-season play begins in March,” Beachman added. Senior Guard, Taylor Mikesell, added 19 points to lead the way, making it her 21st game this season.

In recent games, the Buckeyes struggled to get second-chance points but did manage to outscore Penn State 16 to 6. “We play a little smaller and a little more spread out, so it always played our strength, but certain lineups were better than others,” Buckeyes Coach Mcguff Said.

So, statistically speaking, this was Kevin Mcguff and the squad’s all-around game where they dominated from start to finish for a long time. They had more points in the paint, going 34-24; a solid effort by the Bench outscoring Nittany Lion 16-32, but they’ve got to work on not turning the ball over; for example, they had 22 in this game alone. It’s no wonder Penn State kept the game close in the first half, being down only 18-13 in the first half, and had a solid third quarter holding the Buckeyes to only 17 points.

Nittany Lions look to make a big splash in the Big Ten Tournament for a chance to make it into the NCAA tournament this year after a disappointing season. The Nittany Lions are now 11-16 overall and 5-12 in the Big Ten after falling to No. 17 Ohio State. Penn State will close out their regular season playing against Minnesota, who is on a five-game losing streak but hopes to change that on Sun. February 27, 2022, in University Park, PA.

The Buckeyes close out their regular season on the road on Sunday, February 27, 2021, against Michigan State; tip-off is at 2:30 pm at the Breslin Center in Lansing, Michigan. After the season ends, the Big Ten Conference tournament starts Wednesday, March 2, and ends on March 6, 2021, at Gainbridge Fieldhouse in Indianapolis, Indiana.