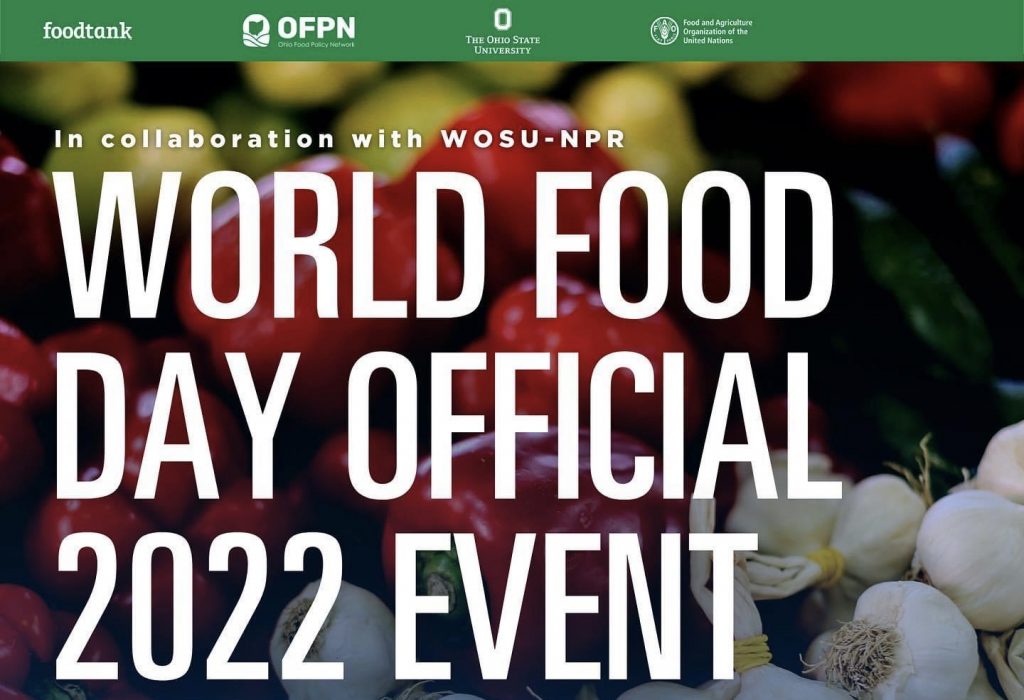 On a broader scale, almost 24 million households—including 11.6 million families with children under 18—reported that sometimes or often did not have enough to eat during the week.

If we opened the lens even more comprehensively, we’d see that the number of individuals facing hunger is a global matter and is more than we can stomach.

Why do people on this planet have food to throw away, whereas others have none to grab? It is essential to discuss how animals are treated that we consume, as well as how farmers and the food industry can produce more clean food options.

So, who is putting on their thinking caps to solve food insecurities? Well, in Ohio, the United States, and around the world, Food Tank, the Food and Agriculture Organization of the United Nations, and other Food Banks are among those working to end hunger, improve nutrition, and ensure food security.

World Food Day was established at its 20th General Conference in 1979 to commemorate the anniversary of FAO.

Approximately 150 nations continue to recognize World Food Day on October 16 as a vital day to acknowledge that many go to bed hungry, even in less-expected places like the State of Ohio. The day is one of the most celebrated holidays in the United Nations Calendar year because it addresses food insecurity and how the world can do more to find sustainable ways to fight it.

Joe Burrow, Cincinnati Starting Quarterback: When Joe Burrow, the starting Quarterback for Cinncinati Bengal, stated in his Heisman Trophy Acceptance Speech on December 16, 2019, that Athens County in Ohio, where he grew up, “is a very impoverished area and the poverty rate is almost two times the National average.” Believe it or not, so many children don’t have food on the table; that’s a global issue. People donated Over $500 thousands of dollars to Athens County Food Pantry in a short time.

“There are so many people there that don’t have a lot, and I’m up here for all those kids in Athens and Athens County that go home to not a lot of food on the table, hungry after school. You guys can be up here, too,” NFL Quarterback Joe Burrow said.

The Heishman Trophy helped lead the LSU Tigers to a Collegiate National Football title in 2020, runner-up in Super Bowl LVI as a member of the Cincinnati Bengals, and set up the Joe Burrow Hunger Relief Fund, which provides emergency and supplemental food to Athens County residents.

This year’s Theme is “Leave No One Behind”:

The Theme for this year is to leave no one behind and do whatever it takes to have better food production, provide better nutrition, address climate change, and promote healthy living. Choosing a specific theme started in 1982 by the FAO (Food and Agriculture Organization of the United Nations) and was vital because it helps give meaning to the cause.

In 2013, Food Tank, based in New Orleans, Louisiana, launched with one goal to take the bite out of global food system issues. They have been working to find sustainable solutions to fight food insecurity from an environmental, social, and economic perspective, specifically highlighting hope and success in Agriculture.

According to its website, Food Tank provides sustainable solutions for our most pressing environmental and social problems by bringing together farmers, producers, policymakers, scientists, academics, journalists, and funding and donor communities.

The tour involves partnerships with Academic Institutions and United Nations to focus on a sustainable way to alleviate hunger, obesity, and poverty around the globe.

Since the tour focuses on finding sustainable ways to help fight food insecurity from an environmental, social, and economic standpoint, it is perfect that their visit to Columbus falls on World Food Day.

“Whether we’re talking about climate, biodiversity, poverty, education, gender, or economic policy-the food system is a through-line that connects everything, and it’s beyond time for those in power to realize it,” President of Food Tank Danielle Nierenberg said on the company website.

In Central Ohio, the Ohio Association of Food Banks, and Mid-Ohio Food Collective, for example, are two of the organizations that focus on ending food hunger. Members of both organizations will also be attending this year’s summit.

* Mid-Ohio Food Collective: The largest food bank in Franklin County and one of the largest in the State, serving over twenty counties.