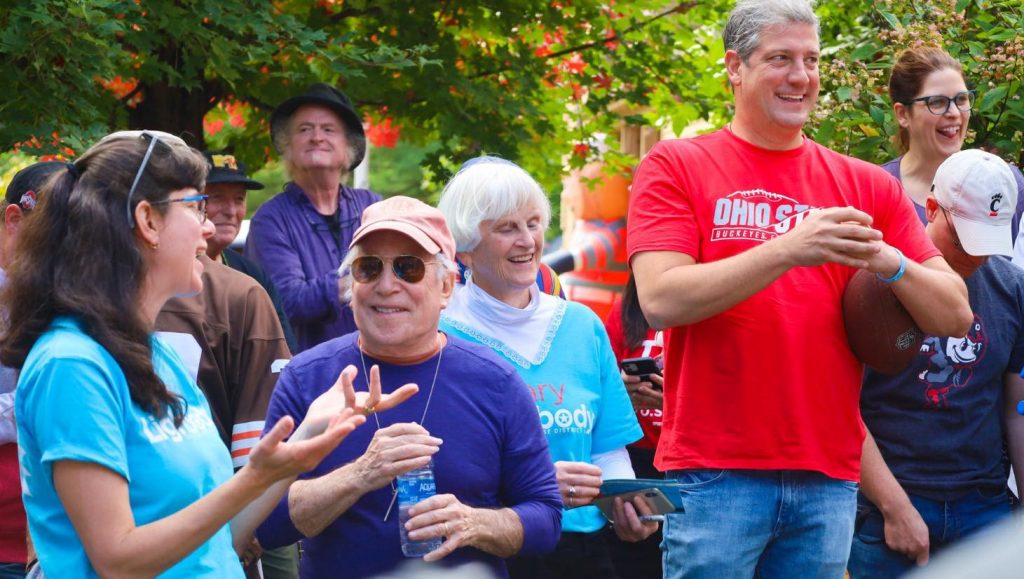 How often does a Rock and Roll Hall of Fame inductee show up and perform a timeless classic in front of your house? Not usually right, but when it happened to one local Gahanna resident on Saturday, September 24, 2022, at her front porch, it was a monumental occasion.

“Always be open to an experience, no matter how unbelievable (or exhausting) it sounds,” the homeowner said.

There will be some serious prepping to ensure your place looks like a million-dollar home when expecting visitors or when planning a significant canvassing event while juggling family, work life, and, on top of that, a legend coming to your house to clarify.

For all of you lovers of Folk Rock, I bet you have heard of the song “Mrs. Robinson” featured in the 1967 movie “The Graduate,” starring Dustin Hoffman. The song is about an entanglement between a young man and an older woman. No, I am not talking about Jada Pinkett Smith and her involvement with singer August Alsina. Although, in pop culture, the song comes to mind whenever there’s an extramarital affair between two people.

Like in the film, Hoffman’s character got into a relationship with the wife of his father’s law partner. So, the song, written by Legendary singer Paul Simon, and performed by Simon & Garfunkel, fit perfectly with the storyline.

I know I took too long to get to the artist’s name, but I figure by now, as you kept on reading, you would have put the two together. So, yes, Beryl, who is President of the Gahanna School Board, and eighty others stood in front of her house while listening to the creator of the song Mrs. Robinson performing “Me and Julio Down by the schoolyard,” the 2nd single from his self-titled studio LP released in 1972.

On campaign trails, candidates often invite celebrities, some of whom are singers, on stage at a rally to help fire up the crowds. The rally is usually at an open lot, an arena, fairgrounds, or somewhere in the downtown area. However, it was in a very private and intermediate residential neighborhood this time.

Singer Paul Simon, from the legendary group Simon & Garfunkel, came out to show his support for his friend, congressman, and US Senate hopeful Tim Ryan in Gahanna, Ohio. Any fan lover of music, specifically Folk Rock, has probably heard of the pairs.

Beryl Brown Piccolantonio, President of the Gahanna School Board and a member of the Gahanna Democratic, and friends most likely have had a few meetings or canvassing start up at her residence or come through her neighborhood; however, the one this past Saturday was one for the ages.

During the 2020 presidential election, several actors, politicians, journalists, and business leaders were campaigning hard for both presidential candidates. So, it’s not unusual for a famous person to campaign for a political candidate. Although, many folks believe they should stay out of politics. The number of celebrities supporting Biden over Trump probably made the Guinness world record.

The number of endorsements from various Celebrities was due to the global pandemic, ongoing biracial justice moments, economic crisis, and job market.

The Gahanna resident and her family not only had the opportunity to stand next to singer Paul Simon outside of their residence, but the excitement on their faces while helping fight for democracy was priceless.

It was a historic moment for the family and all the supporters and volunteers campaigning to help re-elect Ohio State Rep Mary Lightbody, State Senator Tina Maharath, and other local candidates. The special guest, of course, was Congressman Tim Ryan, who is running for US Senate this year as well, and Singer Paul, who just came out to show his support.

Throughout her life, Beryl has fought tooth and nail for democracy and helped individuals improve their communities’ quality of life. Her youngest had a chance to toss some football around with Congressman Tim Ryan, who once signed on to play quarterback for Youngstown University before injuries ended his playing career. Now, that’s what I call two for one.

“There are just so many of us who genuinely care about decency, integrity, the opportunity for all, and public education as the pathway to the American promise,” she said.

Beryl reminds everyone that it is their civil right to vote for democracy, and singer Paul Simon and the rest who were campaigning before and after 2020 understand that, so no matter which political party one supports, don’t forget to register to vote.

“Yesterday, we hosted an incredible canvass kick-off resulting in thousands of doors knocked on in support of pro-public education and pro-democracy candidates,” Beryl said.

Paul Simon doesn’t get political often but did endorse Hillary Clinton during her presidential run in 2016. “Lots to be hopeful about if we plug in and work to make that moral arc bend toward justice,” Beryl said.

The Ohio Chamber of Commerce will host the Impact Ohio Post General Election Conference on Thur ...

Nigerians in Columbus, Ohio will celebrate the country’s 62nd Independence Day at the OSDAA Aud ...

By Okon Ekpenyong Over two hundred people will head to the Filipinas Centre in Columbus on Sund ...