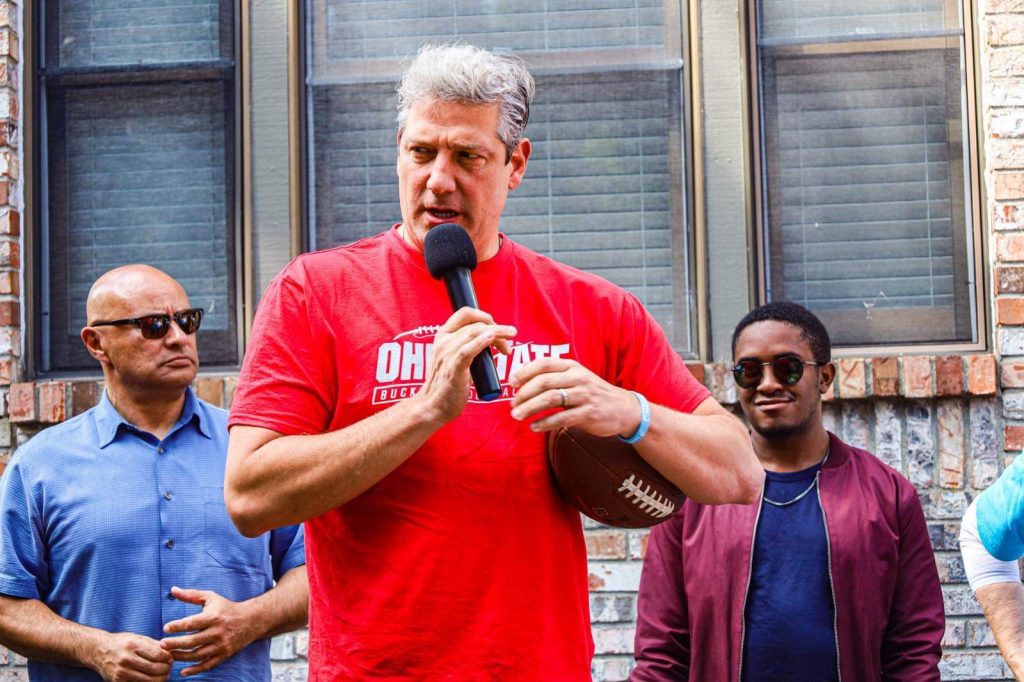 The Ohio Lawmaker, Tim Ryan was in Gahanna, Ohio, to join State Rep Mary Lightbody Canvass, Gahanna Democrats and friends, and the Ohio Workers First Campaign to knock on doors and talk to voters. Over eighty volunteers showed up, and Singer Paul Simon walked out of his tour bus to surprise the crowds and support his good friend Tim Ryan.

Congressman Ryan and Singer Paul Simon reminded political supporters that politics and music go hand in hand; they never sleep. One will find a correlation between the two by listening to national anthems, following political campaigns, and most patriotic songs. It is merely why the connection between music and politics is prevalent in many cultures.

All eyes will be on this Ohio U.S. Senate race closing, especially with only 45 days left until the November General Election. Ryan defeated Morgan Harper and others in the Democratic primary to advance. He faces J.D Vance, a newcomer who defeated Josh Mandel, current Ohio State Matt Dolan, and others in the Republican primary election. Recent polls show J.D leading Ryan by three to four points.

Paul Simon stated that he is an American First and does not particularly belong to any political affiliation, but he knew how vital the Ohio U.S. Senate race would be. “A friend of Paul Simon who lives here in Ohio knew how important the Senate race in Ohio was, and one thing led to another the singer was in Gahanna to help protect democracy,” Gahanna School Board President Beryl Brown Piccolantonio said.

“Sometimes, the hardest thing is ensuring people remember how essential every election is because local election matters a lot to your daily life. So, seeing these activists and singers take a stand by encouraging people to vote helps get the word out”, Franklin County Judicial Candidate Andria Noble said.

“I appreciate the opportunity to come into the neighborhood and talk to people to ask them what’s on their minds is a privilege for me to know the world on a more personal base. I am more interested in that than politics in general,” Singer Paul Simon told the New Americans Magazine.

Musicians, Actors/Actresses, and even sports figures have come under fire for decades from liberals and conservatives, saying to stay out of politics. But a Ryan Supporter asked, “Do people forget that everyone has a voice, including entertainers?”

President Ronald Reagan was first an actor before becoming the Governor of California from 1967-1975 and then the President. Singer and writer Sonny Bono, who found fame as a famous singing duo of Sonny and Cher, became a Mayor and then a congressman. The pair scored plenty of hits, “I Got You Babe” and “The Beat Goes On” were two of their most famous hits.

Paul Simon sang his legendary hit “Me and Julio by the Schoolyard” in front of over 80 volunteers, including current local, state, and judicial candidates, which was his second single from his self-titled Studio album released by Columbia Records in 1972.

The singer was also a part of the group called “Simon & Garfunkel,” forming the band with his good friend Art. They started touring together in 1956 before parting ways for good in 2010. They released five albums with multiple hits, including three number ones: Bridges over Troubled Water, Mrs. Robinson, and Sound of Silence. Both singers eventually went on to have a fantastic solo careers.

As a community leader for Somalian and New American residents, Burhan Ahmed told us that “everyone has a voice at the table and should exercise their right to vote in local and state races.”

“It was an exciting afternoon here in Gahanna because we had Congressman and U.S. Senate hopeful Tim Ryan and, yes, the singer Paul Simon helping get the crowds fired up for the door-to-door canvassing for State Rep Mary Lightbody and other candidates. The event would not have been possible without the hard work of Gahanna Democrats and friends,” Beryl said.

Kim Browne, Judge of the Franklin County Court of Common Pleas Domestic Relations and Juvenile Division in Ohio and a residence of Gahanna for many years, was also present at the event. “Simon stated that he is not a part of any political party, but he is here because of the issue. As judges, we are not political analysts; our job is supposed to be impartial and unbiased; that’s why Simon’s speech resonates with how democracy should work,” Judge Browne said.

“I believe Ohio is in an excellent position to lead this country again. If we merely listen to what others tell us of what can or can not happen, then we will not be here,” Congressman Ryan said. “Running for office in 2022 is a full-contact sport,” Ryan told the crowds. Ryan thanked the volunteers for canvassing and understood some of their sacrifices, especially spending less time with their families and friends to be here.

To vote in the Nov. 8th general election, all potential voters must register by October 11th to be eligible. The Board of elections will remain open by 9 pm on that day.