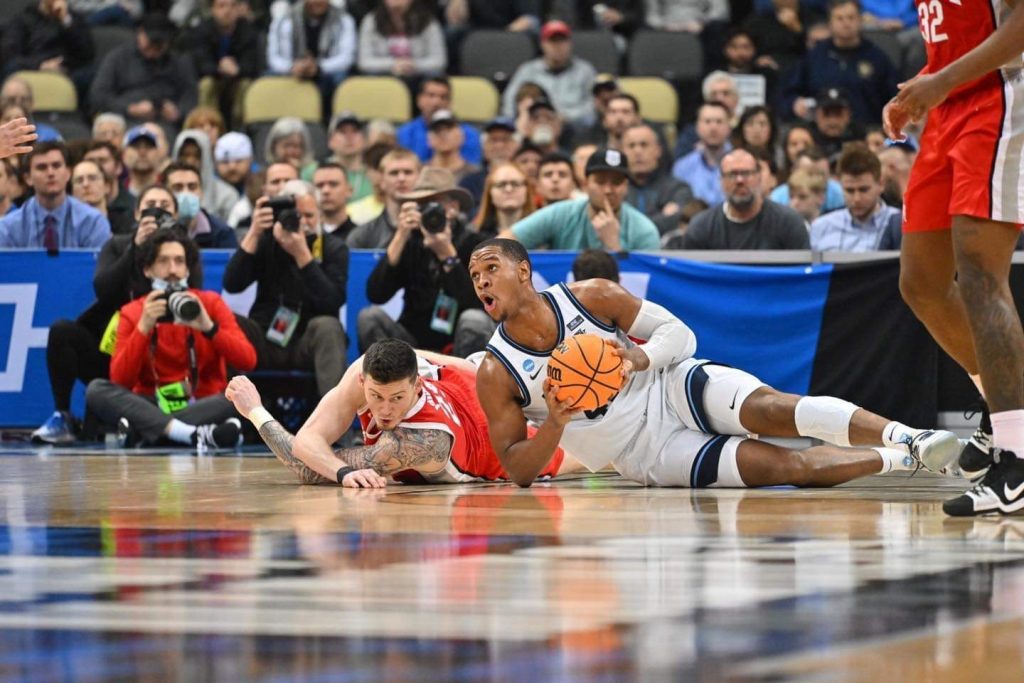 OSU Freshman sensation, Malaki Branham, has a mature playing style that does not require much coaching. Despite losing to Villanova by 71-61 at PPG Paints Arena in Pittsburg, PA, the Big Ten Newcomer of the year stepped up and showed everybody he could excel in the tournament’s most competitive environment.

#7 Ohio State and #2 Villanova played in Pittsburg at PPG Paints Arena for a chance to move on to the sweet 16. It was part of the South region featuring #5 Houston, #4 Illinois, #13 Chattanooga, UAB, #15 Delaware, and #10 Loyola Chicago. OSU fans filled up the arena in large numbers, and they had the shortest drive compared to all of the eight other competitors. Villanova also saw their supporters in large numbers, considering the campus is about 4.5 hours away and did not stop the fans from packing the arena. It was like a homecourt advantage for the Villanova Wildcats.

March Madness experience for the fans:

The Wildcats gave their fans something to cheer about in the first quarter as the team led 39-28, but the OSU fans remained hopeful that they had one more quarter to turn things around. Come second half, OSU Freshman Branham, who had an outstanding performance scoring 15 of his 23 points in the second half alone, played his hardest to rally a comeback that would have returned the Buckeyes to their first sweet 16 since 2013. However, he needed a supporting cast. Overall, the Buckeyes and Wildcats game gave the fan what they wanted to see, a competitive game, especially in the second half.

Villanova had four players scoring in double figures, and in such games, the Buckeyes can not rely on Branham and Liddell alone. Graduate Student Kyle Young was the team’s third option in scoring but left the game early, and he is under re-evaluation from concussion protocol. Young missed a few games last year and this year because of a concussion.

OSU Junior star E.J Liddell entered the NBA draft in 2021 but withdrew and returned to school. Some are predicting that he may enter the draft this year, and this is what he had to say, “I am now reflecting on this postseason and enjoying my moments with these guys (teammates). I am not thinking about that, and I have not thought about that process yet,” E.J Lidell stated when asked about his 00plans. Coming into this competition, Liddell averaged 19.4 points per game, shot 49% from the court, and against Villanova, he finished the game with seventeen points, six rebounds, and shot 46.2% from the court.

“Kyle Young makes a difference for us. He is a special kid and player. I love Kyle; he represents everything we want while competing at the highest level. Young is under concussion evaluation, and more than anything, Kyle is not pleased with today’s loss,” Buckeyes Head Coach Chris Holtmann said.

Kyle Young released a statement reflecting on his times with the team and the University. “I’ve loved every minute I got to play in a Buckeye uniform, and I am so grateful I had the opportunity to compete for this University. “I’m going to miss this with all of my heart, but I want to “say” thank you for all of the love and support over the years.”

“Against Delaware, we were a lot more effective from the three-point line, getting more threes. Ohio State did a great job of protecting the three-point line, but we did an excellent job of getting the ball inside in the paint resulting in twenty-six points,” Villanova Coach Jay Wright told Sportzkelz Media.

Coach Wright also added that “During this time of the year, when playing against a different team, you see where you can be effective. If you are only custom to one style of play, you will get knocked out early, so I was proud of our guys for recognizing those adjustments”.

Villanova’s Dixon comes into the second half unstoppable once again inside the paint. #23 Samuels and #43 Dixon’s physical strength continued to cause problems for the OSU defense. Despite being down 46-33 at one point, OSU Branham continues to lead the Buckeyes with a pull-up shot.

OSU Zed Key and Kyle Young started rebounding the ball on the court; it opened up the opportunity for the rest of the players on the floor to take some loads off Branham and Liddell.

OSU’s Zed Key’s eleven rebounds in the second half led the OSU back into the game. However, buckets were not dropping in for the Buckeyes in closing minutes with two minutes left. To make matters worst, #43 Eric Dixon of Villanova, who finished the game with 13 points, pulled a three to extend the lead to 67-59.