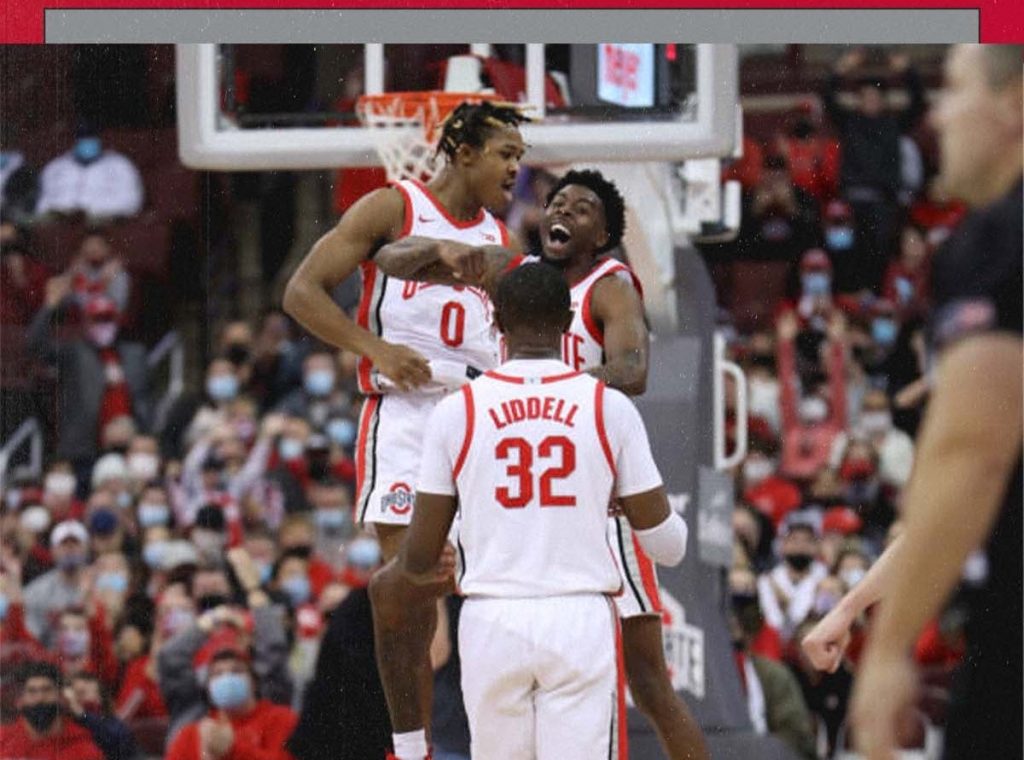 Holtman’s assistant stepped in when it mattered the most defeating Northwestern 95-87. Jack Diebler, Buckeye’s assistant coach since 2019, served as the acting coach after Head Coach Chris Holtmann and Assistant Ryan Pedon were out against Northwestern due to Health and safety protocols.

Like Northwestern Head Coach Chris Collins, Jack Diebler also grew up in a basketball family. Keith Deible, his father, and Jeremiah, his older brother, are high school coaches currently. Diebler played his collegiate ball at Valparaiso, located in Indiana, and the program is part of the Missouri Valley Conference.

Columbus Native and Buckeyes Freshman Malaki Branham had another big game shooting 13-14 from the courts and finished with 24 points for the night. During the week of January 3, 2021, the Big Ten Conference named him” Big Freshman of the week” after scoring 35 points in a win against Nebraska in Lincoln, NE.

Junior Forward E.J Liddell, the team leading scorer, had 17 points in the first half alone, and throughout the game, Liddell gave the crowds something to cheer when he played defense. He finished the night with five blocks, and in each of those blocks, it helped pump up the energy in the building eliminating any doubt that the Buckeyes were going to let the game slide and Northwestern to walk away with the victory.

At the press conference, both Liddell and Branham jokingly said that Head Coach Chris Holtman, who had to miss the game due to health and safety protocol, was probably standing up wherever he’s at, glued to the TV and saying, come on, guys. Both players sent their best wishes to the coach, and they can’t wait to have him back on the sideline.

Although Liddell and Branham were lighting up the scoreboards, a lack of communication on the floor within the team itself led to multiple turnovers for the Buckeyes. Some of those costly errors led to the Wildcats narrowing the lead from 15 down to four at one point.

In basketball, bench players should always be critical contributors to a team’s success. Zed Key and Cedric Russell came off the bench and helped spark the offense that almost let the game slip away, and despite the team’s three losses, the bench players have been outstanding this season, for example, when they helped take down the #1 team in the country, Duke Blue Devil, at home.

“We have confidence and put a lot of trust in our bench players. Multiple guys can come into games and make a huge difference. It shows that our debt extends beyond what we haven’t shown yet during each game”, Acting Coach Jack Diebler said.

In their first meeting of the 2021-2022 season, Badgers suffered a tough loss to Buckeyes, falling 73-55 on December 11, 2021. Next Thursday, January 13, 2021, the Buckeyes will travel to Madison, Wisconsin, to take on the Badgers. It will be a show-down, and as Coach Diebler said, we will need our bench players.

Coach Collins brings in a winning culture at Northwestern

Having a winning program requires a total commitment from everybody, including the school’s administration, the students, the fans, the alumni, and the community. Despite Northwestern University failing to Ohio State 95-87, under the leadership of its head coach Chris Collins, they are on the verge of turning the program into a winning culture.

The young Collins grew up in the basketball world where Doug Collins, his father, was the overall #1 player picked in the 1973 NBA Draft by the Philadelphia 76ers after a successful collegiate career at Illinois State. His father played on the same team as the legendary basketball pioneer Julius Erving aka Dr. J. After injuries forced Doug Collins to quit playing professionally, he started coaching, becoming an assistant in college, and later head coach in the National Basketball league. In 1986, he got his first break coaching Michael Jordan and the Chicago Bulls through 1989.

Head Coach, Chris Collins, has been with the team since 2013, and it is his first stop as a head coach. Chris Collins was around a player that many would consider the greatest Basketball player of our times, Michael Jordan, and for a kid, such an experience a heart dont forget something like that. So, yes, all of his life, he was around a winning culture, but life is about creating one’s “own” legacy. Collins is a former Duke player & assistant under the legendary coach Mike Krzyzewski. During his tenure at the school, the program appeared in their first NCAA tournament in school history in 2017. This year, he hopes to return to the Tournament and bring that winning culture back to the city of Evanston, Illinois.

“The Big Ten conference is hard to win, but we must find a way no matter who or where we are playing. We must play well for the entire forty minutes. It requires intelligent decision-making and a mental mindset when you are out there on the floor,” Coach Collins said. Collins recognizes that the health and safety of all staff and players should always be the #1 priority for any program. Coach Collins spoke highly about Ohio State acting coach, Jake Diebler who filled in for Head Coach Chris Holtmann due to health and safety Protocol.

The team remains hopeful that they can turn their season even with a 1-4 record in the conference. “The first thing to do is find a way to win one at a time; it will help build the team’s confidence and get them back on the right track. We have a good team; there’s a chance to turn things around because we have guys in the locker room that care. The team has now lost three in the row, two challenging games at home, and today we continue to fight until the end, even through adversity,” Collins added.

The Big Ten Conference is the oldest Division collegiate athletic conference in the U.S, and it is historic. “Investing in a new arena and practice facility not only adds to the commitment to a winning culture, but it helps the program get up to par with what we are competing against in our league,” Collins said. Collins added that the Big Ten is the best in the country, in his opinion. “You are still playing against terrific programs and trying to climb the ladder in a tough league.”

“We’ve had to hit the reset button as a team, but these groups of players like Pete Nance, Chase Audigy, Boo Buie, and Ty Berry, to name a few, means that we have something special here,’ Coach Collins said. Bringing in guys during the recruitment process to instill what that winning culture is all about is one way to start. Coaching in the conference requires having a tough-minded mentality, realizing that there will be tough times that you have to fight through adversity. Not capitalizing on close games during the last four tries is part of that tough hurdle that the team must find a way to overcome. On Jan. 12, 2021, the Wildcats will take on Maryland at home, and the game tips off at 8 pm.