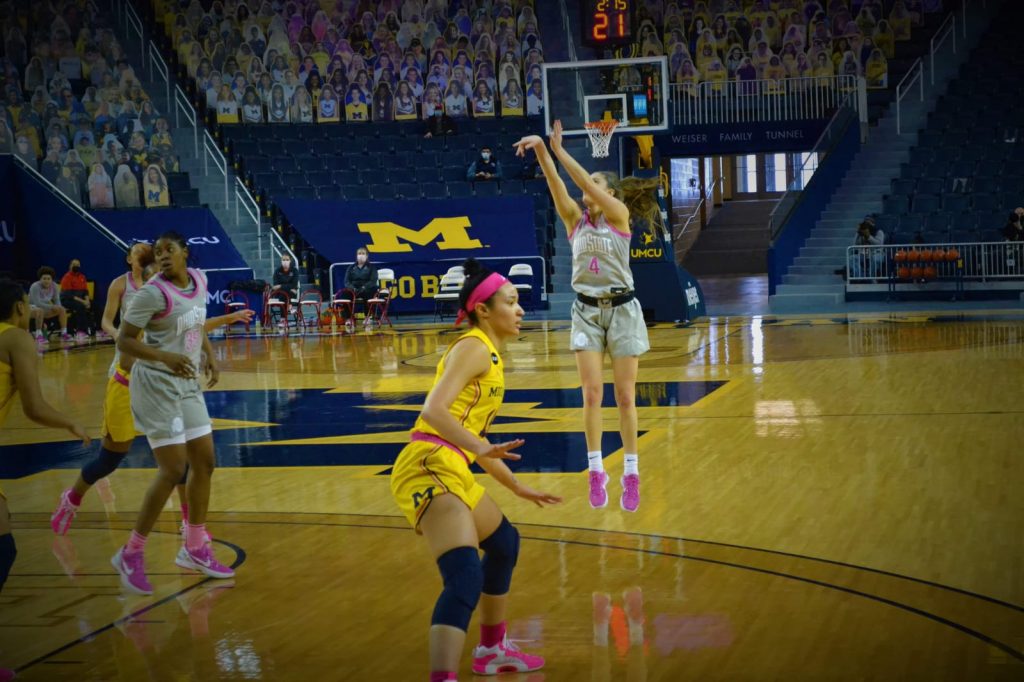 Though sophomore Jacy Sheldon made a career-high six three-pointers and helped spark a fourth-quarter rally, Ohio State couldn’t quite make up the gap in a 75-66 loss Sunday afternoon to No. 11 Michigan.

Both teams came in lukewarm. Winners of the last 3 of 5 Michigan had a high-powered offense with 6’2 forward Naz Hillmon at the center of it all. Ohio State was without starting point guard Madison Greene, but after a strong win on last Thursday, scoring in the triple digits against Purdue, Ohio State looked to roll a win. Unfortunately, that wasn’t the case in the game as the Buckeyes lost to the Wolverines 66-75.

The game was a defensive battle with both teams causing double-digit turnovers – Michigan 13 turnovers and Ohio State 17 turnovers.

Michigan, Naz Hillmon gave another amazing performance scoring 27 points and grabbing eight boards in the process. Ohio State Jacey Sheldon was 6-of-10 from long range, besting her previous career-high of four three-point makes in a game. She finished with 26 points, marking her eighth 20-point game of the season. Poole had a second consecutive strong game filling in for Madison Greene. She scored 14 points and dished out a game-high six assists.

The first half of the game was fairly tight as neither team led by more than six points, and the Wolverines led just 30-27 at the break. Despite the scrapy effort at the end, the third quarter deficit was too much to overcome for the Buckeyes.

Head Coach McGuff gave both Sheldon and Poole future hope in the Ohio State in a well-deserved praise after the loss during the post-game press conference interviews.

Ohio State remains on the road this week and will play at Penn State on Wednesday evening. Ohio State is keeping their hopes of winning alive to win out the regular-season conference title to salvage the season with the postseason ban looming.