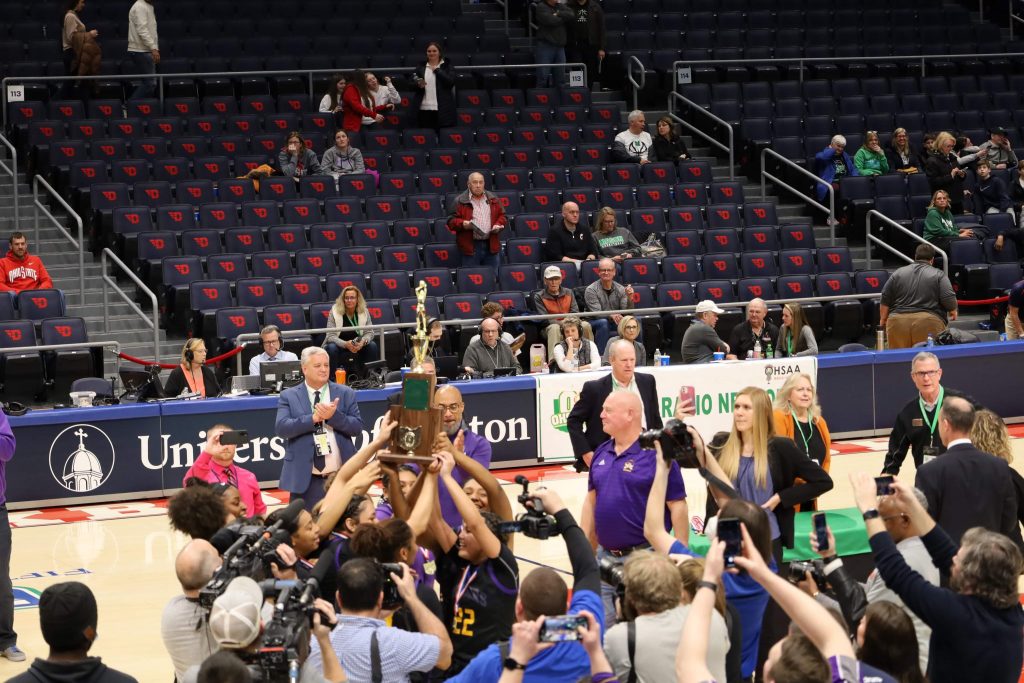 Reynoldsburg High School women basketball team made history winning, for the first time, the Ohio State Championship in a spectacular 63-58 victory over Manson High School at the University of Dayton Arena.

We watched David and Goliath of Girls Basketball between Reynoldsburg High Raiders, also known as the Burg and William Mason high Comets, also known as Mason. Mason had a lot of shooters, and calls were going their way, but in the end, Raiders would prevail 63-58 at the University of Dayton Arena, approximately one hour and twenty minutes from their campus.

The Raiders had a fight on their hands from the referees’ one-sided foul calls, their own emotions, and families’ emotions, but, one thing and two for sure, the girls never stopped believing in themselves!!!

The lady Raiders never stopped grinding!!! At the beginning of the third quarter, a switch clicked on for the Raiders, and you saw a new drive emerge. The hustle mentality took over, getting those second-chance shots, even being down ten at one point of the game. The effort I saw was “leave everything on the line for a chance of a dream that begins with YOU” The Raiders second half picked themselves up by the bootstraps dug in deep, believed in their 2000 pts (had to add) Leader Imarianah Russell.

Russell then took the helm fourth quarter with a fighting supporting cast headed up by Perry and Miller. They contained Freshman Mason Parrish jump shots by blocking second contested shots by the University of Miami commit 6’6 Senior Kyla Oldacre. Oldacre finished the game with 17 points 13 rebounds and was nearly unstoppable in the first half. The Raiders could not guard her, even putting two players on her numerous occasions. However, that effort by the Raiders coaching staff led to the foul issues, so the team had to rely on their outside shooting while still playing zone defense to keep themselves in the game.

The game went into OT with four minutes on the clock. The Raiders supporting cast walked back on the hardwood tired, with some bumps /bruises, but the determination in their eyes told a different story. No one expected them to win, but they EXPECTED to win, and that is just what they did. The Burg went on a 6-2 run in OT, and their zone defense carried them home.

And this was Mason Comets’ 4th time being a runner-up, lost in the semi-final once, but won it all in 2000. Reynoldsburg

Watching the electricity in the arena all night is a memorable moment I will cherish as a sports spectator and media outlet!!! These games only happen once in a blue moon to watch an upset of this magnitude. When the OT struck 0, the Lady Raiders became the first team in history to win a Girls State Basketball Title. After the game, the question we asked was, “What was the statement for this season?” The interview responses from the Raiders HC Purtell to Imarianah’s dad and Imarianah herself sentiments were. “Never give up; belief in your strengths, talents, and your teammates.”