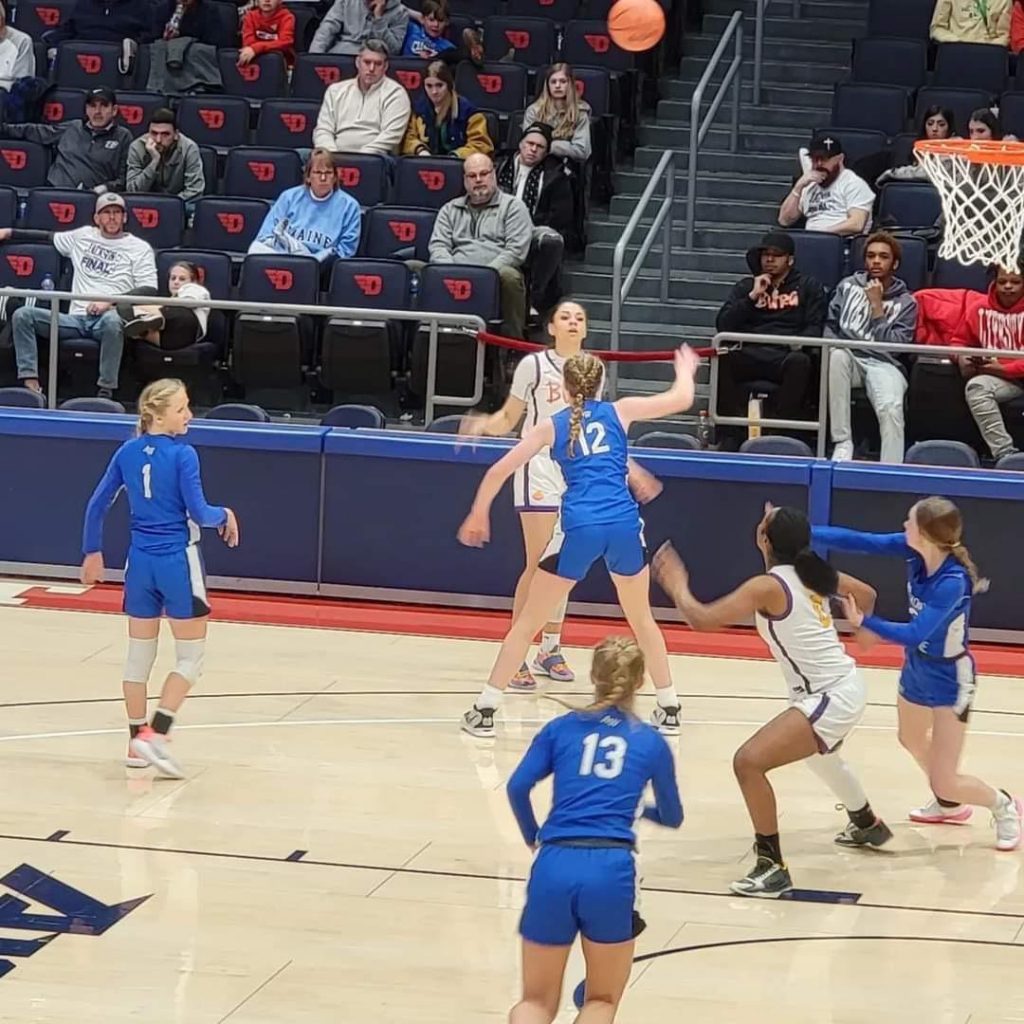 The game between Reynoldsburg high school girls basketball ball versus Anthony Wayne High was a battle of defenses with Reynoldsburg beating Wayne 67-48 to advance to the state title for the first time in school’s history. They will face Mason high school out of mason, Ohio.

Russell had some missed shots and had many jitters at the beginning of the game. Some of the referee’s calls were kind of judgmental, but they shook it off in the second quarter and went to work. Going into the half, they were up 22 points at one time.

Mya Perry committed to Ohio State, and her teammate Imarianah Russell finished with twenty points each. They advanced to the OHSAA Girls Basketball Division I state championship game against Mason, defeating Anthony Wayne Friday night 67-48 at the University of Dayton Arena. According to the Coach, he never had a one-two punch in his 20 years of coaching the team.

Fans started getting into it, cheering the Reynoldsburg Raiders on, which helped build the girl’s confidence. Making those critical plays when it matters the most was one of the reasons why they are moving on to their 1st state title in school history.

Overall, they did a great job, but they will have to play more challengingly because they’ll be playing a different team. Decision-making in the title game has to be better, especially on the perimeter and the line of scrimmage, because that Mason team has a 6.6 guard that’s Kyla Oldacre. Oldacre dropped twenty-one against Massillon and also grabbed nineteen rebounds in that game.

It will be a great game against Mason and the Reynoldsburg Raiders. It is two different play styles, but the Raiders have the advantage because they run the ball. The team does a lot of fast-breaking and full-court presses. The game against Anthony Wayne did a lot of half-court presses, but Mason has a 6-foot six-shooter along with a Freshman forward who is a beast on the board.

Cincinnati schools are different from Columbus schools, not to take anything away from Reynoldsburg because they deserve to be there in their Division.

The team is the number one seed, but it is not just a game because Mason also has the same record and plays with their heart on the floor.

Mason fans will be in full effect, but Central Ohio will also show up to support Reynoldsburg, who will be playing in their first state title game.

When that happens, that always gives the team a boost of confidence.

When Mason and Reynoldsburg take the game, it will be a battle of defense and rebounding because that’s the one thing that Mason did well playing against Massillon. Raiders must fight for those rebounds and second and third chances. Reynoldsburg has to do better, and the coach cannot let them sit back.

Reynoldsburg will have to go to the air with their shots, maybe a lot of three-point shots and a lot of perimeter shots because if not, Mason senior Kyla Oldacre will take over. Oldacre took over the third quarter and finished nineteen rebounds when Mason played Massillon.

For Massillon, going into the second half, a lot of it was because they have a 6-foot thick athlete playing. Then you have freshman Madison Parrish, who’s 5-10, and she’s the queen of pushing full-court press. Even though they are athletic, Mason does not run as much as Reynoldsburg does. Mason also plays that half-court press just like Reynoldsburg does; it will be an exciting game to watch. They also have a lot of fast break-ins, so expect great competition.

It’s going to be about who wants it more, and they’re fatigued. The game will be played again at 8:30 at night, so many factors will come in. Reynoldsburg will win, and it will be a very high-scoring game, but the team Reynoldsburg can pull it off. The score of the game will be in the 60s.

Reynoldsburg is 25-2, winner of sixteen straight, and Mason 27-2, winner of fourteen consecutive games, will occur at the University of Dayton Arena on March 12, 2022, at 8 p.m.