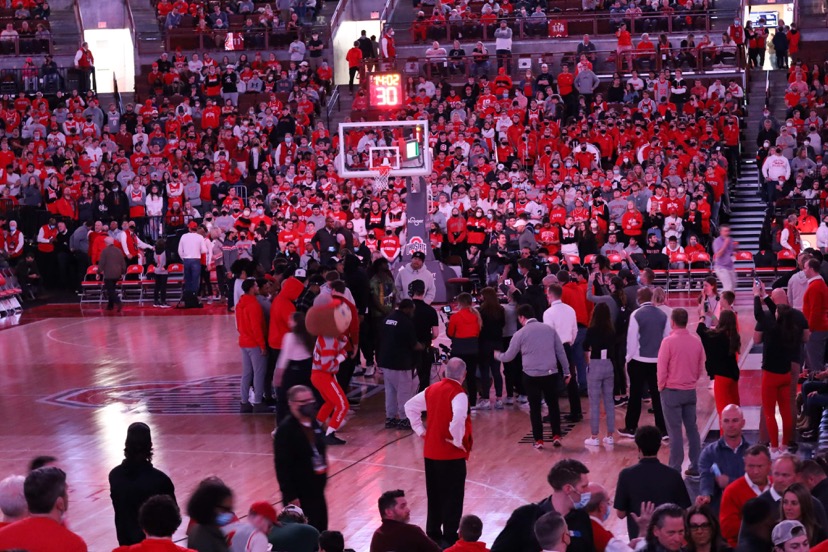 Graduate Student Center Joey Brunk, who averaged 1.3 points this season, made every minute count while on the court Thursday night against Michigan State, filling in for the injured Zed Keys and Kyle Young. His remarkable effort led to an 80-69 victory and could lead to more minutes when the Big Ten Men’s Basketball Tournament starts next week.

The 255 Center is originally from Indianapolis, Indiana, and each time he touched the ball, the crowds stood on their feet and demanded that he take the shoot. When the Buckeyes had possession of the ball, the crowds shouted for Brunk to get the ball. It is only one game, but after back-to-back losses to Maryland and Nebraska, Brunk’s energy was just what the Buckeyes were missing.

Ohio State Football players and coaching staff were on the court during the half-time game between Ohio State University Men’s Basketball vs. Michigan State Men’s Basketball. They received recognition for winning the 2022 Rose Bowl game against Utah 48-45, and the team introduced some of the new coaching staff, and Spring Practice starts for the football squad during the week of March 6.

A scary moment for the Buckeyes was when Liddell was unable to get up with 15:11 left to go in the game, and the crowds were holding their breath. Liddell, however, stood up with the help of his teammate and remained in the game without an injury. The team does not need more injuries under their belt since Sophomore Zed Key suffered an ankle injury in Sunday’s loss at Maryland. Also, the fifth-year senior Kyle Young left Nebraska game with a concussion, and the return date for both players is unknown.

Freshman sensation #22, Malaki Branham of the Buckeyes, continues his remarkable dominance on both ends of the court in the game against MSU. The crowd went wild when he dunked over an MSU defender with 3:53 left to go in the game. Branham would finish the game scoring 22 points, and the Buckeyes had four players score in double figures, which was one of the difference-markers.

Spartans Coach Izzo describes the game as being one of their worst defensive effort of the season. Ohio State’s turnover ratio led MSU to keep the game close, especially in the second quarter. But the reality is the team focused too much on Liddell and Branham and forgot that anyone on the Buckeyes Bench could step up at any given night. “I never thought in a million years that Buckeye’s Joey Brunk would go for 18 points after all of the injuries that he went through, and I recruited that kid,” Coach Izzo said.

“I don’t know that he surprised me with his ability to score because I’ve seen that for a couple of years, and I’ve seen it in practice. The reality is that we’ve had a little bit of depth there, so it’s forced him to the bench more than I would have liked, and I’m sure more than he would have liked. But it’s an unbelievable testament to the kid,” Buckeye’s Coach Chris Holtmann said.

The Buckeyes close out their regular season with a game against Michigan at home on Sunday, March 6, 2021, at 2:30 pm on Foxsports.