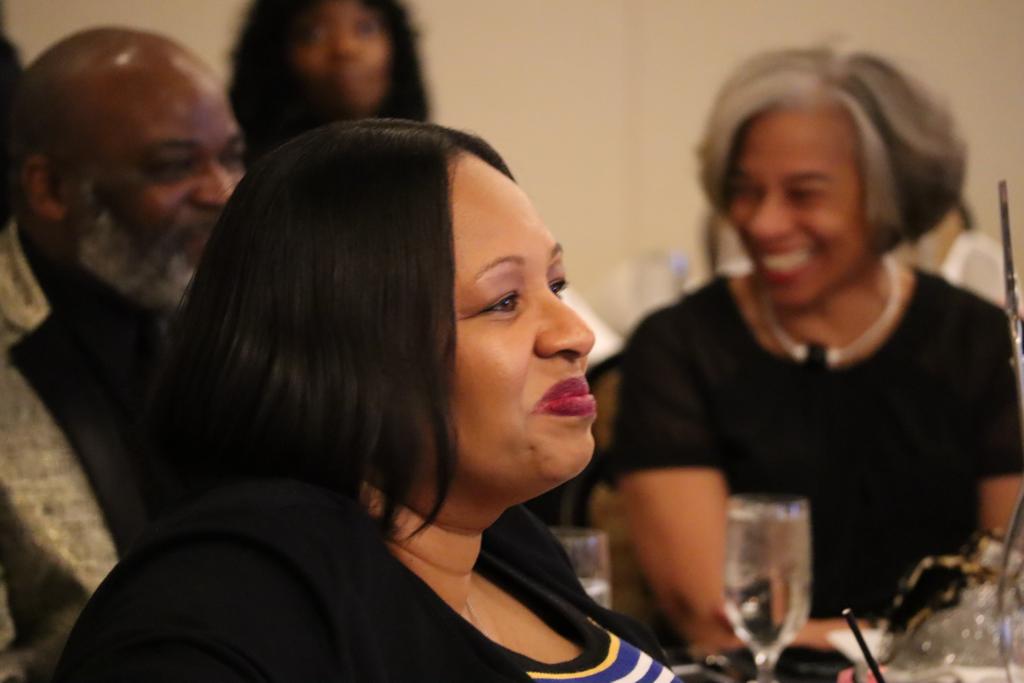 By Peaches Calhoun, with pictures by Ganel Leconte

Imagine a beautiful conference room filled with elegantly dressed adults and young adults alike. The tables have fresh white tablecloths, and a formal dinner is served. The atmosphere is filled with beautiful music, and everyone is awaiting a program where African American Leaders and Community mentors are being honored.

Sounds like a dream, right? It was no dream. And this was what happened on the night of February 18, 2022, at Central Ohio’s annual honors Fundraiser event. The theme of the night was “Honoring the Legacy.

The Honors night was presented by APJ/People Like Me Project, which recognizes the achievements of African Americans in Central Ohio and Miami Valley who make positive impact within their community.

Mrs. Gina M. Watts has served for nearly 10 years as a full-time instructor and Career Services Coordinator in the Student Success Center at Penn State Fayette, The Eberly Campus. Mrs. Watts currently serves as the Operations Manager of Vineyard Community Center at Vineyard Columbus. As she received her Honor in Religion, she stressed the great importance of answering the call to service.

Dr. Oluyinka O. Olutoye received the Health and Wellness achievement award. Dr. Oluyinka began his acceptance speech by having us all learn and say his name together. Dr. Oluyinka O. Olutoye is a trailblazer from Nigeria who has dared to be great. Dr. Oluyinka is best known for leading a team of 21 doctors to remove a sacrococcygeal teratoma successfully, a large tumor from a 23-week baby’s tailbone and place the baby back into the mother’s womb. The Surgery made global news.

Next up was the Honorable Judge Terri Jamison, who received the Lifetime Achievement award. Judge Jamison is a humble yet powerful judge who sits on the 10th district Court of Appeals bench in Franklin County. She describes herself as a “driven Individual,” and her positive impact on the community proves true.

Attorney Luke Fedlam was honored with the Legacy in business award for his efforts to serve athletes at every phase of their sports career. His resume spans nearly 20 years working with athletes; he leads Porter Wright’s Sports Law practice as a non-agent sports attorney.

Greg Jefferson was on the list of honorees to receive the Trailblazer award for his youth leadership in the community. Jefferson helped youth identify critical pathways to Education, opportunity, and success. Unfortunately, Jeff Passed away peacefully this year on January 7, 2022. His son Brandon Jefferson came forward to accept the award for his father on his behalf and shared with us his father’s character and his reasons for being inspired to build and serve in the community in his father’s Honor.

Dr. Talisa Dixon received the education award on this night. Dr. Dixon is in her third year as the Superintendent and Chief Executive Officer of Columbus City Schools. Following Dr. Dixon was the honorable Judge Lasheyl Stroud, who received the Justice recognition for her extraordinary work in our community.

Judge Stroud’s career experience includes working as a magistrate judge in Domestic Relations and Juvenile Court.  She shared with us her passion for youth and how, from a young age, she knew that she wanted to advocate for those who didn’t understand their rights and who felt their voice wasn’t necessary.

Yolanda Harris accepted her recognition in the area of Media Communication. Yolanda is known for her journalism and Youth involvement.

Tiffany Warren is a recognized force in the community regarding diversity and inclusion. She has more than 15 years of experience in Education and serves as an Administrator for Licking County Local Schools. She received recognition in Education from the APJ/People Like ME Project. And the last Honoree to receive the prestigious award was Tim Brown for his education and community service work.

After an emotional and inspirational night filled with encouragement and empowerment from the Honorees and hearing heartwarming Youth Testimonials, the attendees ended the inspiring night feeling a sense of renewed Community responsibility and a willingness to answer the call to serve. Seeing leaders of color who are actively making a difference showed the young adults that it is possible to achieve their dreams and uplift and make a difference in the lives of others on the path to fulfilling their life’s dreams.