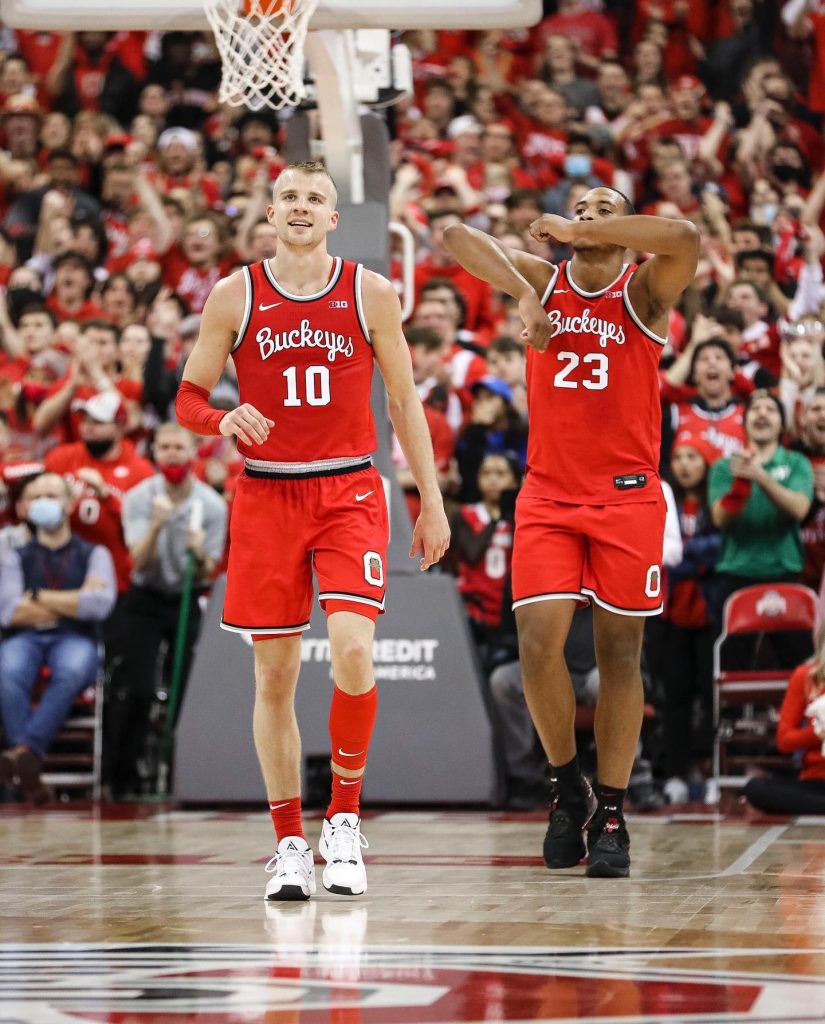 The Men’s Basketball Atlantic Coast Conference and Big Ten Challenge started in 1999, and to date, the ACC holds an advantage over the Big Ten 138-113. The Blue Devils are also the most dominant and successful team in either conference. They were 19-2 before losing a heartbreaking loss to Ohio State University at Schottenstein Center 71-66 on November 30, 2021.

With this win, the Buckeyes even the all-time series with Duke at four games apiece. Also, it is the men’s program’s 10th win against the Associated Press Number one team in the country. The loss also gave the Blue Devils their first of this season.

The Buckeyes now have a 9-11 record against the ACC and are on a two-game winning streak in the challenge. They have won five times at home and lost five times at home. On the road, they have won four times but lost five times. Ohio State has appeared in 10 Men’s NCAA Final Fours and won it all in 1960 under the leadership of star player, Jerry Lucas. Mr. Lucas was in the building last night sitting next to another Buckeyes great, Archie Griffin, two-time Heisman Trophy winner in 1974 & 1975.

When the announcer called both of their names, they stood up and everybody in the building started cheering and clapping because not only are they legends in their prospective sports but once a Buckeye, always a Buckeye.

“It is about taking it one position at a time and not thinking about or wondering what’s going on with the scoreboard. Focusing on winning every possession is a crucial element to how we did tonight,” Russell said.

To all of the players out there who may not be starters, Russell stated that it is always important to be ready when your number is up and showcase what you can do when that time does come.

We had to make stops on defense. We had to tighten up our “defense” and get “stops.” When we did that and ended up with the “W.”

It is always good to get a win, but there’s that reality that the next game is around the corner.  “We can’t keep our head in this game because we got a good Penn State team on Sunday. We can’t live in the past, so we must prepare for the future, but we are happy with the “W.”

It is an excellent win over an outstanding program, a hall of fame legendary coach, and a terrific team. Duke will have a great year, they are gifted, and they are “really” talented. Despite all the noise, our ability to remain calm and stay with it was critical, and players “win” games.

Our crowds were phenomenal, and I know the team coming into the building is the #1 team in the country. Of course, there will be an expectation, and it is a Legendary Coach and a potential lottery pick.

The Buckeyes went 11-22 from the free-throw line, and it could have been the difference-maker if they did not get a W. “There was a woman who sat in the front row, and one of the times that we missed a free throw, she lifted her hands and said, oh-my-God. Coach Holtman added,” I know, responding to the 11 missed points that could have been.”

“We didn’t play with great poise offensively in that stretch especially missing all of those easy shots, but the guys remained calm and poised when it matters the most.”

Duke University under Head Coach, Mike Krzyzewski, has appeared in 16 Men’s NCAA Final Four, was runner-up six times, and won it all five times, with 2015 being the most recent one. He is the most winning coach among active coaches. On June 2, 2021, he announced the 2021-2022 season would be his last after coaching the Duke Blue Devils for 41 years.

After the Tough Loss to the Buckeyes, Coach K shared his frustration with his players’ fooling situations throughout the game. “They are well-coached and well-balanced. We fooled so much, and it is the worst that we have fooled. We’ve been pretty good. Tonight, we had twenty-three fools, and part of that is not playing with the same speed that we usually have”, Coach K said.

What determines a good player is playing and maintaining your composure when you are having fool trouble. He credited his team for playing significantly well during the first half but stated that they could not make any defensive stops in the second.

Coach K on his star player, #5 Paolo Banchero, “He met some “really” good players tonight that challenged him a little bit, but we trust him, and he is not getting benched. It is a learning reminder that he will be playing much older guys with different skill sets. And it is also his eighth college game, so there’s always a lot to learn.”

Banchero finished the game with 14 points, went 5-6 from the free-throw line, but only shot 4-14 from the field.

“The Buckeyes have a lot of guys that you did not expect to score that could give you a lot of points. One night could be Lidell, and the other could be Zed Key of OSU. They also had many guys that we had to look at the sky before they had good shooters at the base can pass out to, indeed,” Wendell Moore, Jr of Duke (Junior Forward) said.

Storming of the field:

I hope the students enjoyed it well into the morning, safely, but well into the morning. It was great to see our players enjoying the win, especially after a tough loss to a good Florida team,” Coach Holtman said. The way the crowds show up tonight, the coach added that he hopes to see that kind of energy from the fans because it will be a different marker for us.