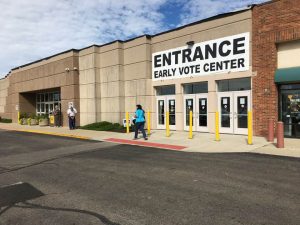 Meanwhile, the Franklin County Board of Elections has presented the Champions of Democracy Special Recognition Award to Nationwide’s Grassroots Manager, Carol A. Phillips.

This award is to recognize Phillips for always going above and beyond in her work through Nationwide with the Franklin County Board of Elections Champions of Democracy program.

The award is given for dedication and leadership in working with the Franklin County Board of Elections to further the goals of recruiting the best Precinct Election Officials through the Champions of Democracy Program.

Nationally recognized, the Champions of Democracy program works with local employers and organizations here in Franklin County to assist with recruiting and training excellent Precinct Election Officials, who are more commonly known as election “poll workers.”

We also work with Franklin County Government as well as the City of Columbus to provide onsite poll worker training for their employees.

“Carol Phillips has been truly exemplified how a strong partnership between the public and private sectors should work,” said Franklin County Board of Elections Director Ed Leonard.

“Her dedication to maintaining excellence exemplifies what we here at the Board strive to achieve in each and every election. It is representative of the work and dedication we have seen from our COD participants, but especially from Nationwide Insurance.” 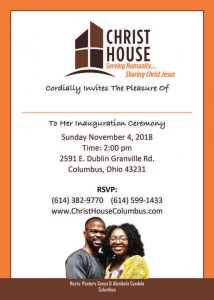 As part of its inaugural ceremony, Christ House will hold a “Cross-Cultural Ministers Breakfast Meeting” on Saturday, November 3, 2018 at 2591 E Dublin Granville Road, Columbus, Ohio beginning at 10am.

A statement by the host pastor, Sanya Oyedola said that, “some of the topics to be treated include proliferation of churches – is it healthy or not; what are the right protocols for releasing protégés; and other questions about ministry and ministering.”

The church will hold its inaugural service on Sunday, November 4, at 2pm. 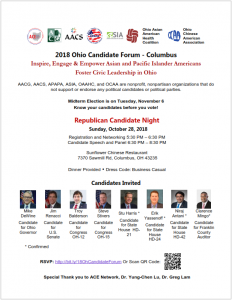 The Asian and Pacific Islander Americans in Columbus, Ohio will hold the second version of the 2018 Ohio Candidates Forum (Republican) on Sunday, October 28, at the Sunflower Chinese Restaurant, 7370 Sawmill Road, Columbus, Ohio beginning at 5.30pm.

The first version of the candidate forum (Democrat) was held on Wednesday, October 17, 2018.