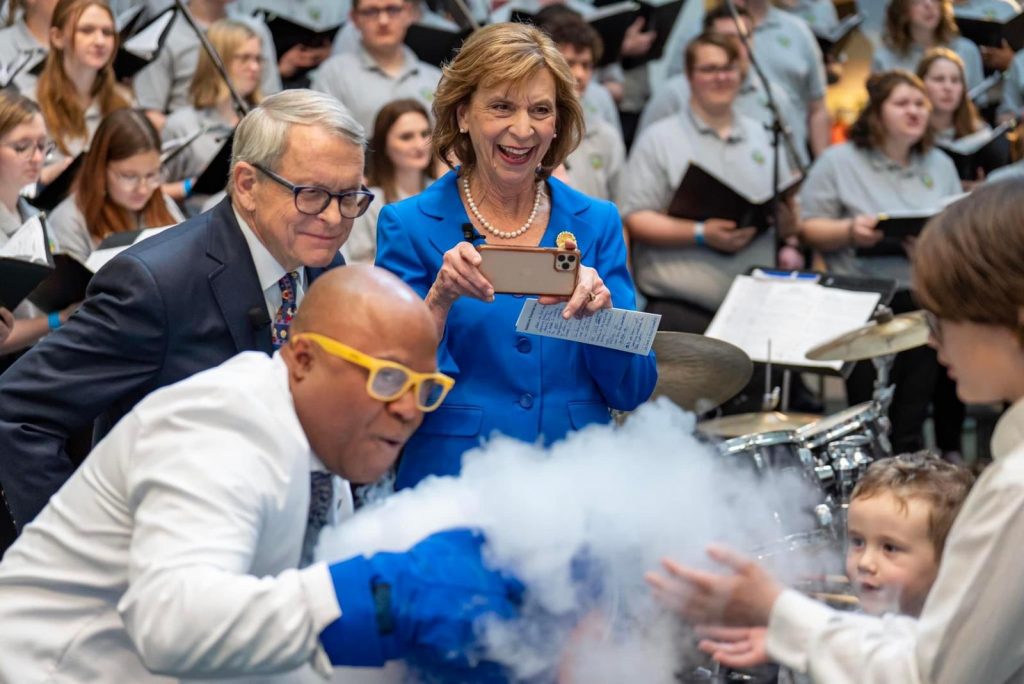 Ohio Governor Mike DeWine and Lieutenant Governor Jon Husted’s second Inaugural Celebration focused on faith, family, and friends. It was an extra four-day extravaganza, which started on Friday, January 6, 2023, and concluded on Monday, January 9, 2023, when both executives were sworn in before state lawmakers from both parties and invited members of the public.

Four days before his inaugural speech, DeWine, the 70th Governor of Ohio, turned 76 and reminded us that he will always tell people that Ohio is a place to live, whether he’s speaking privately or in public.

“When your son graduates from Law School, you are happy for him; when he thrives in his career, you are even more optimistic. And when you support him in his bid for elected office, you become one of his biggest supporters, and when he becomes the one doing your oath of office, it’s a hug afterward that you wish never ends,” said Governor Mike DeWine while acknowledging the role played by Ohio Supreme Court Justice and son, Justice Pat DeWine. In public and private ceremonies, the Governor’s son, Justice Pat DeWine, administered the Oath of Office.

In their second terms, both Executives promise to make Ohio an even more welcoming state to high-tech companies, which would ultimately create jobs. Saturday was the Governor’s Inaugural Gala, which took place at the Ohio Statehouse.

“The children and their parents had a wonderful afternoon at COSI because discovering something new is always an exciting and beautiful experience,” said Don Roberts, a volunteer at the inaugural.

On Friday, Lt. Governor Jon Husted hosted a Celebration of Ohio’s Future Leaders and Innovators held at the Columbus Crew’s Stadium. Inside the Stadium, Friends, families, colleagues, and distinguished guests packed the Huntington Field Club to highlight some of the Governor’s and Lieutenant Governor’s accomplishments in the manufacturing and energy sector.

“Ohio is the greatest place to be because one can start a business, get a quality education, find an affordable place to live, to have a wonderful life. That’s what Ohio is all about, and we will distinguish it over the coming years as the place”, LT Husted said.

In addition, Lieutenant Husted said Columbus is becoming one of the fastest-growing job creation areas in the Midwest, especially with the incoming Intel, Honda’s expansion in Marysville, and other manufacturing companies that will soon call Central Ohio home.

During the Governor’s opening inauguration speech, First Lady Fran received a standing ovation for her commitment to providing children and families with resources to succeed.

“Four years ago, in my first inaugural speech, I said we would invest in people. I ask the people of Ohio and this general assembly to do things where the results will take time. But where they will be profound, and where they would endure,” DeWine.

Everybody always expects a change to happen overnight; however, the Governor urges everybody that” what we are fighting toward, we may not see the final result in this Administration, or it may happen after we are long gone, but to act, nonetheless. The general assembly and Ohioan did just that,” he said.

Governor DeWine stated in his inaugural speech that Ohio is opening its doors to an array of opportunities that would keep Ohioans in the State and even attract new ones. In addition, having companies such as Facebook, Amazon, and Intel opening data centers, warehouses, and processing centers continue to put the State on the map, and that is why the Governor urged more people to consider coming to Ohio because “we have top-notch schools, high paying jobs, beautiful Metro and State Parks,” DeWine said.

Ohio was one of the States that welcomed Ukrainian refugees, and the Governor stated that all they wanted was Freedom from Oppression, building a better life, and safety from War. Central Ohio does have a significant immigrant population, and many have gone on to achieve greatness in multiple areas.

Within the past four years, DeWine reminded those of the General Assembly that “working towards improving access to quality childcare and promoting positive adult role models and mentors for the children remains a necessity. Increasing collaboration between local, State, and federal agencies to address Mental Health is another area in which the Administration hopes to work more closely.”

In response to Governor’s Inaugural, Democrat Minority Leader, State Representative Alisson Russo, stated that her party is looking forward to working with Governor DeWine on areas or issues in which they disagree and want to see an improvement.

“We live in a society where everybody should have an opportunity, especially seeing things change for the better for working families and the justice system.” The Democrats are not afraid to push back on legislation that does not have the best interest of all Americans”, Rep Russo said.

The DeWine and Husted Inauguration celebration kicked things off on Friday, Jan 6, at the Columbus Crew’s Lower. Com Field Stadium. Numerous Businesses leaders highlight past and present accomplishments in the engineering sector, especially manufacturing and technology.

“No one will think of any other place in the Midwest but Ohio when such conversations come up, and he points to the crowds and says all of you are part of the reason,” Lt Governor Husted said.

Lieutenant Governor Jon Husted reminded the attendees that building a sustainable future for all depends on building a solid faith, building strong families, and having friends who aren’t afraid to tell you when it’s time to make a change. His two children adopted parents and beloved wife stood beside him during his speech. Husted stated that his middle Child was at the basketball tournament, explaining why she was absent.

He thanked his adoptive parents for taking him in as a child and imparting a spirit of growth, hard work, dedication, and the desire to serve others.

As the first Somalia Men and Women elected to any office in Ohio, Ismail Mohamed and Munira Abdullahi held a community engagement and celebration. Other legislators throughout the State held private ceremonies as well to celebrate their confirmation.

As the inaugural ceremony wound down, the New Americans Magazine spoke with Don Roberts, a republican strategist & former judicial candidate, about what lies ahead.

A small reception was also held by Ohio Auditor of State Keith Faber around the corner from the State House with friends and families. “The Auditor was also sworn into office on Monday to continue keeping public offices transparent and appropriate in their fiscal duties,” Don Roberts said.

“Monday was a fantastic finale to Governor Mike DeWine and Ohio Lt. Governor Jon Husted’s Inauguration celebration events, concluding with the public oath of office at the Ohio Statehouse.

“My son Brandon and I stood to witness the promise of four more years of Republican governance and the promise of continued prosperity for Ohio,” Roberts said.