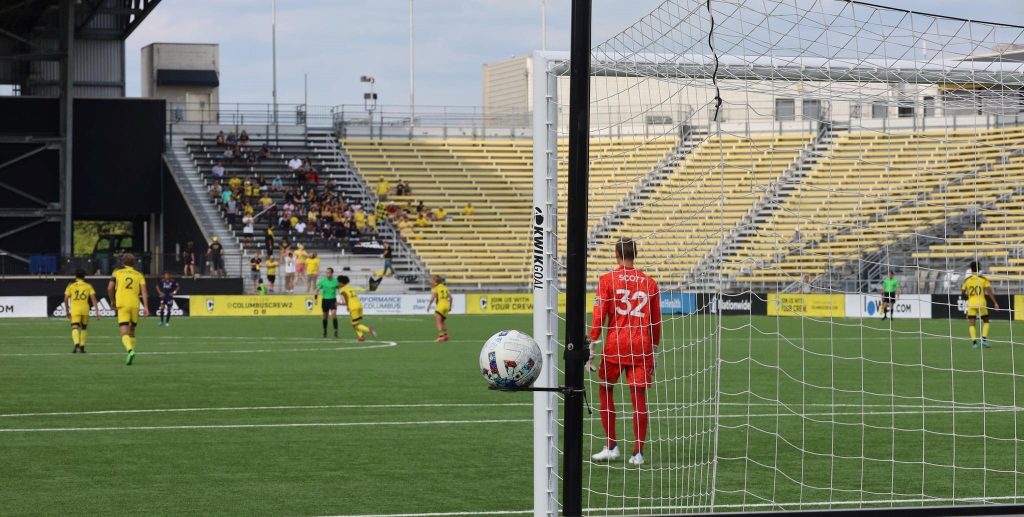 Throughout the season, Columbus Crew II team has been one of the best teams in the league. It is a testimony that success could find itself in Columbus Crew II’s corner with different pieces surrounding them. The team will start its drive to hold the first-ever MLS Next Cup when the playoffs Saturday, September 24, at 3 pm at Historic Crew Stadium in Columbus.

Soccer is a team sport, so we must give the Crew II organization credit and high fives for bringing different pieces together to make this inaugural season one to remember. They finished the season with fifty-five points, winning sixteen games, only three losses, and drawing five.

On Sunday, September 19, 2022, the Crew II had nine goals against FC Cincinnati II at the Historic Crew Stadium in their last regular season match. Three goals came in the first half and six in the second half. Yes, you read that right! It was a dominant performance by the coaching staff and its players, specifically Jacen Russell-Rowe.

Russell-Rowe is this year’s MLS Next Golden Boot winner after leading the league with twenty-one in total scores. He is a Toronto native and signed a contract to play for the team on March 18. He also appeared in five MLS games this season for Columbus Crew, splitting his time with Crew II, and it was the most goals they have scored this season.

Unfortunately, FC Cincinnati sits last in the Eastern Conference and will miss the playoffs. FC Cincinnati II did win the last match against Crew II on August 14, 2022, on a 4-2 penalty kick. So, Sunday’s rematch was revenge for Crew II, but no one expected it to be a blow-out game. At 19:35 in the first half, FC started playing with Ten Men after one of its star players received a Red Card after a brutal hit against a Crew II player.

Statistically speaking, Crew II dominated most categories, but the two that stood out were the 27 attempts and 11 shots on goal. They were defending and scoring from all corners. The first goal came at 27:37 minute by N. Fuson and assisted by J. Morris.

The league’s top scorer, Jason Russell-Rowe, led the way with four goals, bringing his total to twenty-one for the season. Out of the twenty-one MLS Pro Next league teams, the club leads with the most goals at 62, most assists with 49, and most goals inside 18 with 56.

A lot has changed since the team played their next opponent, Rochester, because they dominated the Crew in the May 29 match, scoring 4-0. “We grew as a team, especially overcoming injuries, and fought our way back, which is why we have been thriving since then. Securing home-field advantage throughout the playoff will allow the city and the fans to come to the game and support us, and we want that revenge against Rochester,” a crew player said.

Major League Soccer Next Pro (Minor League) cup will have the Western and Eastern Conference winners play one another in the alone match to determine who will take the crown after a spectacular inaugural season.