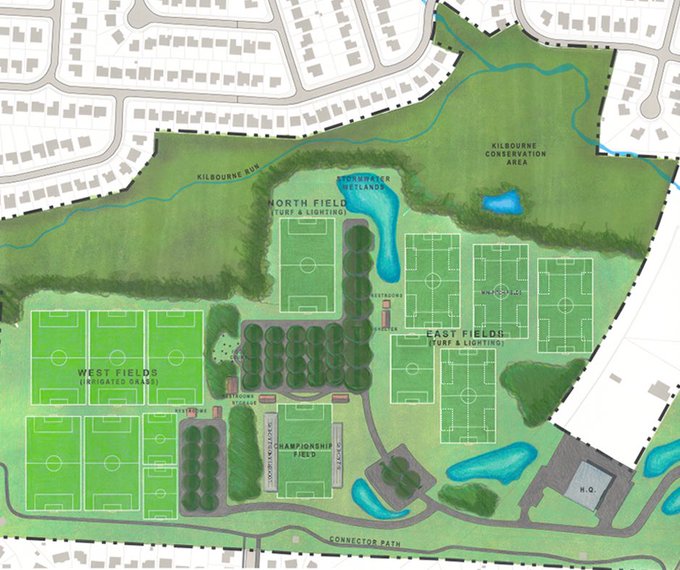 Columbus City Mayor Andrew J. Ginther has announced that the Community Sports Park promised as part of the city’s commitment to keep the Columbus Crew Soccer Club in Columbus will be located at Kilbourne Run in Northeast Columbus.

The 69-acre site on Kilbourne Run Sports Park (Shelter House) 4625 Westerville Road, Columbus, Ohio will feature natural and synthetic turf fields, mini-pitches and a championship field with spectator stands, a locker room and lights, and co-branding with the Columbus Crew.

“When we announced our support for the Columbus Crew, we were committed not only to soccer but to affordable housing around the new Downtown stadium, infrastructure in the Arena District to bring in new jobs, historic minority investment in the building of the stadium, assurance that Historic Crew Stadium did not become an abandoned facility in the middle of our neighborhoods, and a community sports park that would serve as a destination for youth and adult sports,” said Mayor Ginther.

“We have delivered on every aspect, except the sports park, and I am excited that today we are able to advance this component that is so important to our residents.”

Original plans called for the sports park to be located on fairground property near Historic Crew Stadium. The City has worked in earnest to secure a lease to the site, but the Ohio Expositions Commission refused to grant a lease.

“While we leave the door open for negotiations with the state and remain prepared to invest in recreation facilities on the fairgrounds site, the community has waited long enough,” said Mayor Ginther.

The City of Columbus already owns and maintains Kilbourne Run, a soccer-specific facility, and will be investing millions of dollars to enhance it. In partnership with the Crew, who will use some of the fields for their Crew Academy, it will deliver fields and facilities that will increase access to soccer and other field sports for Columbus kids, and position Columbus as a destination for regional tournaments – far more than what could have been accomplished at the fairgrounds.

“At the Crew, we want to introduce the global sport of soccer to as many young people in the city as we can,” said Kristen Bernert, Columbus Crew President of Business Operations.

“As we work to impactfully connect with the Columbus community, we want students to engage in physical activity in addition to their academic endeavors, to truly stay in the game. We take great pleasure in knowing that they, along with other residents of our community, will benefit from having an area to gather at the Community Sports Park and at our mini pitches throughout Central Ohio. We are excited about the City’s plans and we look forward to connecting more deeply with Columbus Recreation and Parks on programming here to bring the physical space to life.”