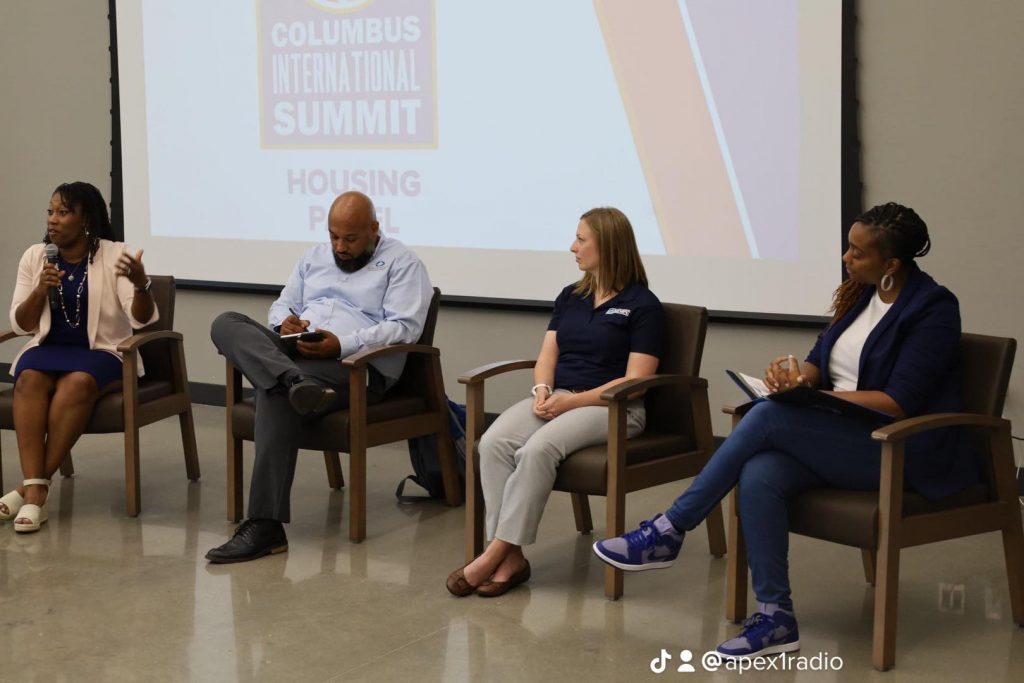 The city of Columbus hosted its first-ever Columbus International Summit to inform the new American residents about jobs, business opportunities, and other resources available when they arrive in Central Ohio or receive their U.S. citizenship.

“Our primary mission is to open up a dialogue with city leaders, the immigrant, and refugee community to let them know that the city leaders are open to sharing available resources to help them prosper in their new home. Moreover, a person must know all the resources available to navigate the opportunities available after becoming a citizen,” Harrison Poku said.

Poku is a Ghanaian American who is a legislative advisor in the office of the division of community engagement for the city of Columbus and was the MC of the event. He’s also highly involved in the upcoming Columbus African Festival, which will be on August 20, 2022.

“Our goal is to provide the community with better resources when it comes to housing,” Favor said.

In the Education panel, Councilmember Elizabeth Brown (President Pro Tempore) was the moderator providing information on educational resources available for those who are already in school and want to return.

“That’s why the Division of Community Engagement and the Department of neighborhoods, under the leadership of Mayor Andrew Ginther, and the city of Columbus wanted to be more present to make that possible,” Poku said.

Many new American candidates are running for public office in 2022. So, part of the Columbus International Summit was to provide information about elections, voting, and introducing candidates and many public servants to the new American residents since they are now part of Columbus’ brightest futures.

“Representation is everything, so we’re excited that we live in a city where immigrants have the courage or the confidence to run for a legislative seat or a public office. City officials support anyone working toward making a difference in their neighborhood, and we are excited to see what they have in store for us,” Poku said.

Poku also emphasizes that learning about the New American community requires an individual to be open-minded because we are not all from the same tribes or regions. “There’s a difference between a migrant, refugee, and immigrant. That’s why diverting resources to everybody, not just one specific group, ensures that all communities have equal resources available to succeed,” Poku said.

Although the Columbus International Summit is the first of its kind, the organizers look forward to partnering with more organizations in Columbus and Central Ohio soon.

The housing crisis is forcing too many retired seniors to return to work. It is also making things difficult for new graduates to be able to afford a place after just starting their careers.

“Our goal is to educate the community on what we are facing with this housing crisis and, more specifically, what the affording turmoil looks like and who it impacts,” Favor said.

Also, Per Favor, an organization such as the Legal Aid Society of Columbus, is an excellent resource to assist anyone facing evictions or landlord issues.

“There are ways to escrow your rent; you don’t want to give any additional reason for a property manager to file a judgment against you, especially if you have been paying your rent on time.” So, the Legal Aid Society of Columbus can help you with those translation services and provide solid legal advice for your next steps.

“The housing crisis proportionately affects low-income and communities of color, so our mission is to ensure that our residents have the education and the resources needed to navigate this tumultuous time in our city is a high priority for me,” Favor said

Those new American community members who are facing difficulty securing a home because of prior eviction records can seek legal advice, and the court has translators in the courts that can assist. Councilmember Favor said that we are working with several immigrants and refugee organizations like Community Refugee and Immigration Services (CRIS) so that it does not get to that point.

“Having a few immigrate, speakers, especially those who have faced similar discrimination in housing and employment, is critical for future Columbus International Summit,” a CRIS representative said.

“It is one of the areas in our housing committee that we need additional improvement, ensuring that if there’s a language barrier preventing an individual from securing a place or having a landlord issue,” Favor said. “We must ensure we have interpreters to assist people in the most challenging times.”

“I love to see the community come together with a common purpose. Community leaders working with city officials to address the immigration and housing crisis was a highlight for me. I look forward to seeing the Columbus International Summit’s growth and the impact it would have in the future for everybody, specifically the new American communities,” a community member who attended the summit said.

Apart from attending panel discussions, attendees also had the opportunity to speak with representatives from multiple organizations throughout the city.

A Central Ohio Transit Authority (COTA) and Linkus representative were also available to help participants navigate how to get around the city for personal and business reasons.

As part of the Health Panel, representatives from Columbus Public Health, Equitas Health will, OhioHealth, and Nationwide Children’s Hospital offered the participants information about health screening and other resourceful information.

Organizations such as the Office of Diversity and Inclusion of the city, the Columbus Metropolitan Library, the Legal Aid Society, Mid-Ohio Food Collective, Catholic Social Services, and the Somali American Chamber of Commerce were also in attendance.

As the City of Columbus continues to educate, provide resources, and be a voice for the New Americans in Central Ohio, including having representatives from two pioneering refugee resettlement organizations, the US Together and Community Refugee and Immigration Services, made the Columbus International Summit a success. Because of their efforts, Columbus has become more welcoming.