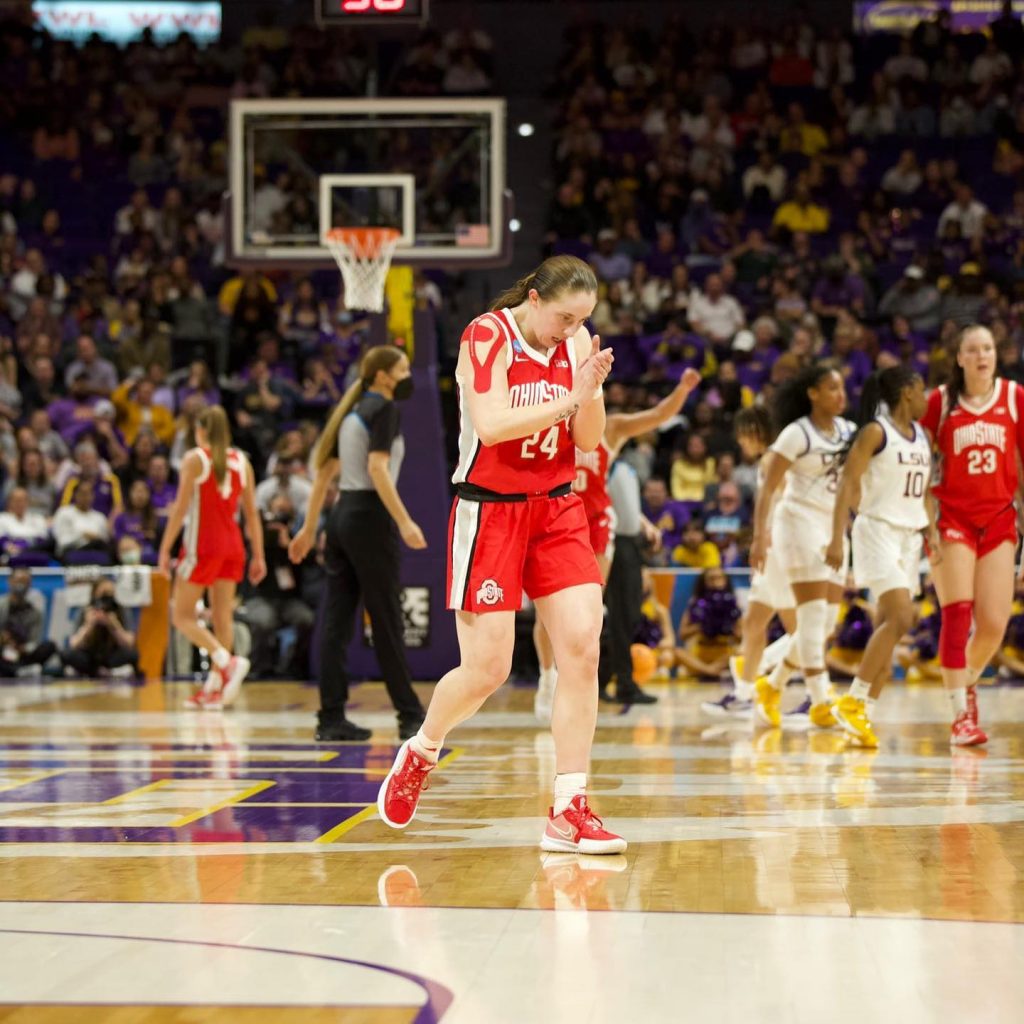 What did I say earlier? If Jacy Sheldon put up that many points, they would win. Sheldon had 23 points for the Ohio State Buckeyes, and Pointers of LSU added 32 points despite the loss falling 79-64. It was a battle from start to finish, but the difference-marker was that the Buckeyes went 10-22 from the three-point line shooting 45.5%, while LSU went 2-8.

The Buckeye’s determination to win shows, and it was extraordinary to see how the team gathered around each other to make the win possible. The gang leader was Sheldon, and if she stepped up, other players would contribute, which was huge considering they played in the Spokane region. Sheldon played the entire forty minutes of the game, had 23 points going 9 out of 17 from the court, added eight assists, and was perfect from the free-throw line 3-3.

They put up 22 points in the fourth quarter while LSU had 27.

LSU failed because OSU went up first quarter 15 to 8, then it was even out going into the half 19-18. OSU took over the lead by putting up 23 points while LSU had 11 in the third quarter, and that came from putting up that full-court press. LSU also struggled against Jackson State when it came to the full-court press, which is why Jackson State led part of the game.

OSU shot 28 out of 58 while LSU had 25 out of 68 shots, so their goal percentage was 48% to 36.8%. The team also added ten three-pointers, and LSU went 2-8, one of the difference-makers. When Jackson State played LSU, Jackson State’s difference-maker was how effective they were shooting threes going into the fourth quarter.

LSU Coach Kim Mulkey turned to her assistant coach and said, “When did Jackson state start shooting threes? LSU struggling to defend the three-point line cost them the game. “If you are having difficulty in one area, especially during the NCAA tournament, you ought to find another alternative to make a bucket,” Villanova Men’s head coach told Sportzkel Media after defeating the Ohio State Men’s Basketball in Pittsburg in the second round. LSU failed to do, not scoring inside the paint, and protecting the three-point line, especially for a team like OSU, which shoots over 45%.

“I’m happy for LSU; I can only imagine what those kids felt like the last two or three years with nobody in the stands and losing those close games. In addition to preparing for a new coaching staff, you preach to them how good things will come to those who wait, and how good things can happen for those who work hard and those five seniors to do what they did, I had to remind them in that locker room of the progress each of them made to get to where they are now.”

Mulkey also told her players that “You got as high as six in the top 25 during the regular season; you had a chance to host regional games; you are on a national scale and viewed as one of the top 16 seeds in the country”.

“Players did not want to disappoint the fans. What an unbelievable atmosphere because it was so loud and electric at the Pete Maravich Assembly Center (Home of the Men’s/Women’s Basketball team),” Coach Mulkey also added.

“Playing at LSU homecourt is probably the loudest one we’ve been in all year, but remaining competitive, especially this time of the year, was our focus,” OSU Senior guard Taylor Mikesell said. OSU trading the baskets back-to-back and staying with LSU runs was a difference-marker in managing the crowds.

Turning over the ball twenty times is one of the adjustments that the team must work on but shooting around 45.5% from the three-point line will be critical when they take on Texas in the Sweet 16 on Friday in Spokane, Washington.

“I am proud of how we came out and finished, too,” OSU Junior Guard Jacy Sheldon said. OSU senior guard Taylor Mikesell finished with 18 points, shooting 7-15 from the court, 4-7 from the three-point line, and led the team with a three-point shooting percentage. “Every one of my teammates, from the bench to the core, did a great job staying composed even when LSU was going on runs,” Mikesell added.

Coach Mcguff thanks NCAA for putting on a good show and working so hard to make the Baton Rouge regional possible.

“To the Baton Rouge community, what a great environment it was tonight, and it was fun to play in but challenging because it was so loud. We had to adjust how we called plays because the crowds were noisy, and the fans were so into the game,” Coach McGuff said.

McGuff also added that the LSU fans have a winner in LSU’s Coach Kim Mulkey and as the program progress, it will be a hard place for an opponent to win.