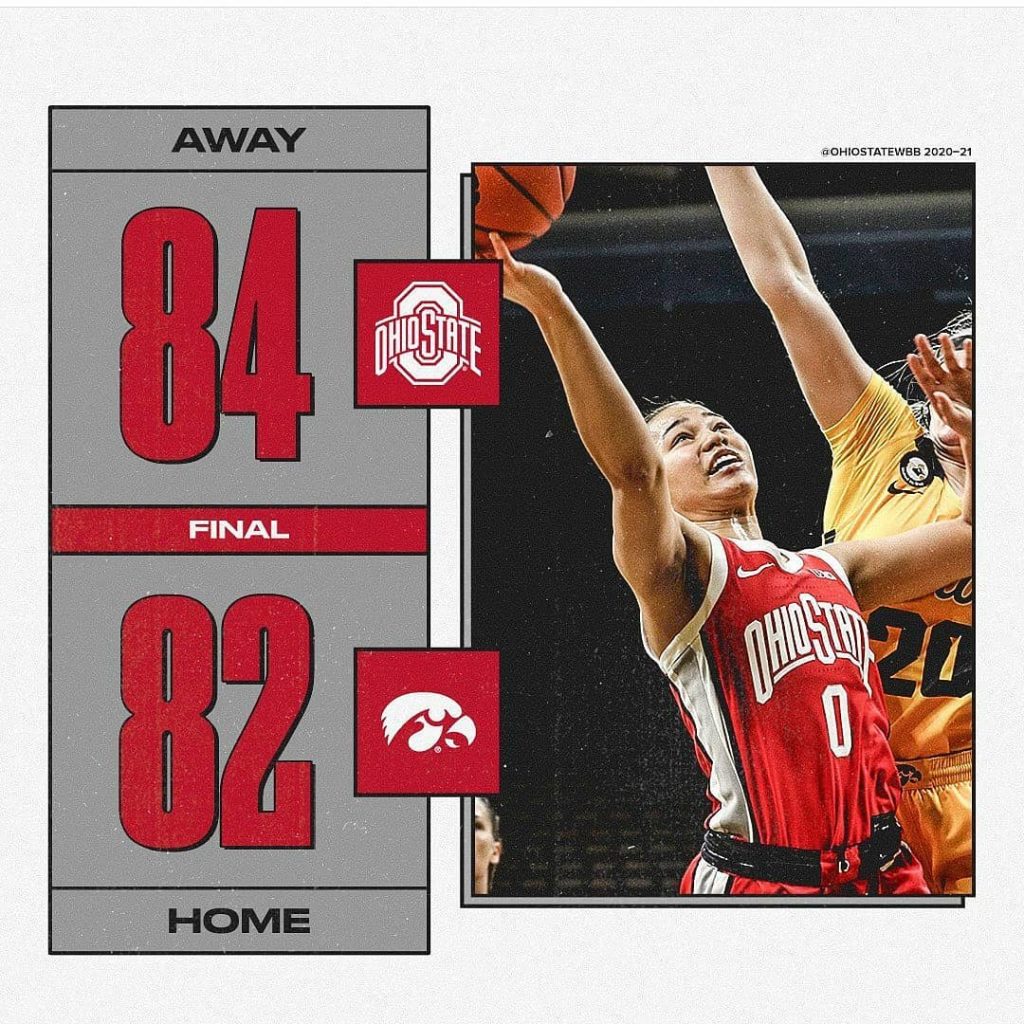 Number 15 Ohio State had trailed for all of 29 seconds in their first six victories of the season. But Wednesday in Iowa City was a different story, as the Buckeyes had to fight and claw their way out of a 14-point hole and eventually came away with an 84-82 overtime victory.

It was a true team effort as all nine Buckeyes who played scored at least two points and contributed somehow. Sophomore Madison Green led the team down the stretch as she scored 16 of her team-high 20 points in the second half.

Fellow sophomore Jacy Sheldon and senior Braxtin Miller each shot 7-of-15 from the floor and finished with 18 points apiece. Miller had two big buckets in the overtime period.

Forward Aaliyah Patty was the fourth Buckeye in double figures with 12 points and nine rebounds. Freshman Gabby Hutcherson finished with just five points, but her three-pointer with 1:29 to play in regulation gave the Buckeyes their first lead of the second half.

Iowa’s Caitlin Clark entered the afternoon averaging over 25 points per game. She scored 13 points in the opening quarter, but the Buckeyes did a good job slowing her down after that. She scored just 14 points the rest of the way to finish with 27.

The Hawkeyes made seven first-half three-pointers to build a 44-32 halftime lead. Iowa made the first bucket of the second half to extend the lead to 14 points, and it took the rest of the second half for the Buckeyes to finally close the gap. An Iowa free-throw with 54 seconds left evened the game, and the teams would trade misses in the final 20 seconds.

Sheldon’s jumper with 1:23 to play in over time gave OSU a two-point lead, and the Buckeyes lead 84-82 with:19 seconds to go. Iowa’s final shot for three didn’t fall, and the Buckeyes had just its second win in Iowa City since 2008.

Ohio State remains on the road this Saturday as they travel to Nebraska for a 5 p.m. (Tonya Kelly, MEd is an Educator, founder of Empower Our Youth Foundation, and owner of Sportzkelz Diva. For more information, visit http://www.sportzkelz17.com/).