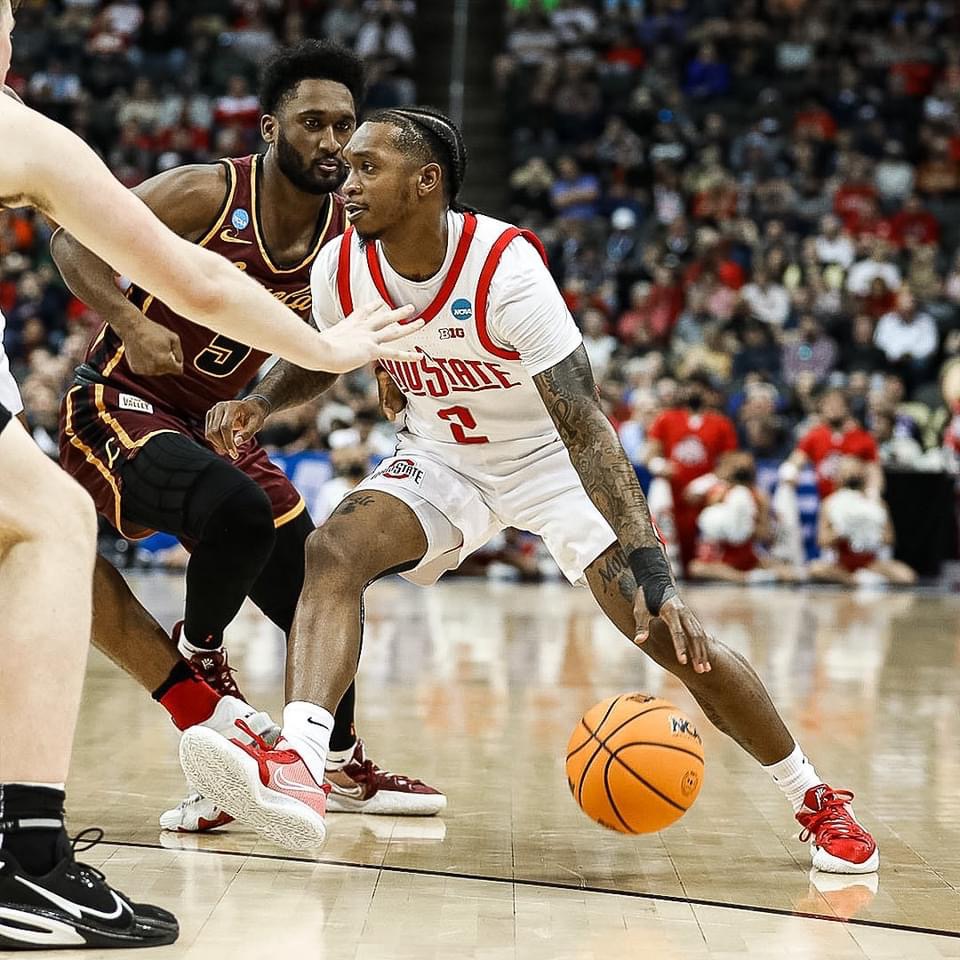 By Okon Ekpenyong, with Sportzkelz Media
After suffering a concussion in the Buckeyes’ loss to Nebraska on Mar. 1, 2022, Kyle Young scored nine points in the first round of the 2022 NCAA Men’s Basketball Tournament at the PPG Paints Arena in Pittsburg, PA. And this is Young’s first game since returning from concussion protocol, and he helped Ohio State defeat Loyola Chicago 54-41 in the tournament.

“I was able to get through all of the protocol, and I’m feeling good in addition to the doctors clearing me, and getting back into the swing of things in terms of conditions was a “tough” process, but it feels incredible to be back out there on the floor with my teammates,” Kyle Young said.

Another Buckeye, Zed Keys, also returned from an ankle injury after injuring it in a game against Maryland on Feb. 27, 2022. Though not at 100%, both players had the time to rest before returning to tournament play to give the Buckeyes a much-needed boost. With this win, the Buckeyes returned to the second round after exiting last year’s first-round while ranked #2 in the region.

The team leading scorer, E.J Liddell, finished the game with 16 points and ten rebounds, while Big Ten Conference Freshman of the year Malaki Branham added 14 points with five rebounds to help the Buckeyes advance to round 32.

Since Jerry Lucas’s collegiate career at Ohio State in the 1960s, the Buckeyes have never scored less than sixty points in an NCAA tournament. The last time the Buckeyes defense only gave up 41 points in a tournament was in 1941 against Havard, winning 46-38. Both teams had a defensive struggle, but the Buckeyes did just enough to advance.

With two more steals, six more assists, and three fewer turnovers than the Buckeyes, Loyola finished among the top 20 defensive teams in the nation. Buckeyes were up as many as fourteen points, but with 11:18 remaining in the game, Loyola Chicago’s cut the lead down to eleven.

“They came out there and competed, and we did as well. Both teams had tremendous defensive effort, not a high-scoring game and not the type of highlights one would expect, but those extra efforts on plays on the defensive end, I felt like we did that today,” Buckeye’s E.J Lidell said.

Drew Valentine was an assistant coach for Loyola from 2017 to 2021 before taking over the head coaching position in 2021. Winning the Missouri Valley Conference tournament title and taking the Ramblers to the NCAA tournament in his first season is an accomplishment, especially since he is the youngest coach in D1 Men’s Basketball.

Drew’s youngest brother, Denzel Valentine, played his collegiate career alongside three-time NBA Champion Draymond Green at Michigan State. Drew was also a graduate assistant at Michigan State. So coaching a team with an AP player of the year, which was his brother, potential NBA players under Head Coach Tom Izzo, and programs that constantly compete in the tournament is the expectation that he sets for himself.

Coach Valentine and the Loyola Chicago will now play in the Atlantic 10 conference starting the 2022-2023 season.

“Having the type of roster to fit our style of play and tempo will be one of the differences in the future,” Coach Valentine said.

Next for #7, Buckeyes will be a rematch of the Nov. 13, 2019, game against #2 Villanova, where they defeated the wildcats 76-51 in Columbus. The Wildcats had five players score in doubled-figures and led in both quarters. Villanova defeated Delaware to advance, and it was both teams’ 16th all-time meeting, including their first in the NCAA Tournament.

“We focus on winning the next possession, but when we struggled closing games, our defense had not been sound enough for long enough,” Buckeye’s Coach Chris Holtmann said.

On Sunday’s match against Villanova, the Buckeyes hope to carry that defensive mindset up against the Wildcats, whose starters light up the scoreboard against Delaware.