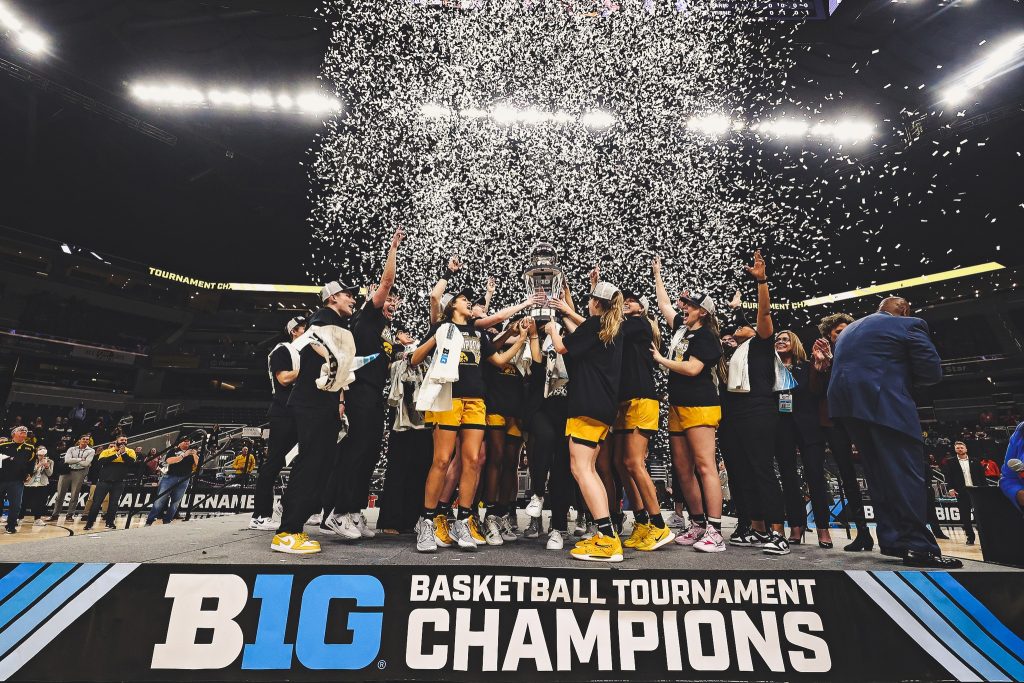 By Okon Ekpenyong, with additional reports from Sportzkel Media

There are 32 NCAA Division 1 Women’s Basketball Conference Tournaments. So far, eight programs have earned the title, including Iowa Hawkeyes representing the Big Ten, who won a wild one over Nebraska 74-67.

Monika Czinano was the MVP of the game, finishing with thirty points on 13-of-18 shooting and ten rebounds. Caitlin Clark leads the nation with over twenty-seven points per game; eight assists, but Clark had 18 points in this game. Clark is the Big Ten Conference Player of the year and a candidate for the Naismith Women’s Player of the year.

The Big Ten Women’s tournament began on March 2 and concluded on March 6 at the Gainbridge Fieldhouse in Indianapolis, Indiana. The Hawkeyes claimed its fourth title (2019, 1997, 2001) in the program’s history, and eight thousand seven hundred nine fans were in attendance to witness it. It was the highest record for a Women’s Big Ten title game.

It was their second trip to the title game for Indiana, and they won the whole thing back in 2002. Although they did not cut down the net this year, Head Coach Teri Marie Moren should be proud of her team because they were one of the complete teams in the conference, and they had some solid wins against the top 25 teams in the nation.

Despite the loss, Hoosier’s star guard NICOLE CARDAÑO-HILLARY said, “We guarded very hard, and they scored fewer points. I think that’s kind of our thing. We’re an excellent defensive team, and we just held them to those points”. NICOLE CARDAÑO-HILLARY was part of the Big Ten Women’s All-tournament first teams, including her teammate Grace Berger, Iowa’s Monika Czinano, Caitlin Clark, and Ohio State’s Jacy Sheldon.

Since 24 conferences have not crowned their champions yet, more upsets could be in the record book. The Biggest shock for all of the conference is the overall projected #1 team in the country, South Carolina, suffered only their second loss this season in the SEC championship game to a Kentucky team that is 19-11. There’s a reason why they call it Cinderella story and March Madness.

Some programs did not make it into the top 35 per Associated Press Ranking; for example, winning its conference title is one of the only ways to guarantee a trip to the NCAA Tournament. This year, NCAA will be giving 68 teams a chance to compete for the national title game scheduled in Minneapolis, Minnesota, on April 1 and April 3.

The biggest disappointment from the Big Ten Tournament is Michigan losing to Nebraska because they had superstars in all of its positions. However, that does not always guarantee a direct flight path to the championship game, especially to a team that beat you once during the regular season 79-58.

Out of the thirteen games played, the one between Nebraska Vs. Michigan was the most exciting forty-minute action in the Tournament because both teams traded baskets from start to finish. “A great basketball game probably for the viewers. I thought of two teams that played incredibly hard throughout the game, that’s it,” Big Ten Conference Coach of the Year, Michigan Head Coach Kim Barnes Arico said.

When the 1st quarter ended, it was a back-to-back competition between Indiana vs. Iowa in the Big Ten Women’s Tournament title game. Iowa leads 18-16 with the start of the 2nd quarter, where Clark, the conference player of the year, was held to only three points. For Indiana, Nicole Cardano-Hilliary once again led the charge in keeping her team close. Indiana’s defense continued to frustrate their opponents, and Iowa is the latest to find out how good the Hoosiers are. In Hoosiers’ game, Grace Berger kept her team pouring in ten points with 6:34 left to go in the 2nd quarter.

Iowa defense had Hoosiers guards praying for miracles in the first two quarters, but they still had two more quarters to regroup. Iowa was solid with rebounding the ball compared to their last game against Nebraska, and that was one of the difference-markers for the Hawkeyes. Indiana did force way too many unnecessary threes, and it hurt the team in the long run with 4:17 to go in the 2nd Quarter Quarter, both teams continued to battle back and forth, but Iowa kept a one-point lead (27-26).

Iowa’s Caitlin Clark, Conference Player of the Year, told Sportzkel Media how effective Indiana guards are. They made several adjustments on not turning the ball over too many times. “The last time we played them, we had so many turnovers, we gave them 30 points off of turnovers, and this was uncharacteristic. I don’t know why we were throwing some crazy passes. So, lesson learned. We took it forward today and didn’t do those same things today. So really glad that we valued the ball today”.

First half came to an end, and Indiana’s Grace Berger drove the ball inside and scored at the buzzer to cut the lead to 35-33. In the third quarter, Iowa did not score until the 6:45 mark as Hoosiers went on an 8-point run and stepped up their defense. Iowa’s Kate Martin’s fourteen-point effort gave Czinao and Clark a much-needed break in scoring. Iowa’s Monika continues to dominate while Clark finally finds her grove 4:30 in the Third Quarter.

One of the defining moments in the game was when Hoosier’s Mackenzie Holmes blocked one of Iowa’s guards driving to the basketball for a layup, which sent the crowds to overdrive at the 8:10 mark in the fourth quarter. Hoosier’s guard Cardano-Hillary continued her historic tournament journey with a step-back three to cut the lead to 60-57. She would go on to finish this game scoring 19 points while grabbing seven rebounds and three assists.

Upon completing the 32-conference tournament, programs will find out at 8 p.m. ET on Sunday, March 13, on ESPN if they were one of 68 teams selected to compete in the 2022 NCAA Women’s Basketball Tournament. After winning their conference title, Iowa automatically gets a bid to the Tournament and could get the #2 seed. For Indiana, they must wait and see what region they will play in and seed #.