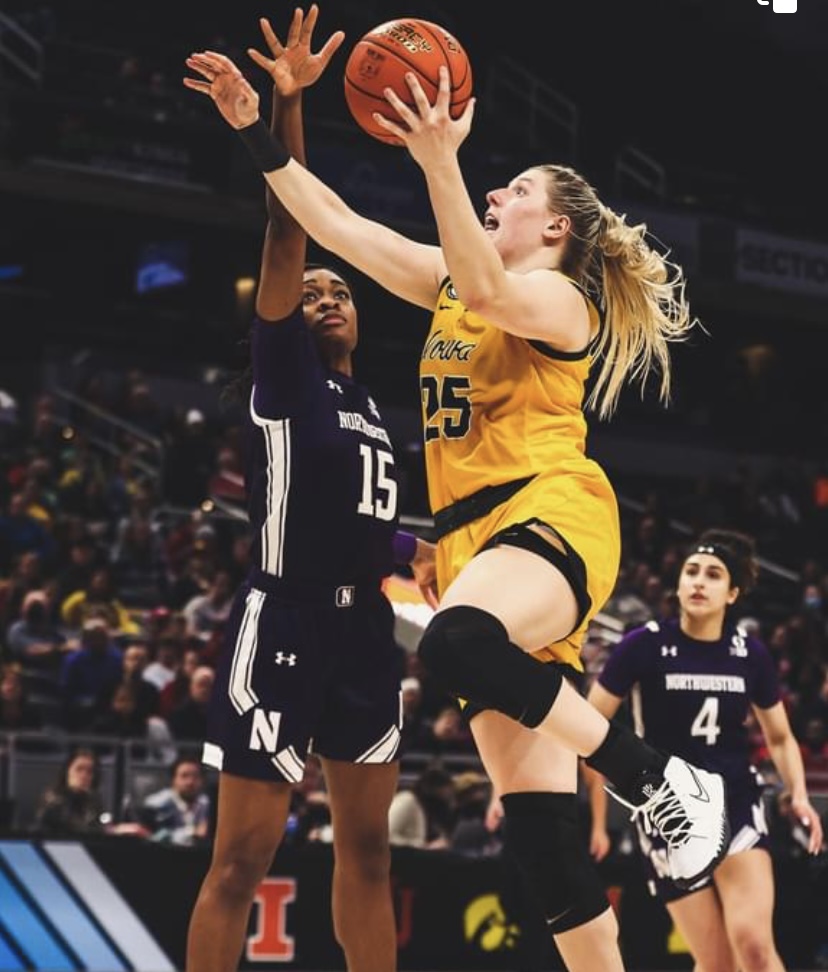 Number two seeded Iowa Hawkeyes pulls away from number seven Northwestern Wildcat 72-59 behind the versatile play of Conference player of the year. Caitlin Clark was floor general on both ends of the court, even when she wasn’t scoring. Before the Big Ten Women’s Basketball Tournament, all eyes were on Clark, but she lived up to the hype, especially for a Sophomore.

Clark led the nation in both categories for the year, scoring 27.5 points per game and averaging 8.3 assists. One of Clark’s most memorable moments occurred in Iowa’s victory over Michigan to share the Big Ten Regular Season Championship with Ohio State. For Friday’s quarterfinal game, she finished the game with nineteen points, grabbed 12 rebounds, and proves once again why she is the queen of assist with six.

When Clark faced the Buckeyes back on Jan 31, 2021, she had 43 points despite the 92-88 loss. The lack of critical contributors from other players on the team was one of the reasons they lost and could prove to be an issue during this year’s Big Ten Tournament and, of course, during March Madness. Even in this game against Northwestern, other starters did not score until 7:41 left in the third quarter. “Other starters do a lot of little things that don’t show up in the stat sheet, especially Gabbie, one of the best point guards in the country,” Clark said.

The Northwestern Wildcats, Veronica Burton, finished the night with 25 points, grabbed eleven rebounds, and dished out four assists despite the loss. The wildcats fell 18-14 in the second quarter after leading 17-14 in the first quarter. When they returned from the halftime break, they let the game slip away, giving up 25 points in the third quarter alone. With this loss, they finished their season 17-12 but remained hopeful for the next season after overcoming injury after another during this season.

“I thought the third quarter was critical—what an extraordinary first half for both teams. We had a hard-fought game. The pace was where we wanted it, and Iowa went on a bit of stretch, then we were back and forth,” Northwestern Coach Joe Mckeown said.

Iowa’s Coach Lisa Blunder told Sportzkel Media on having a conference player of the year:

“We’re delighted that we’ve had the Big Ten Player of the Year for four of the last five years. This one’s only a sophomore, so that bodes well for the future. But what I think is remarkable is that it was a center two times, and now it’s been a point guard two times, so it’s not just one position. Like, I know people are trying to recruit against us and say, Oh, they just coach centers, and then Caitlin comes, and she’s Big Ten Player of the Year. So I’m proud that they are in different positions; it just shows that we can coach wherever you are.”

Iowa’s Caitlin Clark told Sportzkel Media why it is critical always to play both defensively and offensively at all times.

“Obviously, as a point guard, you’re an extension of the coach on the floor, and there are a lot of different things you have to manage at the same time, like seeing the clock, knowing where teammates are, what play we’re running, what the defense is running. I think that’s something this team needs.”

“I’m only a sophomore, and seven turnovers are too many tonight. But I think that’s something I take pride in, leading this team and communicating all the time. I think there’s still room for growth in certain areas, but yeah, I think leading it is a massive part of being a point guard as well,” Clark also added.

Iowa will play #6 Nebraska in the semifinals on Saturday after defeating #3 Michigan 76-73 to win a wild one, and it was by far the best game of the Tournament.