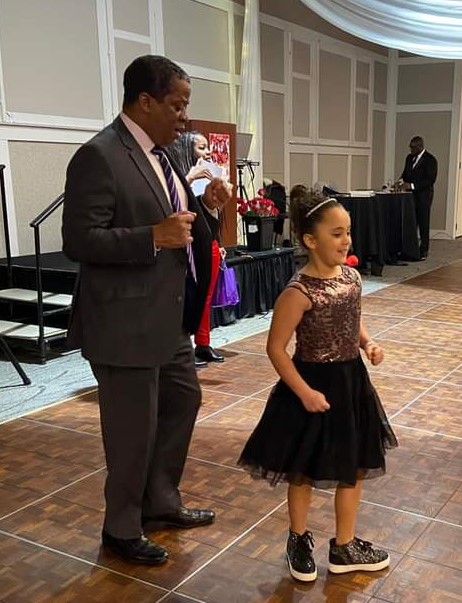 Positive Image Minneapolis hosted its Ninth Annual Father-Daughter dance, which took place on Sunday, February 20th, 2022, after a two-year hiatus because of the pandemic. This event took place at the beautiful Earle Brown Center in Brooklyn Center, Minnesota, and it was a night full of beautiful roses for a father’s first love, a delicious meal to go with the occasion, awards to celebrate those who strive to promote a more positive image of a father, and a dance floor to let loose while embracing the night.

“Mothers are an essential part of a child’s life, but a father and a daughter bond that’s unbreakable. Fathers teach their daughters how a man is supposed to court and treat a woman. So, it is beautiful seeing daughters dressing up and fathers courting onto the dance floor, showing them what an influential male figure in their lives should look like, indeed,” Shemeka Bogan, part of the media contact for positive image Minneapolis, said.

The organization strives to promote and encourage more community involvement through positive engagement with its partners and parents who actively seek to change the status quo. They are constantly seeking volunteers 24 hours to help keep the drive alive by promoting black male achievement, mentors to lead the friendship academy of the arts, and working with fathers to build a better relationship with their children through the Men’s Breakfast mentoring program. Organizing a positive image workshop series is another initiative to teach skills and the importance of outstanding quality in all that you do.

Throughout the night, Minneapolis’s positive image gave outstanding awards to fathers who did not just make a difference in their daughters’ lives—but partnered with local and national organizations to provide resources and promote an event such as this one. The 9th annual father-daughter dance had a packed house, and the organizer sold more than 500 tickets. Fathers and daughters showcased their dance skills on the dance floor, and photographers captured every moment that will last a lifetime for those daughters. The daughters wore their favorite dresses, while the fathers made sure that they too put on their best suits to remind them that such an occasion requires you to be at your best.

Over twenty-five young ladies in middle, high school, or freshman college also received recognition for being outstanding students on/off the classroom. They also had the opportunity to tell the crowds what they wanted to be when they grew up. When one of the girls said a federal judge, all attendees clapped while cheering her on.

Bogan also added that the organization has several annual events coming up this calendar year that the community should be excited about, indeed.

For example, on June 17-19, they will have the Father’s Day Weekend Golf outing; September will be the family fun challenge at top golf, a mother and son dance will be on October 23rd, and December will be the annual night of giving.

The New Americans Magazine caught up with Rodney Anderson to ask about fatherhood and his work in the community. “I am incredibly honored and humbled for this award tonight and grateful to Terry Austin for organizing this event and for this recognition,” Anderson said. Anderson also added that he had brought his two daughters to the father-daughter event every year; “they’ve been coming since they were four and five years old.”

Anderson also added that “he tries to be a mentor in the community, and it starts at home with my two daughters. It is a great way to spend time with my lovely daughters. I take fatherhood seriously, and quality time is critical. So, being the best father at home, I can help with instrumenting what a father’s role should be in the community.”

Anderson also encourages fathers who are active in their daughter’s lives to partner with local organizations to lend a hand to ensure that the younger generation has an excellent example of living up to and always striving for excellence.

Attendees also had the opportunity to witness talented performances and dances by the house of modern dance and the art of dance studio.