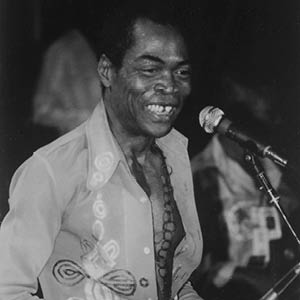 Nigeria’s music legend, multi-instrumentalist and Afrobeat pioneer Fela Kuti has once again been nominated for the Rock and Roll Hall of Fame., as 17 Nominees for 2022 Induction were announced by the Rock & Roll Hall of Fame Foundation in Cleveland, Ohio, United States.  Fans can start casting their votes on https://vote.rockhall.com/en/.

Seven out of 17 of the Nominees are on the ballot for the first time, including Beck, Eminem, Duran Duran, Dolly Parton, Lionel Richie, Carly Simon, and A Tribe Called Quest. To be eligible for nomination, an individual artist or band must have released its first commercial recording at least 25 years prior to the year of nomination.

“This year’s ballot recognizes a diverse group of incredible artists, each who has had a profound impact on the sound of youth culture”, said John Sykes, Chairman of the Rock and Roll Hall of Fame Foundation. “Their music not only moved generations, but also influenced the sound of countless artists that followed.”

Nominee ballots are sent to an international voting body of more than 1,000 artists, historians, and members of the music industry. Factors such as an artist’s musical influence on other artists, length and depth of career and the body of work, innovation, and superiority in style and technique are taken into consideration.

The Rock & Roll Hall of Fame offers fans the opportunity to participate in the Induction selection process with the 2022 Induction Fan Vote sponsored by Ohio.

Today through April 29, fans can vote every day at vote.rockhall.com, or at the museum in Cleveland. The top five artists, as selected by the public, will comprise a “fans’ ballot” that will be tallied along with the other ballots to select the 2022 Inductees.

Multi-instrumentalist and Afrobeat pioneer Fela Kuti fused music and politics to become a singular global revolutionary voice. Fela (Olufela Olusegun Oludoton Ransome Kuti) was born in 1938 into a politically active and musical Nigerian family: his father founded the Nigeria Union of Teachers and had a passion for piano, and his mother was known for her anti-colonial, Nigerian home rule movement advocacy. In 1961, while studying music in London, Fela formed his first band, Koola Lobitos, and quickly became a fixture on the London club scene. He later toured the United States, where he was influenced by soul and funk legends James Brown and Sly Stone. Reflecting the musical and cultural flavors of Africa and Black America’s Civil Rights Movement, Fela fused elements of traditional West African highlife, jazz, and soul music and dubbed this rhythmic hybrid “Afrobeat.”

Throughout his career, Fela showcased his love for jazz and soul on hits like “Water Get No Enemy,” “Expensive Shit,” and “Beasts of No Nation.” It was with the album Alagbon Close that Fela addressed the ills of the Nigerian government openly in his music. His revolutionary Pan African ideology was even depicted in his album covers, and he focused his music on provoking political change. Although vilified by the press and jailed for his anti-corruption stance, Fela was celebrated as a hero in Africa, and that soon stretched to a global reach.

“As an artist, the whole idea about your environment must be represented in music,” Fela said. “So, I think, as far as Africa is concerned … music has to be for revolution.” Even 25 years after his death in 1997, Fela Kuti’s innovative music, revolutionary message, and generational impact continue to represent the indomitable and evolving spirit of rock & roll.