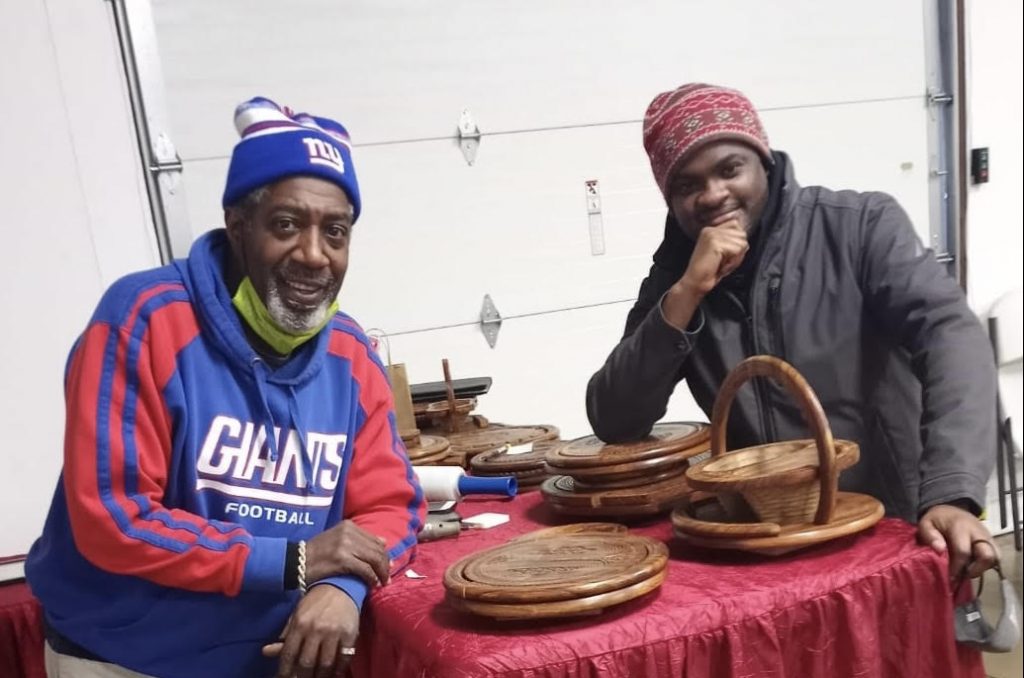 Artist Philippe Janvier is Haitian-American. At three years old, he and his family migrated to the United States. Forty-something years later, he’s a certified master crafter and has owned 20 championships in 11 states for his love of making trivets that transform into a basket.

Janvier and his wife Lucia Moya-Janvier met in the Bronx in 1999. They are both the proud owners of Princesita’s Magic Basket. “Both of us make the Baskets along with my Brother Greg Janvier, a mechanical Engineer who plays a big part in our success,” Janvier said. Janvier’s stepson, Greylin Moya, helps out on the Scrollsaw and has mastered the Art of the Scrollsaw. The company’s success required adding more staff since they constantly do multiple shows and have large orders to fill online. Other families from both sides of the family also worked with them to help take off the load.

Consumers can use the basket as a decorated piece for a fruit basket, candles, or other non-perishable items. When it is flat, the best way to expand it into a beautiful basket is by pulling the outer handle on each side, then flipping the handle towards you in an upward position.

Janvier is fluent in Italian after spending years working as a car salesman for a local Honda dealership in New York. While there, he would interact with thousands of people from different ethnic groups and learn a few languages through those interactions. The dealership opened a new location in Massachusetts, and he was one of the chosen managers sent to train new staff. “Things got a little boring over there, and I needed a new challenge to occupy my time, so I ended up enrolling at the New England School of Architectural woodworking in East Hampton, Massachusetts. After obtaining his certification, he tried various wood carving projects. “Making 3D effects baskets that transform a trivet into a beautiful artwork fascinated me the most,” Javier said. “Some of my work ranges from flower designs, Seashells, Angels, Hearts, Apples, and much more,” he added.

Since 2012, his artwork has intrigued audiences by its various designs and the ability to rotate in 3D dimensional shapes. He uses Five coats of Danish Oil to finish each piece. To date, the company has thirty-two designs and seven different sizes a customer can select.

There will always be different reactions to a product sold by an entrepreneur when they start visiting outside of their home base. Javier’s business was booming in New York, but his biggest fear was, “can I make money in other states” he said. Javier’s decided to take the company and move out of New York for a little bit but kept their apartment because they were still making money. The reaction from their first trade show attendees was not only positive, but they ended up making over six thousand dollars in profit. In the following show, they walked away with four thousand, and “it has been like ever since, Javier said.

The company has been to trade shows in Kentucky, Iowa and is heading out to Nebraska in June 2021. With the success of selling Princesita’s Magic Baskets across various states, Janvier wants to remind new entrepreneurs that they too can turn their biggest fear into their most significant accomplishment.

Using a scroll saw, he cuts the wood into a spiral and must follow a pattern carefully on a created template, testing for accuracy to ensure that it remains in the right angle from start to finish. Before cutting on a scroll saw, the crafter must determine whether they want to cut or shape the piece. Some can be clean-cut, flat polished, penciled polished, or beveled. In this case, it must be between 5.7 to 6.3 degrees on the scroll saw to make the magic basket.

When Twenty-One Pilots came to Columbus!

By Okon Ekpenyong When artists like “Prince” played at his hometown of Minneapolis ...

By Okon Ekpenyong Olympian Simone Bile, with her teammates, including Jordan Chiles will be per ...

Film Columbus announces winners of Film It In Cbus Awards