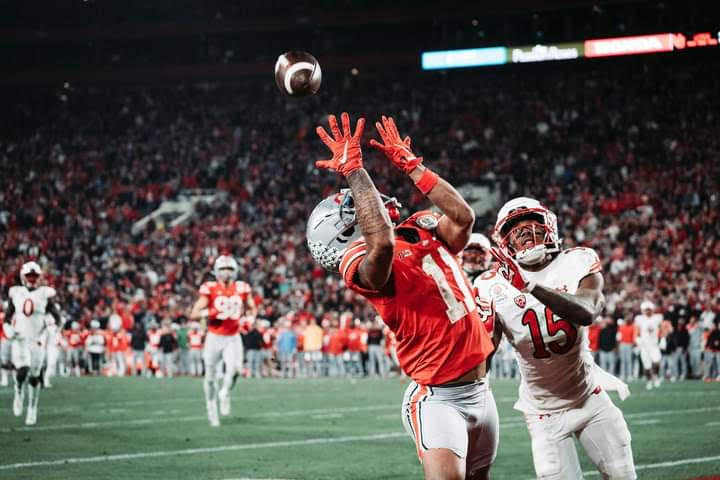 It was another historic night for the Buckeyes receiving and passing squad. The Buckeyes 5th year senior, Noah Ruggles, converted a 19-yard field goal with nine seconds remaining in the fourth quarter securing the Buckeyes 48-45 win over Utah to claim the 108th Rose Bowl.

Buckeyes Quarterback Freshman sensation, C.J Stroud, carried the game on his shoulders after the third quarter went to the air using a few critical receivers like number #11 Austin Mack.

Also, QB Stroud’s set a Buckeyes record with a single game passing yard with 573, and it broke former quarterback Dwayne Haskin’s mark of 499 yards he had in the 2018 Big Ten Championship Game against Northwestern. WR Jaxon Smith-Njigba finished the game with Football Bowl Subdivision, Ohio State Single-game, and Ohio State receiving record for a season.

“I am very proud of the coaching staff, the players, and the leaders of this time for playing the way they did. It says a lot about this team’s character, especially how the players responded in the second half having played short-handed because some of our guys were not here today”, Coach Ryan Day said.

“Every game, you’ll always have ups and downs, and it is a learning experience. We are young, but mentally it prepares you for the remaining season when you have those kinds of games under your belt”, Stroud Said. Stroud was referring to losing their 2nd game against the ranked Oregon team and a tough loss against Michigan, and also how those games helped with their mental preparation by not panicking and coming back in the second half to finish the season strong.

Utah Utes played in their first Rose Bowl in team history. They shut out the Buckeyes 14-0 in the first quarter and scored 21 points in the second, proving that they, too, can compete with the best even if they are playing against a storied program. Utes’ offense, however, collapsed in the third and fourth quarter by scoring only ten points, and with the unfortunate injury to their starting QB C. Rising near the end of the game. Their seasons ended abruptly, but credit to the team’s defense for keeping the Buckeyes from getting into the end zone. Instead of settling for a field goal to win the game 48-45.

“The intricate strategies within the games are so complex. Some fans may not understand, even those who have played the games previously. It is a sport where you rely heavily on others and have many different body types. The main objective of coaching is to develop these young men into great people. There are so many lessons to be learned in Football, for example, discipline, attitude, work ethic, and sacrifice. These lessons are far more important than the game of Football that will carry these young men throughout the rest of their lives.”

Buckeye’s defense made a few defensive stops, and the game swung our way. It is what the ROSE bowl is all about. The game going down to the wire made it an exciting night for football fans. The Buckeyes needed that momentum for the young athletes returning next year and for those players leaving the program to get this win at the Rose Bowl. It also highlighted to show us the skills for what is coming in next year for the team.

Back in the 1980s, OSU loved playing in the Rose Bowl that was and will still be the Grandaddy of Bowl games. This win was significant to Buckeye fans; many family relationships and fathers/sons have played in this bowl game. The nineteen players that didn’t play will regret not finishing out their collegiate legacy. These young guys think they are entitled to opt-out. It is not a guarantee that those who opt-out or enter the draft a bit earlier before their four years are up will have the opportunity to get drafted in the NFL, especially OSU athletes.

Overall, the team had players play that otherwise would not have played. They also had players that had to step it up both defensively and offensively in what could have been a better game if they had other players. They made several adjustments necessary to surge back into the game in the second half.” The fight to the end with all of the adjustments was grand,” Jessie Dingess, a vivid Buckeyes fan, said.

Ohio State appeared in their 16th Rose Bowl game, winning 9 out of 7. Usually, the games are between the Big Ten Conference and Pacific Coast Conference (Pac). University of Southern California (USC) has the most appearances with 34 games, winning twenty-five out of nine in history.