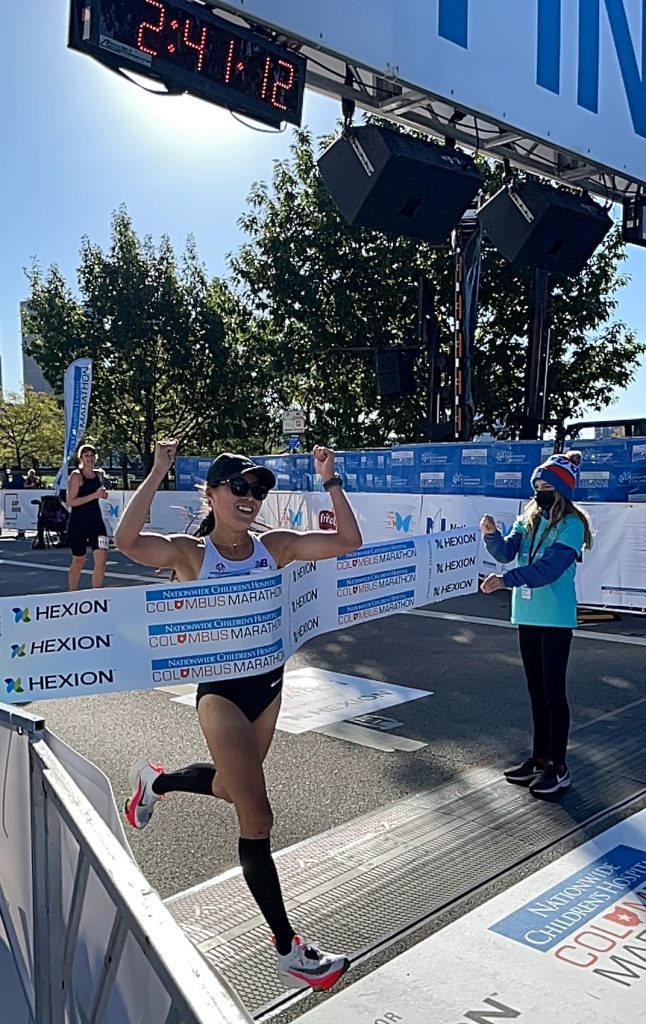 The Columbus Marathon saw 7,000 runners running in the full-marathon race and 11,000 in the half marathon, with James Ngandu finishing first in the Men’s Half Marathon at 1:03:45. It was his third straight win.

“When I see those kids out there cheering for me, it is what keeps me going, and I keep thinking that I may be back next year,” Ngandu said.

James has not tried out for the summer Olympics yet but wishes to start training soon with the hopes of one day running for his home country of Kenya.

“I mean, it does not come overnight, you have to keep on going, you’ve got to wake up and put the miles in today/tomorrow, and one day you could be the champion,” Ngandu said in his message to future runners wishing to compete professionally.

James Ngandu is a resident of Ohio and completed his collegiate career at Tiffin University in Tiffin, Ohio. The 2nd place winner was John Mastandrea from Mooresville, North Carolina, and finishing today’s race at 1:04:00.

Kristoffer Mugrage from Alamosa, Colorado, won the full marathon for the men, finishing at 2:17:03.

Sakiko Minagawa, who graduated from the Ohio State University and currently works as a registered dietitian at Nationwide Children’s Hospital won first place for the female full marathon, finishing with a time of 2:41:12.

Molly Bookmyer, another resident from the central Ohio area, won the half-marathon, finishing the day with a time of 1:12:19.

“I run competitively, and I qualified for the Olympics and another marathon, but I was injured and could not compete,” Bookmeyer said.

She will compete in her first New York Marathon in three weeks and hoping to use that as momentum to qualify again for the next Olympics.

“Just never give up, and believe in yourself, although there may be a lot of obstacles, keep trying,” Bookmeyer added.

Many local runners participated in the race, but athletes across the United States and the world also partake in the festivities.

At North Bank Park’s Neil Avenue and Long Streets intersection, the 41st Columbus Marathon kicked things off around 7:30 AM on October 17th, 2021. All runners had to be at least 16 years old by October 17, 2021, to qualify to run in the full marathon and at least 12 years old to run in the half marathon due to insurance restrictions. Parents’ consent or a doctors’ note was also one of the requirements.

The average time to train for a half-marathon for beginners is between three to four months.

Still, experts recommend jogging, run/walking, and even participating in short distance events like the 5k or 10k to help give an individual the momentum. An estimated time of 2:05 to 2:15 is the average for the male runners and between 2:20 and 2:30 for the female runners. So, during your training session, watching and calculating your time is essential for all runners, regardless of if you are a beginner or professional.

Minor injuries can happen in a half marathon for runners, significantly since the body must endure running for 26.2 miles for the full marathon and 13.1 miles for the half marathon.  Some runners may experience having lower body pain, muscle pain to the calf’s area, and possibly pulling a hamstring. Relaxing the body immediately after the run is one of the recommendations to avoid hospitalization, as well as gentle stretching, drinking plenty of water, or eating protein bars.