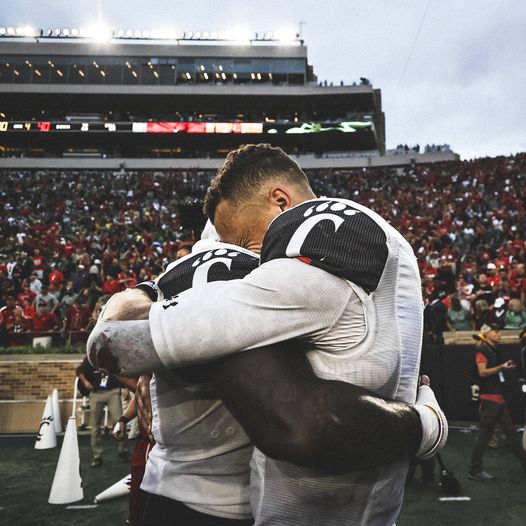 Kicking off week five in college football, the Buckeyes are starting to hit their stride and they take their newfound confidence into Rutgers. Ohio State let it be known and answered with a big statement win 52-13 and quiet the talks and whispers about CJ Stroud getting benched.

His numbers have improved consistently and gotten better through the weeks, his confidence has grown a lot, not to mention being under fire for his performance after coming into the program as a high five-star recruit.

With 17-23, 303 YDS, 5 TDS Career high, he has proved why Ryan Day has so much confidence and why he kept him as the starter. It really is going to be a week-by-week improvement for the Buckeyes, but talent is the key for them and what is going to keep them in these games.

The shocker that happened over the weekend was the 7th ranked Cincinnati vs. 9th ranked Notre Dame game. The Bear cats came into South Bend and put the college football world by storm, made it known that they need their respect.

Ready to make their push for the playoffs beating the fighting Irish 24-13. Head coach Luke Fickle said “We didn’t just beat a top-10 team; we beat a top five program.”

Desmond Ridder a 5th year senior QB came back after last year’s lose to Georgia in a close game in the peach bowl and came back for this very reason to prove and show that Cincy is a real team and need more respect by the college football community. After Ridder went for 19-32, 297 YDS, 2TDS, th Cincinnati will likely be in the playoff.

Capping off the weekend slate we take a visit to camp Randell stadium. Where the 14th ranked Michigan Wolverines took on the Wisconsin Badgers. Michigan has not won at Wisconsin in 14 years, Cade Mcnamare and Jim Harbaugh had something to say about that.

Winning the game 38-14 the Wolverines snapped their losing streak in Madison, it was another showcase for the Michigan offense to show that they are not one dimensional and have other facets to their game.

Mcnamare went for 17-28, 197 YDS, 2TDS still improving and getting more comfortable and knowledge of the offense, the defense showed that they can get after the quarterback and get the pressure. The talk is getting loud in the media about Michigan being back. The bias quote of the day is that I’m still not sold all the way on what I’m seeing on the field.

I still feel like I need to see more explosive plays in the passing game and the cornerback position is still a red flag in my eyes. Michigan has three players in all three levels on defense Daxton Hill at safety, Aidan Hutchinson DE, and Josh Ross LB all leaders but what happens when one of them goes down who is picking up the slack? Question that still need to be answered possibly could get them answered when the Wolverines take on Nebraska this weekend.