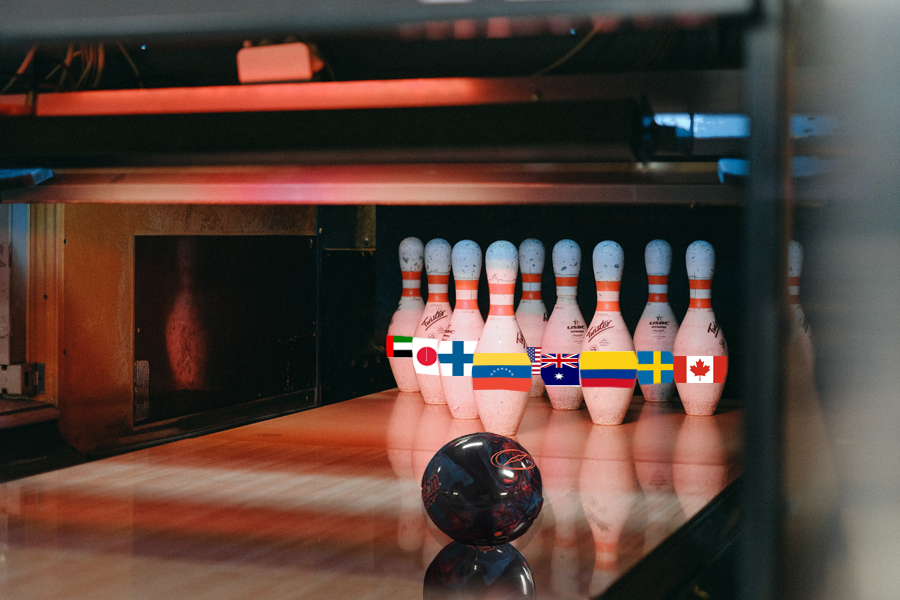 In the sports world you often hear the phrase “the best in the world”. A lot of time that comes with a caveat. For instance, you hear someone is the best football player in the world. If you are talking about American football then that caveat comes into play. American football is not really played a lot outside of North America, so the phrase in the world does not really apply as the world is not included in that.
I believe that in order to be called “the best in the world” the rest of the world has to at least participate in that sport. You can call Novak Djokovic the best male tennis player in the world, the rest of the world plays tennis. You can call Serena Williams the best female tennis player in the world for the same reason.
In the Professional Bowlers Association you hear that phrase a lot too. The best in the world. They can say that though. Out of 82 touring professionals in the PBA, 12 are from other countries.
Not only do they play the game, but many of them have also changed the way the game is played. Take for example Amleto Monacelli. Amleto was one of the first international players in the PBA joining in 1982. He was one of the first to use the “cranker” style of bowling. When he first arrived in America to bowl he picked up a coach who told him he would never be any good and that he should change his style. Amleto did not listen, for good reason. He went on to win his first title when he won the 1987 Japan Cup. He has gone on to win 29 titles in his career. They are 19 touring championships, one major the 1989 Budweiser Touring Players Championship, and 9 PBA Senior titles.

He changed the game with his high back swing cranker style. The very style that you see a large number of the player use today, both amateur and professional. He was also the first international player to win the PBA Player of the year award. Since then Mika Koivuniemi of Finland, and Jason Belmonte of Austria have won the honor.
Another of the older players to have won big on the tour is Finish bowler Mika Koivuniemi who has 11 standard titles and 3 majors who himself is headed to the PBA Hall Of Fame and is currently bowling in the PBA Senior Tour (PBA 50+)
Modern day international success

Of the 12 active touring international players there has been huge success. Jason Belmonte who is considered to be the best in world did the same thing that Amleto did. He changed the game again. He brought his two-handed style that he had been using since he was a child to the PBA. Growing up in New South Wales, Australia his parents owned a bowling alley. As most parents do they took Jason to work with them. The only way he could throw the ball at that young age was with two hands. He never tried to use any other style and became the best in world at doing it.

Belmonte has accumulated 7 PBA standard titles, 7 PBA major titles along with being named player of the year along with six player of the year awards and more. He is obviously on his way to the PBA Hall of Fame. Hall Of Fame Member Norm Duke said that the believes that Belmonte is absolutely the best in the world.
Belmonte however is not the only international player to have success. There is the two-handed power of the tall Swede Jesper Svensson with his 9 standard titles and 1 major is also destined for the Hall Of Fame. There are more though.
The next international player you cannot count out is the soft-spoken French Canadian is 28-year-old Francois Lavoie. Franky as he his affectionately known among the other bowlers gets a lot of love from the fans due to his soft spoken, nice guy attitude that the exudes on the lanes has 2 standard titles and 3 Majors.
Some of the others are Dom Barrett from England, Andres Gomez from Colombia, and Sam Cooley of Australia only to name a few. The international factor does not stop there. It also includes the women of the PWBA as was on display in the recent King of the Lanes Empress Edition in which 5 of the eleven participants were international players.

The impact of international play and players.

Some of the impact was discussed earlier by Amleto and Jason. They changed the style that some players use forever. On the other hand, you have Fracois who still uses the old school down and in style of the greats. Tom Daugherty called him “baby Norm” on a recent telecast. That is a wonderful comparison to one of the all-time greats Norm Duke.
There are international tournaments that the players love to bowl in. One of the most popular is the DHC PBA Japan Invitational held yearly in Japan. There are also tournaments in Indonesia, Thailand, South Africa and Dubai. All of these events give players from all over the world a chance to compete against each other. These competitions provide unique experiences for the players to get to meet people from all around the world and build friendships that last a lifetime.

The diversity makes the game great

It is this diversity that makes Professional bowling a lot of fun for me and other viewers. You truly do get to see the best players in the world on any given telecast. Bowling is a unique sport in that it does not matter so much about how you do it. There is also a large diversity of styles in the PBA from the classic one hand, the cranker one hander, to the two-handed bowlers and some other styles that only that particular player have perfected, such as Tom Smallwoods’ one hand delivery that he has to drill his balls in one certain way. There is Tom Daugherty and his one hand no thumb style and on and on.
The diversity of the players, the styles and the equipment means that just about anyone who puts in the time and effort can become a good bowler. That is what makes it loved worldwide. That is why the bowlers can call themselves “The Best in The World”. (Brad Finnearty is based in Lancaster, Ohio. The owner of The Big Rad Saloon magazine is a columnist for many sites, former webmaster and a Veteran of The United States Air Force Reserves).