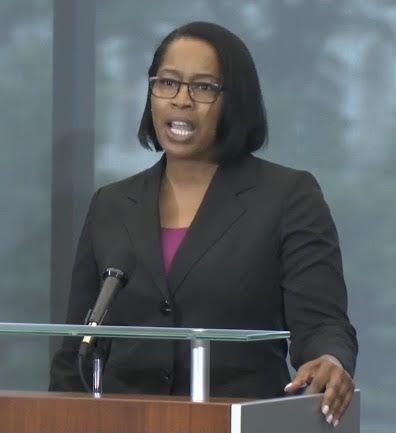 Columbus City Mayor Andrew Ginther has announced the Detroit Assistant Police Chief Elaine Bryant as the new Columbus Chief of Police. Elaine R. Bryant is the first-ever African American woman and external candidate to serve as chief of police for the City of Columbus.

“It is with great pride and enthusiasm that I announce Elaine Bryant as our City’s next chief of police,” said Mayor Ginther.

“She is a transformational leader with sound judgment and considerable experience, an effective advocate for change whose actions are rooted in compassion, empathy and engagement with those whom she serves and leads. I am confident that she is the right leader at the right time for the City of Columbus.”

Bryant is a 21-year veteran of the Detroit Police Department where she served in multiple capacities, including patrol, investigations and administration. During that time, she ascended through the ranks – having been promoted five times from patrol officer to deputy chief – and coordinated Detroit’s response to several high-profile events, including the 2006 Super Bowl.

“I am deeply honored to serve as Columbus’ next police chief,” said Bryant.

“This is a pivotal moment to be stepping into this role, and I am firmly committed to embracing change, diversity, and clear and open communication to improve safety, enhance accountability and rebuild trust between officers and the community.”

“As our City continues to see an increase in violent crime, it is vitally important that we advance the important work of implementing a 21st-century community-policing model,” said Columbus Public Safety Director Ned Pettus.

“Chief Bryant has a proven track record of diversifying and transforming law enforcement to improve effectiveness and quality of outcomes. I look forward to seeing her make a similar impact in Columbus.”

Also, in a statement the Columbus City Council President Shannon G. Hardin said “I welcome Chief Elaine Bryant to her new role in Columbus. Drastic reform is necessary to rebuild trust between officers and residents across our neighborhoods. At the same time, we all need to work together to interrupt the record-pace violence we’ve seen on our streets this year.

“Council will continue to be deliberate in our efforts to reimagine public safety in our city, and I look forward to having a partner in this effort in Chief Elaine Bryant.”