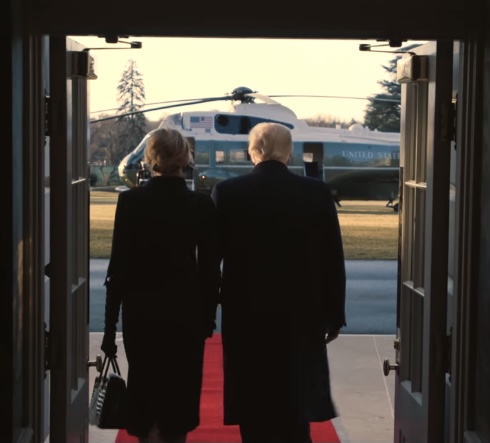 The whirlwind of Trump’s chaotic presidency comes to an end, leaving behind destructive remnants that would take years to clean, clear, or rebuild. A Capitol still reeling from the violent assault by Trump supporters, a political crater that could prove difficult to level, a permanent dent on America’s democracy…

The twice impeached, one-term president is handing over a nation debilitated by the pandemic, with deaths now over 400,000 and estimated to reach half a million by February. The beleaguered president is leaving a country with bottled-up grief because he did not allow America to grieve its dead. He downplayed the pandemic and denied the resulting deaths. Bereaved Americans had to suffer privately, individually without a formal national acknowledgment of their losses or memorial.

Apart from allowing the pandemic to wreak havoc among Americans, Trump left a healthy economy that Obama handed to him in tatters. Millions of Americans are struggling to put food on the table. Businesses are struggling to stay open, and many have shut their doors forever.

The four years of cacophonous MAGA chants, petulant pettiness, and cantankerous confrontations end like soundless snowdrops in muted reaction to gravity. Trump has remained silent and out of public view since social media platforms muzzled him to prevent him from inciting further violence after the January 6 insurrection.

The bellicose Republican strongman has become weakened after his unsuccessful coup to overturn the 2020 presidential election results. He spent over two months lying to his MAGA faithful that the election was stolen from him. He couldn’t accept that a man he calls “Sleepy Joe” defeated him, even in Republican strongholds like Georgia and Arizona. Trump was caught napping while Biden galvanized the coalition of the aggrieved to oust the divisive president. Trump couldn’t accept that many Americans have grown tired of his unprovoked bellicosity, outstanding ineptitude, and pathological prevarications.

While Americans were dying in hundreds of thousands, he was focused solely on retaining power at all costs. He denied the humanities of the dead by denying that their deaths resulted from COVID. At the end of his quest to retain the presidency, he sacrificed four additional lives, including a Capitol police officer on January 6. Many of his rioting supporters will spend monies on lawyers to defend federal criminal charges levied against them, and many will end up in prison as felons, their lives destroyed.

The wake of Trump’s departure is like that of a devastating tropical storm. America was browbeaten for four years by Hurricane Trump. It is now time to rebuild, pick up the broken pieces and put our lives back together. We build levees to avoid future water breaches after a hurricane. In the same vein, we have to hold Trump and his accomplices accountable to shore up our democracy and prevent future coups.

I grew up in a country where a coup was the norm. One coup, successful or not, inspires the next one, and the cycle continues. America has experienced its first coup. The images of the January 6 insurrection are now advertisements and recruiting propaganda videos for future plotters. The only way to discourage fledgling Trumpists is to forcefully wield the power of democracy and the rule of law against the leaders, instigators, and perpetrators of the failed coup.

Trump’s incessant frontal assault on the rule of law and democratic institutions has shattered America’s international image and myth of invincibility. To avoid further regression, the Senate must convict and ban him from holding federal offices in the future. The incoming Department of Justice must prosecute him criminally for the attempted coup and the resulting deaths.

Emmanuel Olawale is a lawyer and author based in Westerville, OH. He is the host of the podcast, Legal Angle and the author of “The Flavor of Favor: Quest for the American Dream.

How Trump is Vaccinating Americans

By Emmanuel Olawale Esq. On July 8, 2020, I authored an op-ed warning Americans about the autho ...