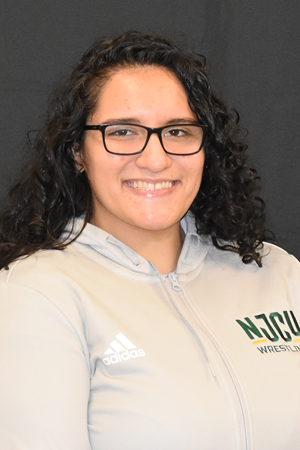 Sandra Guerrero, who is from West Orange, New Jersey was recently crowned regional and state champion making her the first state champion in the program’s history.

She dominated the competitions with a 22-0 record and 21 pins. Even at a recreational level that is a tremendous accomplishment.

In 2021 Guerrero will be making her freshman debut in the green and gold at New Jersey City University. The college is also making history by being the first college women’s wrestling program in the state.

Female wrestling already had a buzz in New Jersey, but now female wrestlers from the Garden State have the option to continue the sport they love in college and remain close to home.

The team will be coached by Elena Pirozhkova, a former world champion and two-time U.S. Olympian.

With Covid-19 still plaguing our country the student athletes go through regular Covid-19 testing before entering the athletic facility.

Traveling has also been limited due to Covid-19 because a lot of the female programs are located out of state. Despite all the challenges they are faced with, the student athletes are determined to follow the rules and regulations set in order to make it through a full season.

The first round of competition is scheduled for February. Their male counterparts have nothing but respect and support for these courageous female athletes pushing through all challenges to open new doors in this great sport.

Devonta Smith, the man under the pads

In the small town of Amite City, Louisiana was not the biggest or the strongest wide receiver in the nation but a player that will put the work in and fight all odds to become the greatest.

Devonta Smith said that his parents both instilled in him a good work ethic and to never give up on his dreams.

Upon arrival to Alabama, Smith was still getting acclimated to a new system where in his freshman year, he only had eight catches for 160 yards. But as the years went his games recorded improvement and progression.

From his freshman year to his senior year Devonta Smith has recorded 117 catches over 1,000 yard receiving. He is the first wide receiver to win the Heisman since Desmond Howard in 1991.

“It means a lot. Just some of those people have seen me since I was a little kid playing youth football, youth basketball, just seeing me come up, and just they’ve been there every step of the way, even when I decided to come here. Some of them, they still decided to just follow my journey and just be there with me every step of the way,” Davonta told reporters. The next chapter in his football career is to wait for the NFL combined and draft which is coming up soon. He is projected to be a first rounder and possibly be in the top 10 to 15 picks this year. The future is very bright for the bright and talented young athlete