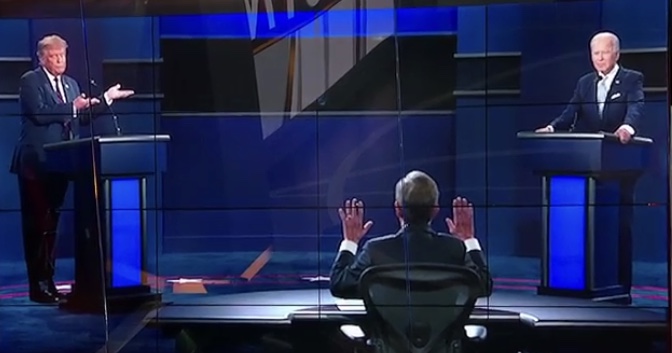 I hope that the next debate will focus on the future, on vital issues and decisions that the next President of the United States will have to make. On the substantive issues that this country faces, this is very important election.

I believe his tough stance on trade negotiations will continue in the future to expand job and growth in Ohio and this country.

I know Joe Biden for many years. I have served in the United States Senate with him. For many times, we may have disagreed on policy issues. I know that he too wants what is best for this country of ours.

Now each of us saw this debate through our own eyes, our own lens and through the prism of our beliefs in the candidates that we support.

However, I do believe that there can be an agreement as we, as Americans, have a right to in the next debate. What is needed in the next debate is a robust and energetic debate on the challenges that the next president will face.

As in Presidential debate of the past, each candidate has an obligation to articulate his vision for the future of this country; to articulate what kind of a country that the candidate believes we should be leaving to our children, grandchildren and great-grandchildren.

Hate in America is something that deeply concerns me. The fringe groups and individuals in this country, of both the right and the left, who simply do not share our common values, who do not share the great values of this country – the haters, the people who hate Jews, Muslims, African Americans and we can go on – there is no place in America, in this great country for that.

There are also people who believe that violence is the way to achieve political ends, that is not right. And I want to again speak out against that.

In all aspects of our lives, we simply must not allow hate to prevail over love, over kindness and our compassion, especially in this time of uncertainty, fear and division.

To paraphrase the words of Martin Luther King Jr., “Hate is too great a burden for this country.”

On the sanctity of Ohio election process, we have a long history of running a fair and transparent elections. Because of laws passed by the General Assembly, works done by the Democrat and Republican Secretaries of State in the past and work done by current Secretary of State, Franklin LaRose, and because of Democrats and Republicans working together at county levels and at the precinct level, they have worked together successfully for decades, because of this history and because of what we have done in the past and what we are going to continue to do, Ohioans can be assured of fair and orderly elections in this November.

As our history has proved, election process in Ohio is orderly, it is transparent, and it is bipartisan, and Ohioans can and should expect the word of the people in November will be respected.

In Ohio and in this country, elections are safe. There is a sanctity to our election process. We give them proper respect.

There is a reason, the flags outside the polling places, they are not only to signal what that precinct does or where that polling place is but they also saying to the approaching voter that this is truly a special place. Inside these flags, you and your votes are safe.

My commitment to every Ohio voter is this, we will not tolerate any interference in this sacred process. We will, as we have done in the past, protect each citizen’s right to vote and they have their vote counted.

The system, this bipartisan system has worked in the past and it will work again.

The last day to register to vote is Monday, October 5, 2020 if you are not registered. You can do it at the Board of Election or if you want to register online go to voteohio.gov. If you have registered and you are not sure about it you can contact the board of election or go online.

For a decade now, Ohioans have enjoyed a menu of options for casting their ballots. If you like to vote on election day, November 3, 2020 that option is protected and open to you. The polls will be opened from 6.30 a.m. to 7. 30p.m. You can find your polling place on voteohio.gov.

If you want to vote in-person and you won’t have time on election day, your county board of election will begin opening early their vote centers on Tuesday, October 6, 2020. You can see the hours and locations also on voteohio.gov. If you prefer to cast your ballot in the privacy of your home, Secretary Frank LaRose has mailed absentee request forms to all registered voters. Fill it out and mail it in today.

If you misplaced that application or accidentally threw it away, you can download a new form at voteohio.gov.

One thing we’ve done well in, throughout our history, is the transfer of power after an election. Sometimes, the former President is reelected, sometimes it might be an open seat or sometimes it might be a situation where the incumbent loses, whatever the situation, since the beginning of this country – how hardly contested these races have been, how emotional people get – when the results are in, people will accept it. We might not like it, but we are Americans, we will accept it.

“We as Americans understand the transfer of power. We get it. We do it right.”

We are Americans and we do it very well and we will do it this year as well.