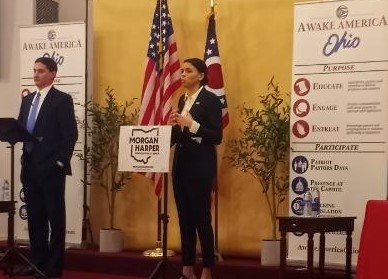 The debate was broadcast live on Matter News, a non-profit news platform that focuses on specific issues to empower change. Its Co-founder and Managing Director, Cassie Young, was the co-moderator along with Dan Wolvin, pastor of North Columbus Baptist Church and director of the conservative ministry advocacy organization, Awake America.

Josh Mandel is a former Sergeant in the Marine Corps Reserve, Ohio State Rep., and the 48th Treasurer of Ohio. Josh is not new to the U.S Senate race; he previously lost to Senate Sherrod Brown in the 2012 general election and dropped out in 2018. Meanwhile, Morgan Harper lost in the primary race in the 2020 election against Congresswoman Joyce Beatty, representing the Ohio 3rd congressional district.

The current Senate, Rob Portman, announced on Jan 25, 2021, that he would not seek re-election to a third term. That decision opened up opportunities for candidates from both sides of the spectrum, including Josh Mandel, who is leading the poll right now, to fill the seat.

So far, there are 12 candidates, including Mandel running in the Republican Primary. Meanwhile, in the Democratic Primary, we have Morgan Harper, the former candidate for Ohio’s 3rd congressional district in 2020, and Tim Ryan, a former candidate for President of the United States in 2020 and a current congressman for the Ohio 13th congressional district. Ryan is the Democratic nominee and front runner, but he was not present during the debate.

Mandel and Harper both took a shot at Congressman Ryan for refusing to debate either one of them. Harper previously stated that Ryan refuses to because she is a black woman, and Mandel agrees. Mandel proclaims a pro-trump, pro-life, pro-gun, and Christian conservative and calls the Black Lives Matters movement a thug organization. He also states that the Biden Administration is a complete joke without a specific plan from beginning to end.

During a brief one-on-one conversation with a potential voter and a member of the BLK movement, activist Julian Mack, the U.S Senate hopeful Josh Mandel was asked not to refer to protesters as “thugs.” Mr. Mack kept his composure and reminded Mandel that connecting with the African American community might be problematic due to his stands. Mandel kept reminding Mack that anyone who destroys a building or breaks windows is nothing but a “thug.”

“If I’m saying, look, this is respectful, right? Hear me! Understand where I’m coming down from, please. It is a toxic trope that has existed for too long,” Mack said. “Somebody needed to tell me, you know! And I tried to do so in the most respectful manner possible,” he added.

As the director of Awake America, Dan helped organize about 440 independent Baptist Churches and pastors across Ohio to engage more with their legislators. The intent is to bring those legislators to engage with the community to make good relationships in a faith setting. “We want to try to educate everybody about the legislative process because even those who are born and raised right here and don’t quite understand the process,” Dan Wolvin said.

Although it is the first time hosting the event at the church, Wolvin added that they had held two or three different rallies or town hall meetings to allow voters to engage with candidates.