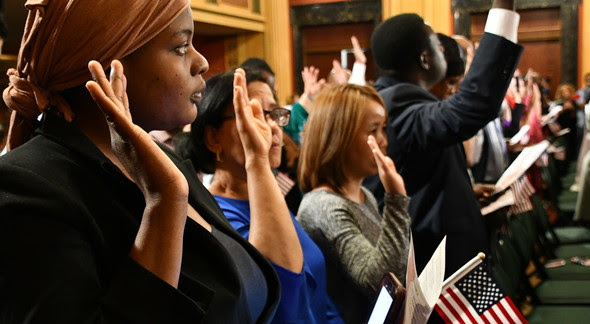 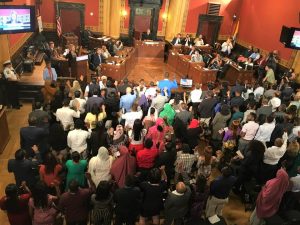 “I was so excited to celebrate these 111 new American citizens from 35 countries,” said Councilmember Emmanuel V. Remy. “The immigration process is long and arduous, and it’s thrilling to watch folks achieve their dream of American citizenship.”

A naturalization ceremony occurs when foreign-born immigrants are conferred U.S. citizenship after he or she fulfills the requirements established by Congress to become a citizen. During the ceremony, immigrants recite an Oath of Allegiance to the United States and receive their legal documents denoting their new status as American citizens. The youngest person welcomed was 19 and the eldest 76.

“The United States is a nation of immigrants and refugees, coming from all corners of the world to weave the story of America,” said Remy. “These new American citizens and their families will help us tell our story here in Columbus.”

The ceremony, presided over by Chief Judge Edmund A. Sargus, Jr. of the Southern District of Ohio, featured the Presentation of the Colors by the Benjamin Franklin Chapter of the Sons of the American Revolution, opening remarks from Councilmember Remy, remarks from other members of Council in attendance, and welcoming remarks from our featured speaker, Columbus City Attorney Zach Klein.

“From my time on Council to my tenure as City Attorney, I’ve been honored to help and work alongside immigrant communities. Columbus is lucky to have diverse perspectives from all over the world – these ideas are a tremendous asset to us all.”

“I hope these new American citizens feel empowered to speak up and make their voices heard in shaping our community,” said Council President Shannon G. Hardin.

“As Columbus expands over the next few decades, all of our input will be needed to ensure our community’s growth benefits everyone.”

“Most Americans were born here, but these 111 are special – they chose to come to America and to go through the immigration process, and I’m thankful they’re here,” continued Remy.