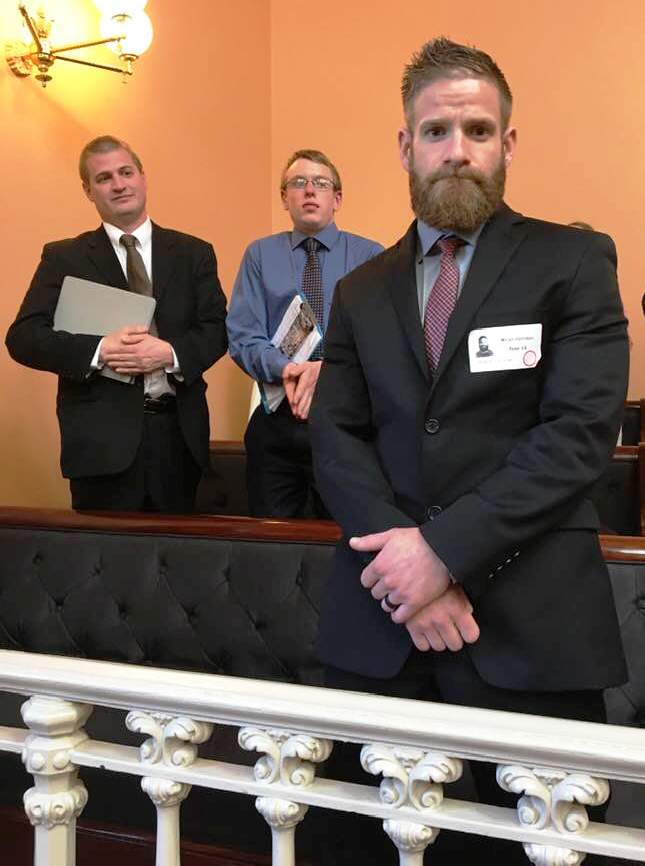 The beauty of covering the Ohio Statehouse is always the surprise but exciting moment. As recognition of young and old making significant impact in Ohio State was in progress on Wednesday, May 1, 2019, the announcer mentioned Micah Herndon, “a U. S. marine vet” who ran the April 15, 2019 Boston marathon finishing the race by crawling on his knees to the finish line. Immediately, that sight in a video that went viral came to my mind and right behind me at the media box was Micah Herndon standing as he was being recognized. I had watched that video several times and had wondered how he must have crawled himself to the finish line on the hard surface road. With six miles to go in the 26.2 miles marathon, Micah told me his “right leg locked up” and at Mile 22 his left leg “locked up.”

‘It was the roughest and toughest I ever ran in my life. I was able to finish on my knees.”

Two things propelled him to finish the race and they were in honor and memory of four of his brothers and his continued efforts to cope the posttraumatic stress disorder, PTSD.

“If I didn’t finish I would have done them (brothers) great injustice and the family as well. It is the least I can do because they are not here anymore. They can’t run.”

“The reason why I do run also is for my release. I have PTSD and Survival skill and I want all the survivors out there not to be ashamed of it or be afraid to admit that. It brings the strongest man to the mix. “

Interestingly, Micah is “recovering but I am still a little bit tight. I have been doing a couple of runs since then. Not back at full 100 percent. I will get there.” He has already entered for the New York marathon coming up November 3, 2019.

The notice for the Wednesday, May 1, 2019 session at the Ohio Statehouse contained the Swearing-in of Representative Tim Schaffer to fill the vacancy in Ohio’s 20th State Senate District seat, which includes Fairfield, Guernsey, Hocking, Morgan and Muskingum counties and parts of Athens and Pickaway counties.  I mentioned in the last column that I couldn’t interview him after his last session at the House of Representatives and so it was an opportunity to meet him at the Senate this time.

Senator Tim Schaffer described his new position as “an honor and privilege. I am looking forward to serving the 20th District. It is a large district. I have worked in other capacity in the business world and for other candidates. So I am really looking forward to rolling my sleeves up and representing them well.

He wants the district to “expect great economic growth, plans and legislation, good pro-family plans and cut in taxes. It puts more capital on entrepreneurs’ pockets. They build businesses and create jobs.”