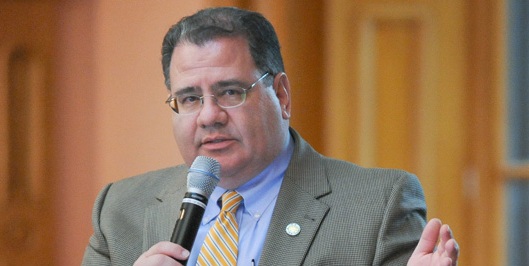 At the end of session at the Ohio State House of Representatives on Wednesday, May 1, 2019, I made my way to the back of the Chambers for Representative Tim Schaffer (77th District) to ask for more clarification on House Concurrent Resolution 8 that was adopted in the House by 96 – 0 votes.

The H.C.R 8 will encourage the Administrator of the FMCSA to change the crash indicator BASIC regulation standards to consider only crashes in which the driver was at fault for the crash.

My interest was because of the test case which had to do with truck driving. There are a lot of new Americans in this transport sector.

Rep. Schaffer had left when I got to where I spotted him earlier, so we were not able to have the discussion.

The vacancy was created last month when former State Senator Brian Hill resigned for a job in the private sector.

Schaffer was selected from nearly a dozen applicants for the open seat.

“We met with some outstanding candidates to represent the 20th Senate District, and I appreciate their interest and willingness to serve,” said Senate President Obhof.

“As a former member of the Senate, Tim understands the issues facing Ohio, and we look forward to welcoming him back.”

Schaffer previously served in the Ohio Senate from 2007-2014.