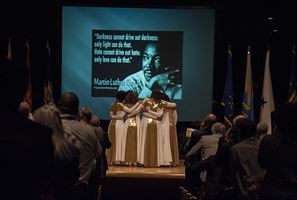 From poetry to dance to songs to motivational speakers, Defense Supply Center Columbus celebrated the life and legacy of Dr. Martin Luther King Jr. January 20 , 2016 inside DLA Land and Maritime’s Building 20 auditorium.
Celebrated on the third Monday of January, the remembrance of Dr. King is a time when the nation pauses to remember his life and work, but also to honor his legacy by making the holiday a day of community service.

“There will never be another Dr. King, but we can learn from his example, take inspiration from his accomplishments — and make a real difference,” James McClaugherty, Land and Maritime’s deputy director, said.
McClaugherty told a story about when he was in school to become an Air Force officer he came up with four values he aspired to live by throughout his career. When asked to research who lived by those values before him, the answer was easy—it was Dr. King.

“Dr. King boldly challenged our thinking and forced America into self-examination, helping us to change, to grow, to prosper,” “I like to think that we hold these same principles here on this great installation, always striving to change for the better, grow and prosper.”

The guest speaker was Emmanuel Olawale, a trial lawyer in the Columbus area. Olawale described how his life story is a testament that the American Dream is not just a fantasy, but a      reality.

Arriving in the U.S. in 1997 as an immigrant from Nigeria, Olawale came only with “big dreams and a determination to succeed.” His parents instilled the values of hard work and never giving up, but he was unprepared for the sudden recognition that he was a social minority.
“One of the first shocks on my arrival was the realization that I was ‘black’,” Olawale said. “I grew up in the most popular black nation on earth, Nigeria, where being black is not an identifying feature. But in the U.S., I realized that being black is different than being black in Nigeria.”

“There will never be another Dr. King, but we can learn from his example, take inspiration from his accomplishments — and make a real difference”

By working multiple full and part-time jobs while attending undergraduate and law school, Olawale became a lawyer, and in 2014, was the first African-American ever to be nominated for judge in Delaware County, Ohio. It’s never been lost on him why he was able to achieve his dreams.

“I’m here today because of the opportunity made available to me by the likes of Dr. King, who spoke out when it was an inconvenience; sat down when it was not popular; spoke to the power when it was dangerous; and died for the cause he believed so that one day we could have the audacity to hope and to say ‘Yes We Can’,” Olawale said. “So someone like me, and others who look like me, can aspire for and actually achieve the American Dream.”

A capacity audience heard inspirational songs and words throughout the program. Ms. Anita Jones, a Product Specialist in Maritime Supplier operations, performed a “Poetic Oratorical,” urging those in attendance to exemplify the “power of the collective.” The Defense Federal Community Choir sang “Take Me to the King,” and the Genesis Dance Troupe performed a number called “The Heart That Forgives.”