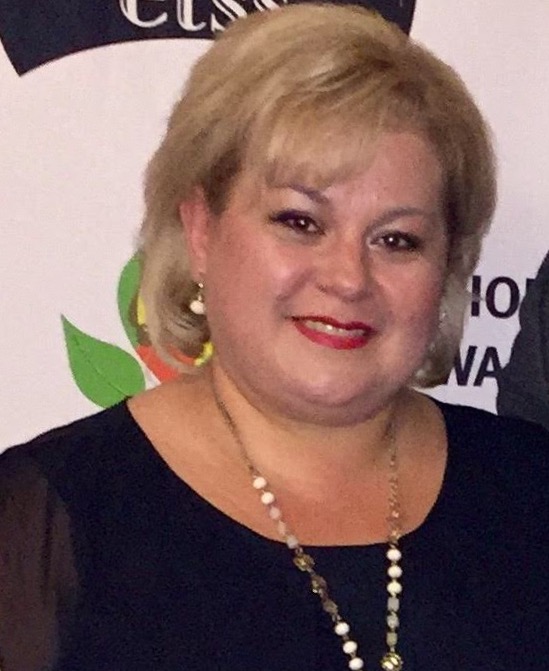 By Tatjana Bozhinovski
Photographs by Joel and Amy Harcar
On November 4, 2017 ETSS hosted their third annual Evening of Promise at a fully packed party venue, LaNavona in Gahanna. This fundraising event was so gratifying, full of fun, inspiring stories, laughter, and so much more. As I walked around throughout the evening, talking to people I met at last year’s event, meeting new, catching up with colleagues and friends, I could feel the positive atmosphere, the passion and love for helping, and a feeling of thankfulness and appreciation towards an organization that has done so much to help the new Americans in so many different ways.
The doors of LaNavona opened at 6:30 that Saturday evening, and waves of people started pouring in eager to see what the evening will bring. After registration, everyone made sure to explore the silent auction items spread in one of the rooms of the venue and start bidding.  There was so much to choose from: coffee kits, dinner packages, romantic getaways, sport events’ tickets, jewelry, art pieces and more. 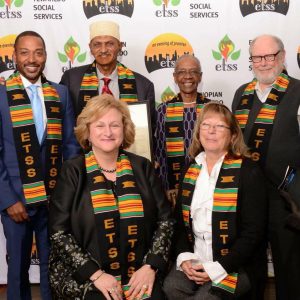 Dr. Darrell Mason Gray II, Gastroenterologist at the OSU Wexner Medical Center, and an ETSS Board Member was the Emcee for the evening. He welcomed all the guests and recognized elected officials in the audience. Among them were Franklin County Commissioner Kevin L. Boyce, Ohio State Representatives Davis Leland and Herscel Craig, and Clerk of Courts, Lori Tyack.
As dinner was served, Board Members and ETSS Administration honored several individuals, calling them “remarkable champions, who deserve recognition for their tireless advocacy in making immigrants and refugees in Columbus feel like a vital part of this great city”.
Advocate for the Community
Kathy Crandall, Director of Franklin County Homeland Security & Justice Programs
Advocate in the Community
Sharif-Ali Hashim, Somali community elder
Advocate in Medicine
Dr. Gail Besner, Chief of the Department of Pediatric Surgery at Nationwide Children’s Hospital
Advocate for Youth
William Sherry, Founder of The Ann Sherry Foundation
Advocate for the Neighborhood
Lela Boykin, Retired COO Neighborhood House 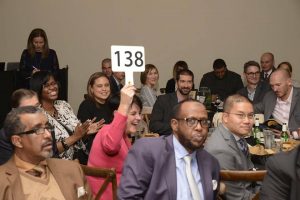 Each honoree received a crystal award and a very special kente stole, handcrafted by a local Ghanaian Master Weaver.
The keynote speaker for the evening was Commissioner Boyce who has been a friend of ETSS for a while. Dr. Gray described the Commissioner as someone who has always been so passionate in understanding the obstacles immigrants and refugees are faced with when they first come here. “After the most recent election, many local officials looked to Commissioner Boyce for leadership and guidance on how to support new Americans. He took this call for action very seriously and within a few weeks the New American Advisory Council was formed.”  After Commissioner’s speech about the importance of helping the new Americans in our wonderful city, he was also awarded with a kente stole.
We were then asked to turn our attention to the three photographs up front that I had wondered why they were there since I had entered the venue. They were beautiful photos of three beautiful women that I have known for a while and had the privilege to work with a couple of them. These photos were taken by Tariq Tarey and Laura Berger read their stories. One from Eastern part of China, one from Eritrea and the third from Nepal, the stories of Tursunay Awut, Nazarth Mesfin and Priya Sharma were beautiful. Each woman went through struggles that some of us cannot even imagine. They may have each had different battles in life, yet they all have one thing in common.
ETSS has been a part of their lives for the last few years. The ETSS family has “the privilege of working with people like Tursanay, Nazareth and Priya every day. It is a great honor to walk alongside them during their journey as they pursue their hopes and dreams for the future”, Laura said.  She urged everyone in attendance to help so ETSS can continue serving the immigrant and refugee community in Central Ohio.
After these beautiful stories of three amazing women, Dr. Gray urged everyone to help raise funds for ETSS programs and services by raising their paddles starting with $1,000, then $500, $250….Paddle after paddle were raised up in the air! With big smiles on their faces, so many opened their hearts and without any hesitation donated for such great cause.
With the generous donations of PNC Bank as a Gold Sponsor, Park National Bank and Molina Healthcare as the Silver Sponsors and more than a dozen of Bronze Sponsors, Ohio Capital Corporation for Housing as the Presenting Sponsor, dozens of kind contributions, all who contributed in “Raise the Paddle” and the total amount raised from the Silent Auction, Evening of Promise brought in $45,500. All net proceeds will benefit ETSS initiatives.
As the evening was coming to an end, I couldn’t help but think how much of hard work this was to plan and execute such an outstanding and successful event. Laura Burger was the one to organize this third in a row event, with the help of her Development Committee who worked tirelessly throughout the year to make this happen. With Dr. Gray as a Chair of the committee, the group meets monthly. They are already planning next year’s event. Because this year’s event was sold out quickly with a huge interest, the Committee is looking for a venue that will hold 400-500 people for next year.
Post Views: 1,493
Share!
Tweet

One Response to “Evening of Promise 2017”