Thursday, October 5, 2017, 25years’ old Ismail Ali Mohamed announced his intention to run for the Ohio State House of Representatives in District 25. The Political Science      graduate and a lawyer told the New Americans magazine that, “I have always been active in politics in the community. Politics is the best way you can bring about change in the  community. “

When the civil war started in Somalia, my family immigrated to Ethiopia as refugees. After about two or three years we immigrated to Kenya. We lived there for a couple of years as refugees. That was where I started attending school, elementary school and kindergarten. I did not come from a rich family but I got parents that tell me to get good education and that there is value in good education.
I was fortunate to come to the United States in 2005 as a young man and I attended elementary school here, Middle school, and graduated from the international Academy of Columbus.
I went to Northland High School in Columbus, Ohio. I was able to attend the Ohio State University where I got my Bachelor’s degree in Political Science that is when I became active in Politics.  I started working with agencies and departments involved in politics and immigrant community in Columbus, Ohio. I went back to college in 2014 for a law degree. I have finished my law degree becoming first Somali-American lawyer in the State of Ohio.
I have been doing quite a lot in the community, reaching out and educating a lot and doing a lot of community awareness programs in terms of voting and registration. I have received a lot of push from the community to consider political office. I have meant with a lot of community leaders, families and friends and I have announced my candidacy to run for the position of a legislator for District 25 in the State of Ohio.

America
We came straight to Columbus. I have seven siblings. Our dad was actually living here before us. He sponsored us. It was hard transitioning in the US especially with language barrier and culture shock. I kind of struggle in school starting out. But because I was much younger than most of my family members and friends I was able to learn and understand English much quicker. My background, from a Muslim and an African, was kind of a challenge. Once I got older things became better. High school was easier and college was much easier.
Education
It all started with my parents. Going back, my great grandfather was a teacher, and my grandfather was a teacher. We’ve been very active in education. I have been very fortunate to have parents who instilled in me the value of education. Even back in Africa, I always did well in school. When I came here, even though I would want to get out and have some fun, I always get that push from my parents to always excel in education. “Be that smart kid in the class. Sit in the front seat of the class and answer the questions.” Same with teachers and college instructors. It takes a village raise a child. Everyone has a kind of small influence in my life. I am much honored.
Political Science and Law
They kind of go together. I have always wanted to be in politics even when I was young. While a lot of my school mates then, struggled with what they wanted to do, I already knew what I was going to do. Looking back to Somalia, the civil war started in 1991 and no central government for a while, it’s  been difficult. Now you kind of see and understand the value of having a law, the value of having legal code and knowing the terminology and laws that prevent people from committing crime and making sure things are established as in constitution.  I always had this in my mind. Politics too. I have always been active in politics in the community. Politics is the best way you can bring about change in the community. Knowing local politicians, knowing about what is going on in the local politics. That was how I started. My mum wanted me to be a doctor. I knew it was not for me. I had to be honest with myself. I applied to law school. And I have never regretted going to law school. It was three years of painful and gruesome time but it was worth every bit. It is a useful education to have.

Response
It’s been  positive reaction from the community. A lot of people reached out to me and that they wanted to go to law school. They needed a role model. Everyone kind of recognizes me now and some wanting me to help out in some issues, especially immigration. But I always tell them I am into criminal law. However, they feel much comfortable walking up to someone who looks like them and with same culture. It shows the value of what I am doing and that is why I’m coming out. 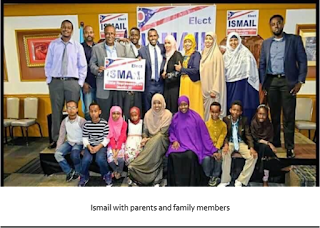 Position
I knew it will come. I have worked with the community a lot. I also worked with an NGO called Our Helpers that deal mostly with the immigrant community. I was able to meet and help a lot of people there. I got a lot of push from the community. They want me to represent them at the State level. It’s been very positive since I announced my intention. The whole of the community is coming together to support me. We just held the campaign kickoff and fund raising.
I live in District 25 and I understand the community. We will be reaching out to everyone in District 25 and we have put a strong team together. We will make sure that people are aware of our campaign. Everyone that we’ve met so far, has been very positive, especially seeing that a young person is coming out to run for elective office. I want to talk about specific issues and policies, especially gun violence in our community. It is a growing trend. I am running on the Democratic ticket. I have supported gun control. I have always been passionate about it. We will definitely be reaching out to everyone.
Post Views: 1,926
Share!
Tweet