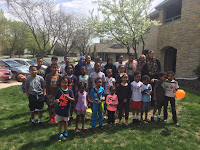 It is the dream of every    immigrant parent that his or her children that were born here or brought to this country at a very young age speak their native language and follow their country’s traditions. This is easier said than done for many. The native languages are spoken at home. But, for the biggest part of the day, the families are not at home together. The parents are responsible to provide for their families, therefore, they are at work for a big part of the day. Many of them have two jobs, so by the time they come home to the children, everyone’s asleep. When they are home, there are many things that need to be done around the house or errands that need to be run.
The children on the other hand are at school or at a daycare during the day, outside playing, listening and learning English.
As it is very well known, the youngsters absorb information much quicker than adults. So, in no time, they start communicating in English. Thanks to modern technology and social media, this is becoming easier and easier. Siblings start talking to each other in English at home. American culture is adapted quickly. This is hard for the parents to accept. They are happy that their children are striving in this new country, but, they also want their sons and daughters to remember their mother tongue, they want them to remember and practice their old traditions and look for ways how to solve this.
One of the solutions is a Sunday school. Parents bring their children to these schools where programs are developed and through fun activities and projects the children learn their native language, learn about their culture, history of their county and more. An example of this is Azza Sudanese School.
Located on 6047 Frantz Rd. suite 103A in Dublin, the Azza Sudanese School operates on Sundays from 10 a.m. to 2 p.m.
According to the Director of the school, Dr. Awatif Elnour, “about 30 American-Sudanese children, ages 6-14 attend every Sunday and are taught by four volunteer teachers who are experienced and professional educators.”
Using textbooks, audiovisuals, presentations and other interactive learning materials, such as fun games and group activities, the teachers teach Arabic, Islamic studies, and Sudanese culture and folklore, including art, music and ethnic dance.
The school’s Mission Statement reads exactly that: To Provide elements of Sudanese Culture, present a sound religious foundation, teach Arabic language, and prepare our future generation for a multi-cultural world.
The Sudanese community is not as large as some other immigrant and refugee communities in Columbus, Ohio. There are about 300 Sudanese in Central Ohio.
Dr. Awatif Elnour noted that, “In the early 1990s, then very small community, attempted a Sunday school, but the efforts were unsuccessful,” adding that, “there is currently another school in the area teaching only Arabic and Quran.”
Azza Sudanese School opened its doors in September 2016 with the intent to “consolidate the Sudanese American second generation identity and facilitate their integration to become good productive citizens of their two cultures; Sudanese and United States”, said Awatif.
Its founders are group of women who are members of the
Sudanese community in Columbus, Ohio and five designated members constitute the school administration:
Dr. Awatif Elnour: Director
Sumia Mohamed: Assistant Director
Amira Habib: General Supervisor
Amy Alhadi: Public Relations
Salma Gaily: Finance
The members of the administration are all volunteers, and no one, but two teachers who have nominal salaries, gets paid. Even the cost for the attendees is minimal. The parents pay a very small monthly payment that covers snacks, textbooks and a few class materials. ETSS donates the stationaries.
On the future plans, Dr Awatif explained that, “Our big plan can be summarized in two folds that are connected with each other. First, currently we have a temporary place and pay nominal fees for that. We are planning to have our own well equipped place in the near future which depends on funding possibilities; in order to cope with the student increment. Just this year our student number increased by 25% from the last year.
“Second, we are planning to register as a Non-profit organization and receive donations that will help in running the school and achieve its goals. Our goal in Azza Sudanese School is to provide our students with a unique experience and to have a blue print in Columbus, Ohio and bring the Sudanese youngsters and culture to the forefront of the discourse,” she added.
Post Views: 1,285
Share!
Tweet