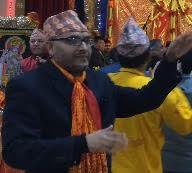 The Ohio State Governor John Kasich has appointed Kashi Adhikari of Columbus (Franklin County), a Bhutanese/Nepalese Community leader to the Asian American Pacific Islander Advisory Council for a term beginning September 12, 2017, and continuing at the pleasure of the Governor.
The Ohio Asian American Pacific Islander Advisory Council, OAAPAC was established September 27, 2007 through a Directive Order by former Governor Ted Strickland.
And in May 2011, Governor John Kasich issued an Executive Order 2011-09K establishing OAAPAC.
The Council promotes Asian American Pacific Islanders (AAPI’s) rights and well-being through education and mobilization of all stakeholders including AAPI communities, government agencies, and the Ohio society in general.
In his response to the appointment, Kashi Adhikari told the New Americans that “I am excited and very happy for the appointment. It shows the State government is following what we are doing to integrate our community with the larger society in Ohio.
“I look forward to contributing my garnered experience in the last eight years to improving lives, standard and wellbeing of our community. The new American community will surely be excited by this,” he added.
Post Views: 2,594
Share!
Tweet