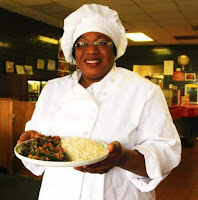 “Cuisine include jollof rice, very popular food within West Africa, and pounded yam, made from African yam which is pounded; it goes with several soups which include the egusi soup made from special West African melon seed, cooked with spinach and some herbs and distinct tropical ingredients with different choices of meat like goat meat, chicken, beef, and fish,” Esther Ajiboye, co-owner of Intercontinental Restaurant on Cleveland Avenue, Columbus, Ohio reeled out effortlessly as the commander-In-Chief of the restaurant.

“This restaurant is like an embassy here in Columbus where people meet and interact and even get information about living in Columbus.”

The former banker who, about five years ago, partnered with the husband in opening the Intercontinental Restaurant, also known as Lagos Peppersoup Corner, told the New Americans that “Cooking is my passion, I love cooking, and it gives me joy and pleasure. It did not start here in America, it started back in Nigeria where I just love to cook and feed people.”
According to her, “I saw the niche, especially in Columbus. There are people who are hungry and can’t really find the home-based traditional dishes and I felt that this is my passion.”
Also on the menu list are “spinach soup with various spices including meat, dried fish and shrimps to give it good flavor. Also we have the okra soup. It is slow cooked in a traditional way with traditional African spices along with meat. In all the soups we use palm oil.
There is Afam soup which is loved by Nigerians and Cameroonians who know it as ‘eru’. There is also the Nkwobi, a special delicacy which is made from cow skin with special African spices. We have the rice and beans special. There is pepper soup which could go with goat meat, assorted meat and fish. Special African fried rice using the parboiled rice is a delicacy on its own. There is the porage beans with fried plantain; bean soup known as gbegiri and jute leave soup known as ewedu. We have amala or elubo (yam flour) which some refer to as cocotte. We have meat pie, beef, and special meat called suya.”

“It is a city that accommodates immigrants. It is a very welcoming city in Ohio State. Grateful to the government and the people of Columbus.”

“It’s not just a restaurant”, Ajiboye noted, “This restaurant is like an embassy here in Columbus where people meet and interact and even get information about living in Columbus. We’ve been able to assist a lot to transition here in Columbus. People want to know nice areas to live in. A lot of people have been assisted in many ways. A lot of people are coming to live in Columbus because of the good news they are hearing about the city. They’ve heard that Columbus is a family based city. In that way we are contributing our own part to the development and growth of the city of Columbus.  It is a city that accommodates immigrants. It is a very welcoming city in Ohio State. Grateful to the government and the people of Columbus.”
Modern day technology has made accessibility to the restaurant a one-touch order online. “We provide services like dine-in, carry-out option and we have the delivery service using the Grubhub and the SkiptheDishes. It is done online, and customers go to Intercontinental Restaurant. Our menu are loaded on the site and customers can order what they want and the delivery fee is very minimal. The meal is delivered hot. We get a lot of orders through this. But some order online and pick up themselves.
Other services provided by Intercontinental Restaurant include “wedding caterings and we’ve catered for numerous, weddings, birthday parties and graduations.”
Post Views: 1,633
Share!
Tweet