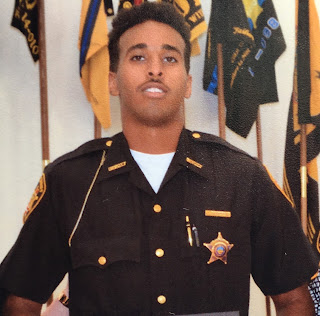 He walked straight to the door of the meeting room as if he has been there before. Nothing exposed him as a cop; his disarming smile, friendly handshake and hug were just natural. But 22-years old Ahmed Shukri, from Hilliard is a Deputy Sheriff with the Franklin County, Columbus, Ohio.
While acknowledging the enormous challenges of being a law enforcement officer, Ahmed carries the banner of a pacesetter – the first Somali American – not only in Franklin County but in the State of Ohio.
Ahmed immigrated to America with his parents and siblings, as a 4-year old in 1999. At that age it was easy for him to blend with other kids at school though he could still recollect the elder brother going through ESL, English as a Second Language class.
Describing himself as “very caring, funny and hardworking,” Ahmed decided to become a Deputy Sheriff because he “found out that we (Somali community) did not have any Somali American Police Officer in Columbus or even in Ohio. I wanted to represent our community and be a voice.”
He took up the challenge and joined in March of 2015. The expected rigorous training at the Academy did not deter him as according to him, “The training in the Academy was not easy at all. Many highs and lows but it was all worth it. Law Enforcement is not an easy career but if you want to be in it and it matters to you, nothing will stop you, even the training.”

Ahmed Shukri stood out from the rest, showing himself to be a positive-minded leader.
Ahmed was never a “dull” kid. He had fun and he’d often lift weights and play basketball with his friends. With Shukri, there was a level of maturity and politeness. Respect was given to each of the leaders at the Y. Because of his maturity I grew to expect more and more from him.”

Graduating from the Academy and finally realizing his dream of becoming a pacesetter for one of the largest community in Columbus, Ahmed said, “I feel humbled and honored. To be the first in anything is a great achievement. I am just humbled that I get to represent a community that has shown me so much support and love. I became a Deputy to make a difference and I already did just that by becoming the first Somali American officer in the state of Ohio.”
In acknowledging the support from the community, he said that, “the Somali community has shown great support. Sometimes I feel like I am a celebrity even though I am just a Deputy Sheriff with all the love and praise I get. It only makes you want to work harder and continue to do great things when you have a whole community trying to support you and depend on you. Definitely it keeps you motivated.” 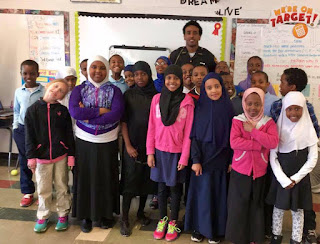 Ahmed’s encouragement for other youths is that “I am not special, I just worked hard and stayed away from all the negativity that is surrounding the youths nowadays. Anything is truly possible but you have to work for it and stay on the course.”
He has been speaking at schools and community programs to encourage and motivate the youths since becoming a Deputy Sheriff.
The basketball loving officer believes that in two to three years, “hopefully I see myself continuing to grow as a Deputy and continue to better serve the citizens of Franklin County.” 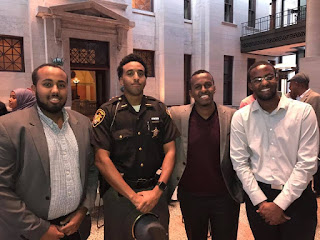 And with such aspiration, Malik Wayne Moore, Executive Director of Responsibility, YMCA, Central Ohio who once had contact with Ahmed as a teenager said about him: “The Y can be busy and noisy in the evening, with many teens coming to burn off energy that built up all day during the school. It wasn’t always pretty in the gym – with 50 teens eager to play basketball. For the most part, we knew “teens will be teens” but Ahmed Shukri stood out from the rest, showing himself to be a positive-minded leader.
Ahmed was never a “dull” kid. He had fun and he’d often lift weights and play basketball with his friends. With Shukri, there was a level of maturity and politeness. Respect was given to each of the leaders at the Y. Because of his maturity I grew to expect more and more from him.”
Post Views: 2,086
Share!
Tweet