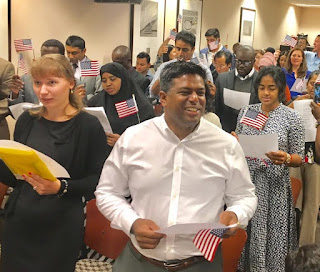 The U.S. Citizenship and Immigration Services (USCIS) will celebrate the 241st anniversary of the Declaration of Independence by welcoming nearly 15,000 new U.S. citizens during more than 65 Independence Day-themed naturalization ceremonies across the country this year.
“July Fourth marks the birth of our country, and for 15,000 people, it marks the birth of a new chapter as American citizens,” USCIS Acting Director James McCament said.
According to him,“These new members of our community will add to the diverse fabric of our nation and will now be able to enjoy the rights, privileges, and responsibilities of U.S. citizenship.”
USCIS’ Independence Day activities this year will feature a naturalization ceremony at the National World War II Museum in New Orleans, Louisiana, on July 3.
During this event, McCament will administer the Oath of Allegiance and deliver congratulatory remarks to 49 new Americans. The ceremony is expected to be streamed live on Facebook.
Other ceremonies include events at:
Congaree National Park in Hopkins, South Carolina, on July 3.
Saratoga National Historic Park in Stillwater, New York, on July 4.
Calvin Coolidge Homestead in Plymouth, Vermont, on July 4.
Saguaro National Park West in Tucson, Arizona, on July 4.
Thomas Jefferson’s Monticello in Charlottesville, Virginia, on July 4.
Battleship New Jersey in Camden, New Jersey, on July 4. Follow us on Facebook to view a live stream of this ceremony.
George Washington’s Mount Vernon in Mount Vernon, Virginia, on July 4.
Post Views: 1,483
Share!
Tweet