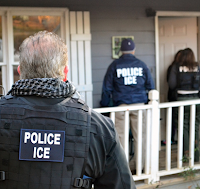 The United States Immigration and Customs Enforcement, ICE said it deported 240, 255 individuals in fiscal year (FY) 2016.
A statement from the ICE stated that “of this total, 174,923 were apprehended while, or shortly after, attempting to illegally enter the United States. The remaining 65,332 were apprehended in the interior of the United States, and the vast majority were convicted criminals.
Meanwhile, officers with U.S. Immigration and Customs Enforcement’s (ICE) Enforcement and Removal Operations (ERO) arrested a self-admitted MS-13 gang member February 16 after he was released from New York City custody with an active ICE detainer in place.
The Salvadoran national has a criminal history in the U.S. which includes reckless endangerment in the second degree, criminal possession of a weapon in the fourth degree, and disorderly conduct.
An immigration detainer is a tool used by ICE and other Department of Homeland Security (DHS) officials to identify potentially deportable individuals who are housed in jails or prisons nationwide
Estivan Rafael Marques Velasquez was released from local custody February 16, after serving time for a criminal conviction of disorderly conduct.  ICE filed the detainer May 3, 2016 with the Rikers Island Correctional facility where he was released with disregard for the active detainer.  Marques entered the United States without being inspected by an immigration officer.  On July 28, 2014, he was issued a Notice to Appear. In November 2015, Marques was ordered removed by an immigration judge.
ERO officers arrested Ramos-Flores February 16 in Queens, New York, pursuant to a final order of removal.  He has been processed and is now in ERO detention pending removal.
“This man is by his own admission a member of a violent street gang and he was released back into the community.  Honoring a detainer request is not about politics, it is about keeping New York citizens’ safe,” said Thomas R. Decker, field office director for ERO New York.
“ICE continues to welcome changes to the city’s current policy which is creating a potentially unsafe environment for its residents.  ICE remains steadfast in solidifying its relationship with local law enforcement in the interest of public safety and national security.”
Post Views: 1,182
Share!
Tweet