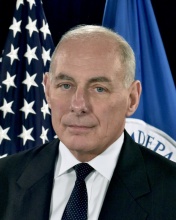 The  United States Department of Homeland Security has released new guidelines on its immigration policy Tuesday, February 21, 2017 which put any immigrant in the U.S.  illegally at risk of deportation.
Reports monitored on Houston Chronicle News said that “under the new memorandums, immigration agents are instructed to deport anyone convicted of a criminal offense, including those driving without a license.”
Parents who seek to send their children here illegally could also be prosecuted for smuggling if they are identified by federal agents.
“DHS shall ensure the proper enforcement of our immigration laws against those who — directly or indirectly — facilitate the smuggling or trafficking of alien children into the United States,” the agency said in a release.
“This includes placing parents or guardians who are removable aliens into removal proceedings, or referring such individuals for criminal prosecution.”
The policy also calls for an expansion of a process known as expedited removal, which allows agents to deport more people immediately. Previously it was only used within 100 miles of the border for immigrants who had been in the country no more than 14 days. Now it will include those who have been in the country for up to two years and who are detained anywhere in the nation.
Agencies are required to hire 10,000 new immigration agents, 5,000 Border Patrol agents, and increase the number of federal detention facilities.
It also would expand the use of a controversial program known as 287 (g,) which allows local law enforcement to help enforce federal immigration law. The program has been accused of leading to racial profiling and under the Obama administration was greatly scaled back.
Post Views: 1,192
Share!
Tweet